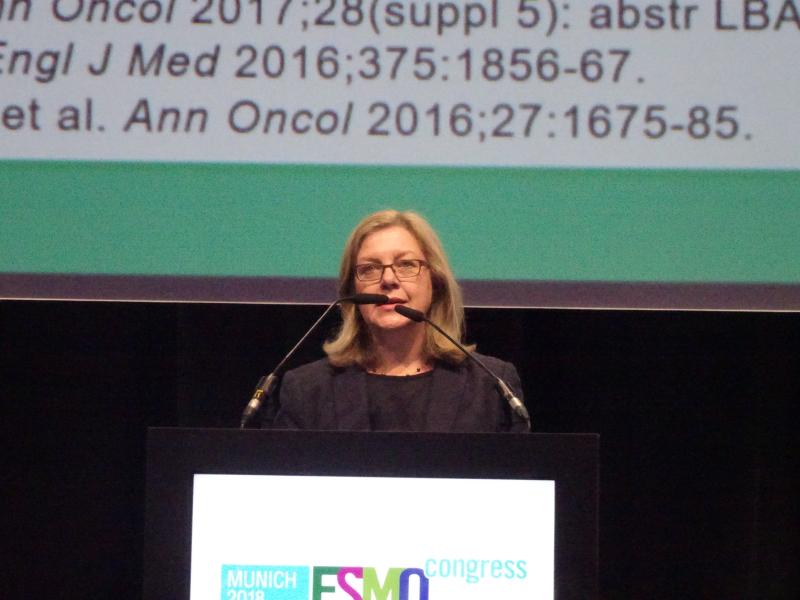 The anti-PD-1 immunotherapy pembrolizumab confers survival benefit over standard chemotherapy in patients with recurrent or metastatic head and neck cancer in the first-line setting, reveals the topline results of the KEYNOTE-048* study presented at ESMO 2018.

Previously, pembrolizumab has been approved for second-line treatment of advanced head and neck cancer, and this study is the first to investigate immunotherapy use for these patients in the first line.

In the phase III open-label study, 882 patients with head and neck cancer not curable by local therapy and who had not received prior systemic therapy for recurrent or metastatic disease were randomized 1:1:1 to pembrolizumab monotherapy 200 mg Q3W (Arm A), pembrolizumab + chemotherapy comprising carboplatin AUC 5 or cisplatin 100 mg/m2 + 5-fluorouracil (FU) 1,000 mg/m2/day (Arm B), or standard-of-care chemotherapy with cetuximab 250 mg/m2 added to the aforementioned chemotherapy (Arm C)**. [ESMO 2018, abstract LBA8_PR]

The results were presented in two parts: Arm A vs Arm C in patients stratified by PD-L1 expression, and Arm B vs Arm C in all comers.

Pembrolizumab vs chemo in stratified patients

“Patients with PD-L1 expression live longer when they have initial treatment with pembrolizumab,” pointed out Professor Barbara Burtness of Yale School of Medicine in New Haven, Connecticut, US.

“Pembrolizumab appears to prolong life even when the cancer continues to grow, suggesting that it should be a first-line therapy in recurrent and metastatic head and neck cancer,” said Burtness.

Furthermore, pembrolizumab showed a favourable safety profile compared with standard chemotherapy for the whole population, she added, with lower incidence of any-grade, grade 3-4, and grade 5 treatment-related adverse events (TRAEs), as well as lower incidence of TRAEs leading to discontinuation.

Pembrolizumab + chemo vs chemo in all comers

In the second part of the study comparing Arm B vs Arm C, OS remained significantly longer by 23 percent with pembrolizumab + chemotherapy vs standard chemotherapy in all comers (median, 13.0 vs 10.7 months, HR, 0.77; p=0.0034).

Safety profile was comparable between the two arms, with similar incidence of any-grade, grade 3-4, and grade 5 TRAEs. The was no unexpected toxicity in the pembrolizumab + chemotherapy arm, said Burtness.

“Whether pembrolizumab [should be] given alone or with chemotherapy may depend on PD-L1 expression and we are conducting analyses to answer this question,” said Burtness.

Invited discussant Dr Jean-Pascal Machiels of Cliniques Universitaires Saint-Luc in Brussels, Belgium, noted that although frontline pembrolizumab monotherapy showed clinically relevant survival benefit in patient subgroup with PD-L1 CPS ≥20, the survival curves of Arms A and C did not separate until 6 months into the therapy.

He asked whether clinicians “are taking risk” by giving pembrolizumab first-line in this group of patients, noting that the ORR was also lower with pembrolizumab vs chemotherapy in the first few months.

He suggested that for patients who need rapid tumour shrinkage with no data on PD-L1 expression, the combination of pembrolizumab + chemotherapy may be used first-line. For patients in stable conditions, PD-L1 levels should be assessed and pembrolizumab alone could be the new standard of care for those with PD-L1 CPS ≥20.