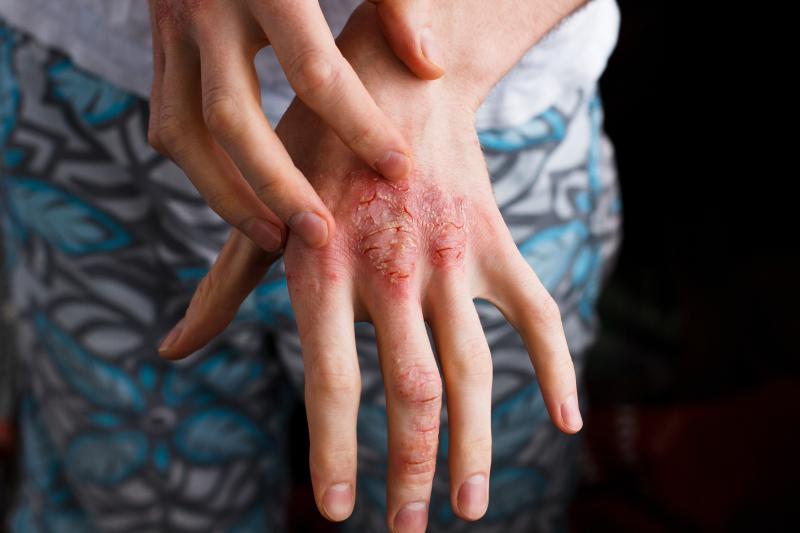 The search for chronic hand eczema (CHE) relief has led to two different Janus kinase (JAK) inhibitors, one topical and the other oral, with both performing well in phase IIb trials reported during the 29th European Academy of Dermatology and Venereology (EADV) Virtual Congress.

Topical corticosteroids are commonly used for treatment, but the associated risks of atrophy and cracked skin limit their use, according to presenting author of the first trial Dr Margitta Worm of Charité University Hospital in Berlin, Germany.

“Delgocitinib is a novel pan-JAK inhibitor blocking all four members of the JAK family (JAK1–3 and tyrosine kinase 2),” having potential anti-inflammatory effects, she said.

The majority of the population (56 percent) had moderate eczema, while 20 percent had severe and 24 percent had mild. Median Hand Eczema Severity Index (HECSI) score at baseline was 44.5.

Delgocitinib doses of 8 and 20 mg/g exhibited the greatest efficacy. By week 16, 36.5 percent and 37.7 percent of patients in the corresponding dose groups were clear or almost clear of symptoms (Investigator’s Global Assessment for CHE [IGA-CHE] score of 0 or 1) as opposed to only 8 percent in the vehicle group (p=0.0004).

Skin clearance occurred as early as the fourth week in the 8 mg/g group and the sixth week in the 20 mg/g group. Furthermore, all active delgocitinib doses produced significant improvements in HECSI score from baseline to week 16 compared with the vehicle (p<0.05).

Neither safety-related dose response nor safety signals emerged, Worm noted. Most adverse events were mild or moderate in severity and considered to be unrelated to treatment. Nasopharyngitis, eczema, and headache occurred most frequently.

Meanwhile, some patients with CHE do not respond to topical medications, and they may be prescribed systemic anti-inflammatories. Another team of researchers evaluated the efficacy of a novel oral dual inhibitor of JAK and spleen tyrosine kinase (SYK), gusacitinib, in moderate-to-severe CHE patients in a randomized, placebo-controlled trial.

“Hence [the drug] can simultaneously target both the immune cells and epithelial cells involved in CHE and other dermatologic and inflammatory conditions,” Sofen added.

In total, 97 patients (average age, 45 years; 70.57 percent female) were randomized to receive once-daily treatment with either placebo or gusacitinib at 40 or 80 mg for 16 weeks. Physician Global Assessment (PGA) was 3 or 4 at baseline, and all patients were refractory to topical or systemic corticosteroids (moderate, high, or ultra-high potency).

At week 16, the modified total lesion severity score (mTLSS) shed down by as much as 69.5 percent with gusacitinib 80 mg. In comparison, there was a relative decrease of 49.0 percent with the 40-mg dose and of 33.5 percent with placebo (p<0.005). Active treatment produced a 66- and 50-percent improvement, respectively, in the mTLSS pruritus subscore.

The drug was well tolerated at both dose levels. Adverse events were typically mild-to-moderate and of short duration. The most common of these were upper respiratory tract infection, headache, nausea, and nasopharyngitis. There were no thromboembolic events or opportunistic infections recorded.

In light of the findings, Sofen believes that gusacitinib represents a potential new oral treatment for patients with moderate-to-severe CHE and other inflammatory dermatological diseases.