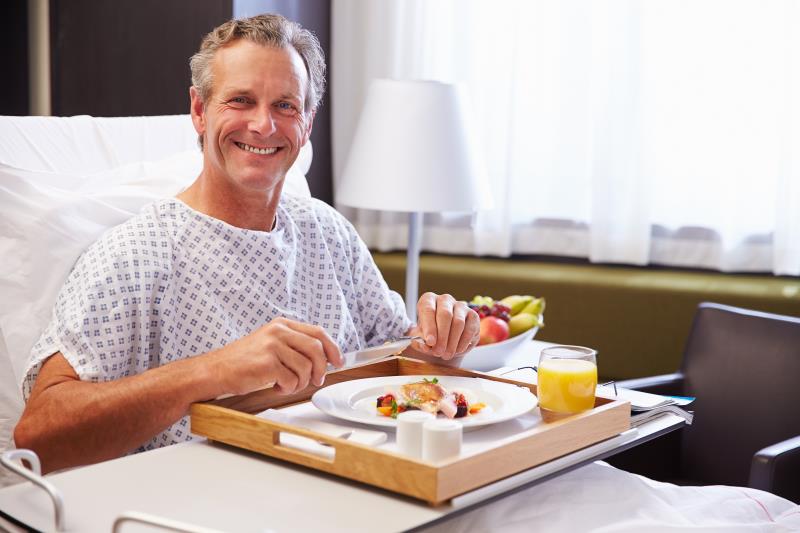 Adopting a low-microbial, protective (neutropenic) diet offers no clear benefit to patients following hematopoietic stem cell transplantation (HSCT) in a study described as the first to investigate the role of a neutropenic diet post-HSCT.

Patients who were on a protective diet following autologous or allogeneic HSCT had similar rates of infection as those on a nonrestrictive diet.

“This suggests patients do not need to restrict themselves to unpalatable hospital foods while in confinement,” said presenting author Dr Federico Stella of the Università degli Studi di Milano - Istituto Nazionale dei Tumori in Milan, Italy at ASH 2022.

The rates of gastrointestinal infection were also comparable between the two groups (7 percent vs 3 percent in the protective and nonrestrictive arms, RR=2.7; p=0.2). Clostridium difficile was the most common bacteria found in stool tests in both groups.

“This suggests that the use of a restrictive diet is an unnecessary burden for patients’ quality of life,” said Stella during the press briefing. “Infections are frequent complications post-HSCT, and the use of a low-microbial, protective diet is a standard of care adopted in about 90 percent of bone marrow transplantation centres to prevent infections.”

The diet only allows foods cooked at about 175°F. He added that despite its widespread use, its efficacy in preventing infection had not been prospectively evaluated in a randomized controlled trial.

No difference in other outcomes

The multicentre, noninferiority, phase III study included 224 patients with haematologic diseases (38 percent had myeloma, 37 percent had lymphomas, and 5 percent had acute myeloid leukaemia). Over 75 percent of the patients received autologous HSCT, 21 percent received allogeneic HSCT, and 6 percent underwent high-dose induction chemotherapy. They were randomly assigned 1:1 to a low-microbial, protective diet or a nonrestrictive diet of traditional hospital foods which included fresh fruits, vegetables, cold cuts, pasteurized honey, and yoghurt from the start of their chemotherapy until their neutrophils returned to normal levels. [ASH 2022, abstract 169]

There were no significant differences between the protective and nonrestrictive diets even in the incidence of nausea and mucositis, body weight variations, length of hospital stay, use, and duration of parenteral nutrition.

Acute graft-versus-host disease grade ≥2 in allogeneic-HSCT patients was 17 percent and 25 percent (RR, 0.7; p=0.7) for the protective and nonrestrictive diets.

“I love this trial because of how it upends the dogma,” commented press briefing moderator Dr Mikkael Sekeres from the University of Miami Miller School of Medicine in Miami, Florida, US. “For decades, we have been essentially putting patients hospitalized for 4–6 weeks on a neutropenic diet, and they hate it because they tend to be bland unexciting meals.”

The intention to minimize infection is good, but Sekeres said putting patients on a restrictive diet doesn’t make sense. “I eliminated this diet for my leukaemia patients years ago. I’ve been practicing for 20 years taking care of patients with acute  leukaemia and I have never seen a patient who has gotten seriously ill or died of foodborne infection.”

“I think the take-home message is we should do away with these neutropenic diets, allow patients to eat within reason to give them a much better quality of life while they’re in the hospital for a transplant procedure.”