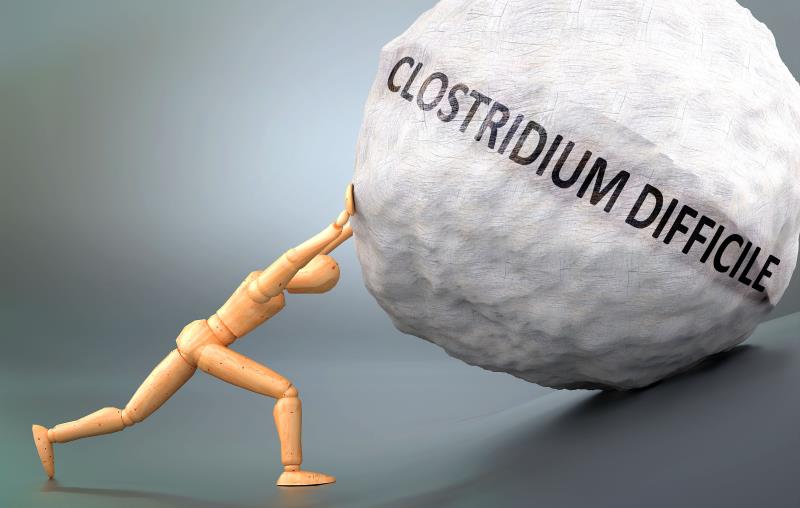 Exposure to broad-spectrum antibiotics is the leading risk factor for CDI, as this causes collateral damage to beneficial microbes normally residing in the gut microbiome. [mSphere 2016:1:e00045] Antibiotics targeting C. difficile are often inadequate owing to their lack of effect on C. difficile spores germinating within a disrupted microbiome. [Nat Rev Dis Primers 2016:2:16020] “Thus, a sustained response is not attained in a substantial proportion of patients,” the investigators noted.

“[These results translate] to a relative risk reduction of almost 70 percent which, for patients of this pedigree and from a clinical perspective, is [an] impressive reduction,” said Dr Mark Wilcox from Leeds Teaching Hospitals NHS Trust, Leeds, UK, at ECCMID 2022.

“The reduction of recurrence was very consistently maintained at 12 and 24 weeks. This is not simply putting off recurrence until a later time; it is preventing recurrence,” Wilcox pointed out.

“The Kaplan-Meier curve … [shows] a very sharp risk period,” he continued. There was an early risk of recurrence, but the curves separated rapidly. “Interestingly, the SER-109 curve stayed fairly flat, [with] very few recurrences from weeks 10 through 16. [Whereas in the placebo arm,] there was a steep decline in the incidence of recurrence … [but there were] more recurrences continuing.”

The incidences of treatment-related/possibly related treatment-emergent adverse events (TEAEs) between the SER-109 and placebo arms were similar, the most frequent being flatulence (43 percent vs 45 percent), abdominal distention (31 percent vs 29 percent), and abdominal pain (28 percent vs 36 percent). Wilcox remarked that these data “give confidence that SER-109 is not inducing AEs of consequence.”

While there were three deaths in the SER-109 arm as opposed to none in the placebo arm, none were deemed drug-related.

A total of 281 participants with recurrent CDI* were screened. Of these, 182 toxin-positive adults (mean age 65.5 years, 60 percent female) with symptom resolution following standard-of-care (SoC) antibiotics were randomized 1:1 to receive either once-daily SER-109 (four capsules x 3 days) or matching placebo. About 40 percent of participants had ≥4 recurrences. “This is bad news from a patient’s perspective, as it is very hard to sustain effective clinical cure and prevent recurrence in such patients,” Wilcox said.

“[Nonetheless,] the favourable impact of SER-109 … observed as early as 4 weeks post-treatment and sustained through 24 weeks [highlights] the clinical benefit of early microbiome repair,” he continued.

“This two-pronged therapeutic approach … of giving SoC antibiotic and a microbiome dysbiosis drug to address the issue does seem to be associated with a very significant … change in the risk in preventing CDI recurrence,” said Wilcox. “As such, SER-109 may represent a potential paradigm shift in the clinical management of patients with recurrent CDI.”