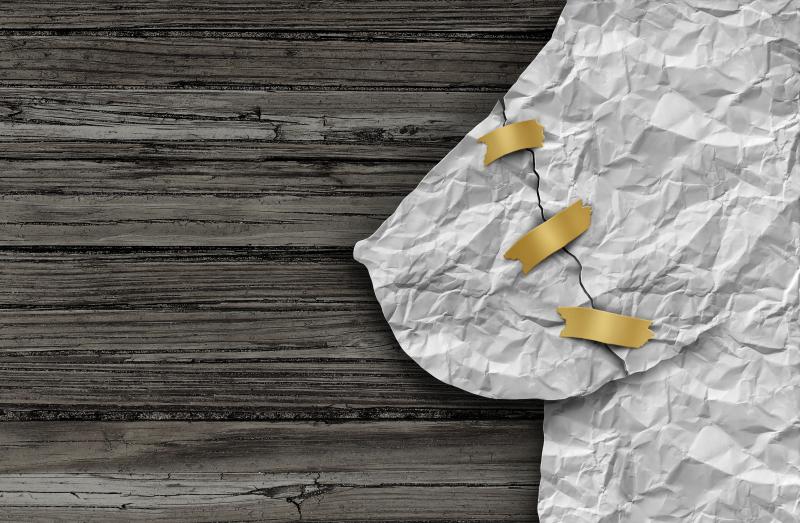 Undergoing a bilateral risk-reducing mastectomy (BRRM) appears to improve breast cancer-specific survival (BCSS) and overall survival (OS) in healthy women who are carriers of the BRCA1 mutation, according to a study from The Netherlands. Conversely, women carrying the BRCA2 mutation had similar BCSS regardless of whether they underwent BRRM or surveillance.

“For BRCA1 mutation carriers, BRRM not only drastically reduces the risk of developing breast cancer but, as a consequence, also improves BCSS when compared to surveillance. For BRCA2 mutation carriers, however, BRRM seems to lead to similar BCSS as surveillance, despite the reduced breast cancer risk,” said study author Dr Annette Heemskerk-Gerritsen from the Erasmus University Medical Centre in Rotterdam, The Netherlands, at the recent European Breast Cancer Conference (EBCC 2018).

Using the Hereditary Breast and Ovarian Cancer Netherlands (HEBON) database, researchers identified 1,696 BRCA1 and 1,139 BRCA2 mutation carriers with no history of cancer and who at time of DNA diagnosis, had both breasts and both ovaries. They were followed from time of DNA diagnosis to death or last follow-up appointment (June 2017), during which time 38 and 32 percent of women with BRCA1 and BRCA2 mutations, respectively, underwent BRRM.

“BRCA2-associated cancers were diagnosed at an older age, better differentiated, and were more likely to have receptors for the hormones oestrogen and progesterone and for the human epidermal growth factor [HER2], suggesting that BRCA2 mutation carriers face a better prognosis at diagnosis than BRCA1 mutation carriers,” said Heemskerk-Gerritsen.

“Women who carry the BRCA1 or BRCA2 gene mutations face real uncertainty about how to reduce their risk of developing breast cancer and the risk of dying from the disease. A double mastectomy is invasive and can have uncomfortable, sometimes serious, adverse effects afterwards … but would seem to reduce the risk of developing the disease. However, women who opt for surveillance live with the knowledge that the disease could develop and then they will have to go through treatment. These are hard choices and every woman is different,” said EBCC co-chair Professor Isabel Rubio from the Clinica Universidad de Navarra in Spain, who was not involved in the study. She advocated for more research into determining the age at which women with these mutations would reap the most benefits be it from surgery or surveillance.

“For those BRCA2 mutation carriers who are struggling with the difficult choice between breast cancer surveillance and BRRM because they wish to keep their breasts, and who are willing to face the risk of developing breast cancer and undergoing essential treatment after diagnosis, it might be a relief to know that ongoing intensive surveillance may be as good as BRRM when it comes to BCSS. Our findings contribute to a more individualized counselling process regarding the difficult choice between BRRM and surveillance based on the type of BRCA mutation,” said Heemskerk-Gerritsen.