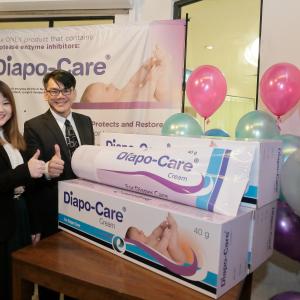 Perianal dermatitis or diaper rash is preventable with proper precautions
Pank Jit Sin, 16 Oct 2018
Diaper rash or perianal dermatitis is a common condition among young infants. It is a form of skin inflammation characterized by red and tender-looking skin in the diaper region—encompassing the buttocks, thighs and genitals. Chronic pruritus is a diverse and aetiologically complex skin condition and thus requires a similarly comprehensive treatment approach, according to Dr Siti Aisah who gave a lecture at the recently concluded 23rd Regional Conference of Dermatology (RCD 2018) in Surabaya, Indonesia.

“At present, there is no universally accepted therapy for dry skin and chronic pruritus,” she said, adding that “moisturizers [are] the most important topical therapy, but moisturizers do not directly relieve [chronic pruritus].”

According to the International Forum for the Study of Itch, pruritus is characterized as the unpleasant sensation that leads to the desire to scratch. It can be classified into two: acute pruritus, which is generally linked with allergic reactions, and chronic pruritus, which is a persistent condition lasting for more than 6 weeks.

Although its clinical manifestations and causes are well-documented – drug allergies, hypersensitivity and scaly skin, among others – the underlying pathophysiological mechanisms are scarcely known.

Various factors, both internal and external, can contribute to the onset of dry skin. For instance, ageing, habits and behaviour, and the environment are all such factors.

Moreover, genetics can both directly predispose an individual to dry skin or trigger a variety of changes which, in turn, lead to dry skin: low skin hydration, low intracellular lipid concentrations, low production of sweat and sebum, and low levels of itch sensation.

Over time, dry skin can progress to pruritus and eventually, with the addition of nondermatologic factors such as psychogenic, systemic and neurogenic conditions, chronic pruritus.

At this stage, scratching can intensify and lead to a defective skin barrier. This can trigger cascades of inflammatory mediators and neuropeptides, further aggravating the underlying pruritus. According to Aisah, this feedback loop is called the itch-scratch cycle.

In this series of events, removing the initial causes of dry skin and pruritus and administering the appropriate systemic therapies (eg, antihistamines and antidepressants) are the most basic steps in the management of chronic pruritus. However, topical therapy is also important to improve skin barrier function and relieve pruritus symptoms.

According to guidelines set by the European Dermatology Forum, in cooperation with the European Academy of Dermatology and Venereology, and to a 2017 expert consensus review by Rajagopalan et al, the use moisturizers is an important part of chronic pruritus management. However, little additional information is available.

There are generally three basic classifications of moisturizers, Aisah explained: emollients, which smooth scales and repair the skin barrier, occlusives, which protect against trans-epidermal water loss, and humectants, which attract water and rehydrate the stratum corneum. There are also newer and modified products, which may contain anti-inflammatory and therapeutic agents.

There are also different types of moisturizer formulation, she added. Ointments, for example, are the greasiest and used in cases of extreme drying and severe itching. On the other hand, creams are less greasy and used for moderate pruritus, while gels are either aqueous or alcoholic emulsions typically used for dry skin.

On the other end of the spectrum are lotions, which are high in water content and easier to spread. However, they are less effective as emollients and are generally used for light pruritus and mild dryness.

In terms of best practices, moisturizers should be able to hydrate the skin, restore the lipid barrier and reduce the clinical signs of dryness. Furthermore, it should be hypoallergenic, cosmetically acceptable and affordable, said Aisah.

Moisturizers should be applied “2–3 times a day unless there is a need to increase frequency,” she continued. It is also best to apply moisturizers immediately after washing or bathing to keep the moisture inside the skin.

Because of its diversity, knowing how to select the proper moisturizer is essential for effective management. For example, in mild skin conditions, lotion-formulation emollient moisturizers are generally the product of choice. In comparison, severe conditions usually require humectants of the ointment formulation.

“State the severity of skin condition, itch and pruritus, then select the proper moisturizer and appropriate formulation,” Aisah instructed. “Systemic therapies should be considered for severe and generalized itch.”

It is also important to have holistic patient management strategies and multidisciplinary treatment approaches, considering that chronic pruritus is not only a disease of the skin and that there may be underlying systemic or psychogenic causes, said Aisah.

Perianal dermatitis or diaper rash is preventable with proper precautions
Pank Jit Sin, 16 Oct 2018
Diaper rash or perianal dermatitis is a common condition among young infants. It is a form of skin inflammation characterized by red and tender-looking skin in the diaper region—encompassing the buttocks, thighs and genitals.