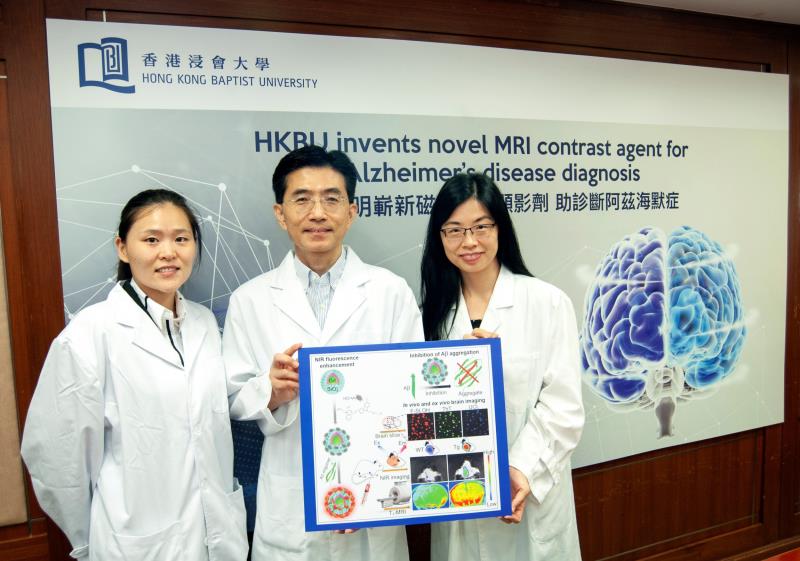 Researchers from the Hong Kong Baptist University (HKBU) have developed a novel contrast agent for brain MRI that enables real-time visualization and assessment of the size and number of amyloid-beta (Aβ) oligomers, a peptide that putatively plays a seminal role in synaptic loss in Alzheimer's disease (AD).

Real-time visualization of Aβ contents in the brain is crucial for the diagnosis of AD and monitoring of the disease’s progression. While this can currently be achieved with the aid of PET imaging, this method is expensive, invasive and radioactive, with limited image resolution. “On the other hand, MRI offers high spatial and temporal resolution and is minimally invasive since it does not require the use of a radiotracer, and is [therefore] more widely used. However, MRI is a relatively insensitive technique that often requires a targeted contrast agent to reinforce the image contrast in the region of interest,” wrote the researchers. [Adv Mater 2009;21:2133-2148; Coord Chem Rev 2016;327:27]

The novel nanomaterial developed by HKBU researchers for Aβ imaging loads and coats Gd3+-based NPs with a specially designed silica layer that can accommodate a proprietary, noncytotoxic organic fluorescent cyanine dye, F-SLOH, which aids visualization and quantification of Aβ oligomers. [Adv Funct Mater 2020:1909529] “Importantly, the F-SLOH surface-functionalized Gd3+-based NPs were found to be biocompatible, biostable, cell membrane permeable, nontoxic, and capable of penetrating the blood-brain barrier [BBB], with a fast washout from the liver and kidney,” highlighted the researchers.

To confirm BBB permeability, the new imaging agent was introduced into 9-month-old transgenic mice that overexpressed Aβ species and age-matched wild-type mice. MRI of murine brains showed stronger and longer magnetic signals in the transgenic mice, which proved that the modified nanoparticles had passed through the BBB to bind with Aβ contents in the brain. “Furthermore, older Tg mice showed a stronger fluorescence signal than the younger mice, reflecting the higher amount of Aβ contents in the older mice,” noted the researchers. [Small 2018;14:e1800901]

Because of strong binding of the nanoprobe with Aβ oligomers and monomers, the NPs could effectively inhibit the Aβ aggregation process, as proven by a fluorescence assay. In addition, the neurotoxicity induced by various Aβ species, including Aβ42 oligomers and monomers, was well suppressed in the presence of the NPs. “Remarkably, the dual-modal nanoprobe also effectively inhibited Aβ aggregation and fibrillation, and demonstrated potent neuroprotection against Aβ-induced toxicity and reactive oxygen species generation, suggesting considerable therapeutic potential of this nanomaterial,” commented the researchers.

“Our findings suggest that F-SLOH surface-functionalized Gd3+-based NPs have great potential for early detection and routine screening of AD. It can also help monitor disease progression and assess the efficacy of potential drug candidates," said Professor Hung-Wing Li of the Department of Chemistry at HKBU.