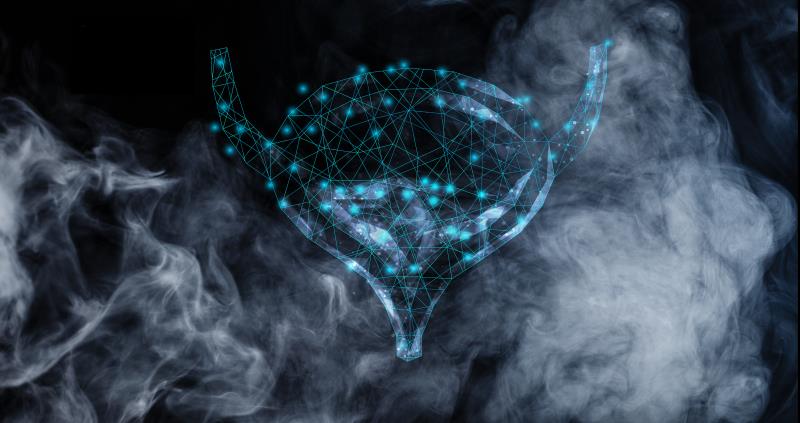 High levels of cotinine in the urine of smokers who have undergone resection for non-muscle invasive bladder cancer (NMIBC) could be a sign of cancer recurrence, according to a study from Lebanon presented at EAU21.

Researchers of this cross-sectional study enrolled 135 smokers aged 36–78 years (mean age 64 years, 100 percent Caucasian) with a diagnosis of NMIBC who were treated with resection only (no chemotherapy or radiation therapy) and who presented for follow-up cystoscopy between January 2018 and June 2019. Patients were smokers for a median 30.3 years. Patients with conditions that could potentially distort the results (eg, urinary tract infections) were excluded.

Smoking levels were determined by cotinine levels (<550 ng/mL [moderate smoking] or >550 ng/mL [heavy smoking]) from urine samples before cystoscopy. Forty-one and 59 percent of patients were moderate and heavy smokers, respectively (n=55 and 80, respectively).

An elevated cotinine level in the urine (>550 ng/mL) was associated with an increased risk of bladder cancer recurrence (relative risk, 4.16; p=0.025).

“Smoking is a leading risk factor for bladder cancer,” said the authors. “[However,] little is known whether [the] recurrence rate of bladder cancer is related to nicotine metabolites eliminated in [the] urine.”

Of all the nicotine metabolites, cotinine is considered the best marker of tobacco exposure, they continued.

“[This study showed that] high urinary cotinine levels (>550 ng/mL) convey a fourfold risk for the recurrence of NMIBC in smokers,” said the authors. They noted that some patients who identified as non-smokers or moderate smokers had urine cotinine levels consistent with heavy smoking.

“One of the major advantages of using cotinine is that it can be detected using a simple urine test, which is a cheaper and less invasive alternative to cystoscopy,” said co-lead author Dr Maher Abdessater from the Notre Dame des Secours University Hospital in Byblos, Lebanon.

“It can also pick up where patients are not accurately reporting their smoking levels, or where passive smoking combined with active smoking is pushing them into the heavy smoker category,” he said.

“Although our sample size is small, the results to date show that cotinine could be a potential biomarker for recurrence of bladder cancer and is worth further investigation,” said Abdessater, who mentioned that the study is ongoing.

“Additional prospective studies are needed to better understand the relation between urinary cotinine levels and bladder cancer, and its usefulness in NMIBC surveillance,” concluded Abdessater and co-authors.

According to EAU Adjunct Secretary-General Professor Arnulf Stenzl from the University of Tübingen Medical Center, Tübingen, Germany, who was not involved in the study, the findings need to be explored in a larger trial and with more specific indicators of smoking.

“We now need to … look at more precise indications of smoking levels and the type of cigarettes involved – particularly whether they are filtered or not. It would be interesting as well to look at whether cotinine levels are higher in patients with other risk factors for bladder cancer, such as exposure to arsenic or industrial benzole,” he suggested.