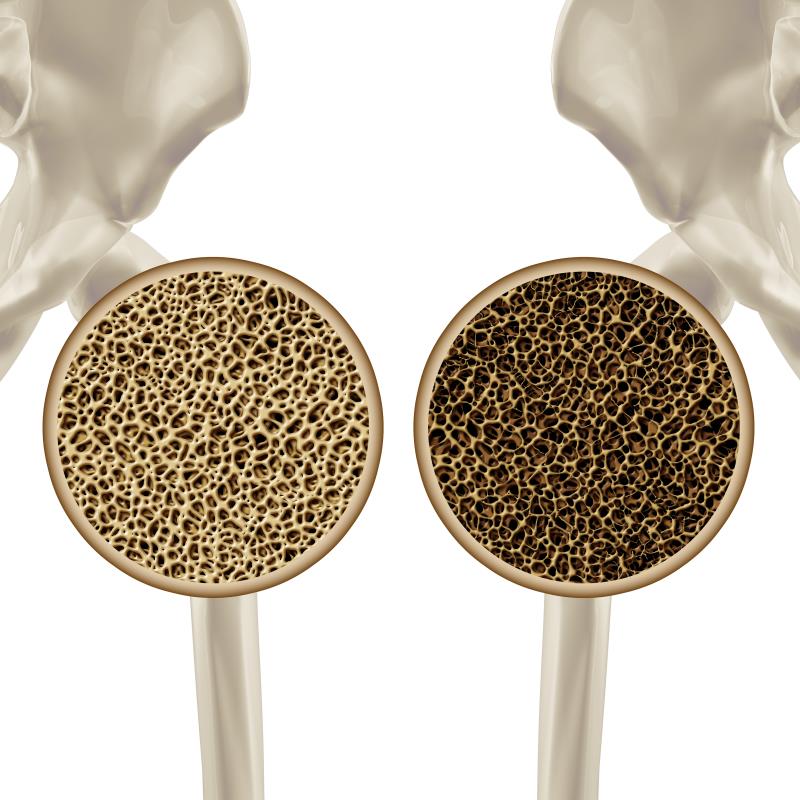 Combining high-dose teriparatide with denosumab may improve areal bone mineral density (aBMD) in postmenopausal women with osteoporosis, according to results of the phase IV DATA-HD* study.

“[W]e showed that combined treatment with teriparatide 40 μg and denosumab increases BMD at the hip and spine to a greater extent than a similar regimen with 20 μg teriparatide and denosumab,” said the researchers.

Seventy-six women with osteoporosis and high risk of fracture who were postmenopausal for ≥36 months were enrolled at the Massachusetts General Hospital, Boston, Massachusetts, US. They were randomized to receive daily subcutaneous teriparatide at 20 μg (standard dose; n=39) or 40 μg (high dose; n=37) for 9 months. At 3 months, all women initiated subcutaneous denosumab (60 mg) therapy every 6 months for 12 months. Sixty-nine women were included in the analysis (35 and 34 in the standard- and high-dose groups, respectively).

Although comparisons with other studies should be treated with caution, the increases in this study were higher than that achieved with other monotherapy or combination therapies, the researchers said.

“By contrast with many other chronic, age-related diseases, osteoporosis remains a disease primarily treated with monotherapy,” said the researchers.

They acknowledged that the results may be limited by the small, predominantly Caucasian study population, and single-centre design and called for studies assessing the fracture-reducing effects of the combination.

According to Dr Sundeep Khosla from the Mayo Clinic College of Medicine, Rochester, Minnesota, US, the likelihood of using the high-dose teriparatide-denosumab combination is low due to the need for off-label prescribing. However, it presents a crucial therapeutic option for certain patients such as those with high fracture risk. [Lancet Diabetes Endocrinol 2019;doi;10.1016/S2213-8587(19)30266-9]