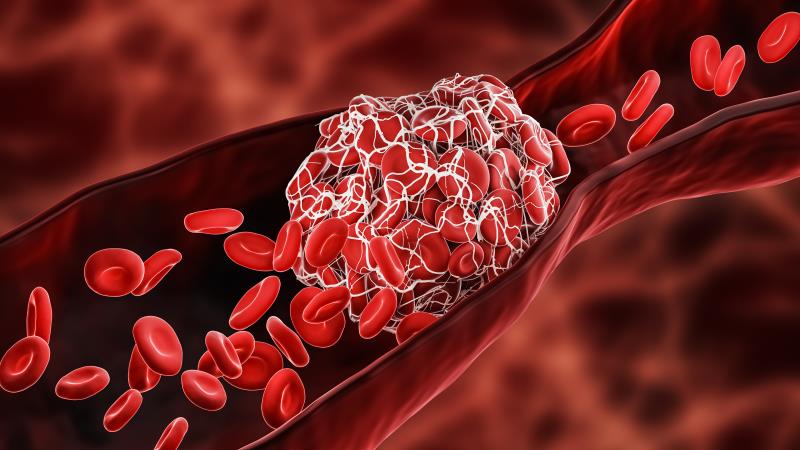 Giving the factor XI inhibitor abelacimab postoperatively was at least similarly effective as, or even superior to, the standard care of enoxaparin in preventing venous thromboembolism (VTE) following total knee arthroplasty, without increasing bleeding risk, according to the ANT-005 TKA trial presented at ISTH 2021.

Although the factor Xa inhibitor enoxaparin is reasonably effective and often used postoperatively to reduce the risk of VTE, it is associated with bleeding risk — calling for a search for safer anticoagulants.

Abelacimab is a monoclonal antibody that targets the factor XI, which is a key component of the intrinsic pathway of coagulation. “When administered intravenously, abelacimab rapidly binds to factor XI and prevents its activation by locking it in the inactive precursor conformation — [thereby] lowering the functional factor XI level,” explained the researchers.

At higher doses of 75 mg 150 mg, not only was abelacimab noninferior, it also met the criterion of superiority over enoxaparin for the prevention of VTE (event rates, 5 percent and 4 percent vs 22 percent; p<0.001 for superiority).

“The lower incidences of thrombosis and the less extensive thrombosis observed with the higher doses of abelacimab than with enoxaparin highlight the role of factor XI in the pathogenesis of venous thrombosis after surgery,” said the researchers. “Therefore, factor XI is an attractive target for thromboprophylaxis.”

The rates of any bleeding events were low, occurring at 2 percent in each of the 30- and 75-mg abelacimab groups and none in the 150-mg group, compared with none in the enoxaparin group. Specifically, the rates of major or clinically relevant nonmajor bleeding were similarly low rates in all treatment groups.

“[In addition,] the frequency of blood transfusions and postoperative haemoglobin levels with abelacimab were similar to those with enoxaparin,” the researchers reported.

Consistent with previous studies on factor XI antisense oligonucleotide which also demonstrated superiority to enoxaparin in preventing VTE, these findings taken together support the notion that factor XI is important in the formation of postoperative VTE.

However, unlike the antisense oligonucleotide which needs to be administered 4 weeks before surgery to take effect, intravenous infusion of abelacimab acts within minutes — thus enabling postoperative dosing, the researchers explained.

As the study sample size was relatively modest, the researchers suggested that further studies be conducted “to determine whether anticoagulant strategies targeting factor XI can dissociate thrombosis from haemostasis.”