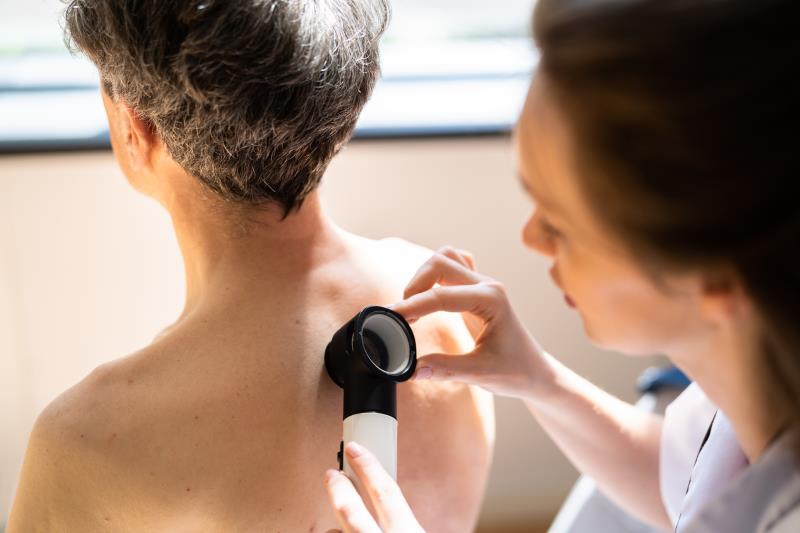 A compact device that incorporates high-resolution millimetre-wave imaging (HR-MMWI) can diagnose malignant skin lesions as accurately as clinical examination and other detection techniques, potentially cutting the number of unnecessary biopsies in half, as reported in a study.

“We showed that real-time HR-MMWI could distinguish skin cancer and precancer lesions from benign tissues with an area under the receiver operating characteristic curve (AUC) of 0.996, and sensitivity and specificity of 97 percent and 98 percent, respectively,” according to researchers led by Negar Tavassolian, director of the Bio-Electromagnetics Laboratory at Stevens Institute of Technology in Hoboken, New Jersey, US.

In the current study, the team created a compact MMWI device, which operated with an ultra-wide bandwidth of approximately 100 GHz. To suppress noise and interference, the researchers devised an algorithm to fuse signals captured by multiple antennas, yielding high-resolution images of even a miniscule mole or blemish.

“Overall, the results of this work support the use of HR-MMWI in assisting skin cancer detection at the clinical interest level (ie, cancer/precancer versus benign)… [The device] is an affordable technique and requires less extensive training and user expertise,” Tavassolian said, adding that the classification of a given lesion can be performed in approximately less than 20 seconds.

Considering the device’s specificity rates for differentiating between benign and cancer tissues in this study, Tavassolian and colleagues believe that the device will help lower the number of unnecessary biopsies by >50 percent, saving time and effort for dermatologists.

“It will also reduce patient discomfort and provide significant cost reductions for both the individual patient and the nation’s healthcare system,” they added.

Next step in the research

Multiple noninvasive imaging techniques (ie, reflectance confocal microscopy, optical coherence tomography, multispectral digital skin lesion analysis, and electrical impedance spectroscopy) have been developed for diagnosing skin cancers and differentiating them from benign lesions. Their clinical utility, according to Tavassolian, is however limited as each provides information only under certain conditions.

Meanwhile, other advanced imaging technologies that can detect skin cancers are big and expensive, which bar their access in the clinic, she added.

“We’re creating a low-cost device that’s as small and as easy to use as a cellphone, so we can bring advanced diagnostics within reach for everyone,” Tavassolian said.

Tavassolian and colleagues noted that the algorithm that powers their device can be further improved to allow mapping of lesion margins, which will enable more precise and less invasive biopsying for malignant lesions.

Already, the researchers are looking into commercializing their technology and producing functional handheld millimetre-wave diagnostic devices to for as little as USD 100 each—a cost that is significantly lower than that of existing hospital-grade diagnostic equipment.

“The path forward is clear, and we know what we need to do,” said Tavassolian. “After this proof of concept, we need to miniaturize our technology, bring the price down, and bring it to the market.”