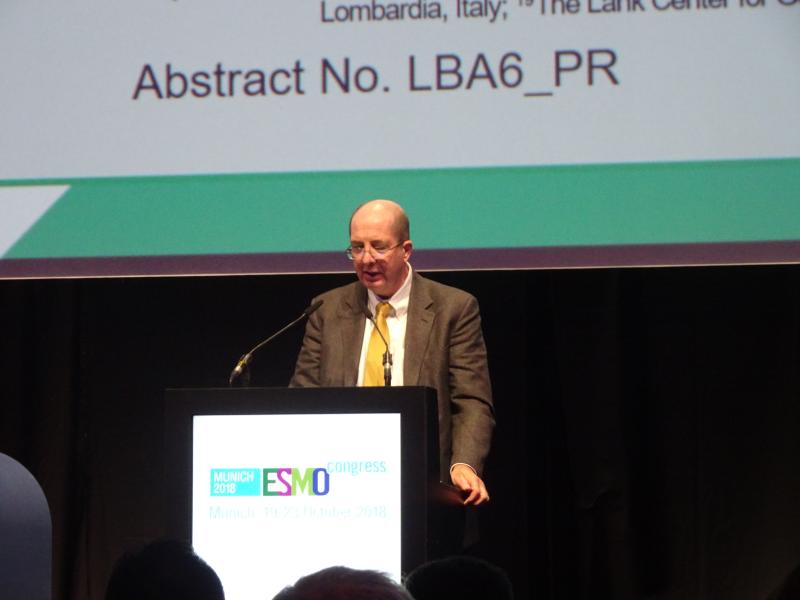 The rationale behind the combination therapy capitalizes on the immunomodulatory effects of axitinib, in addition to its antiangiogenic effects through VEGFR blockade, explained Motzer. It was believed that simultaneous inhibition of PD-L1 by adding immunotherapy on top of VEGFR blockade is likely to have synergistic antitumour effects, based on preclinical findings.

The global phase III trial randomized 886 treatment-naïve patients with clear-cell advanced RCC (63 percent with PD-L1+) with ECOG performance status of 0 or 1 in a 1:1 ratio to receive intravenous avelumab 10 mg/kg Q2W plus oral axitinib 5 mg in a 6-week cycle or oral sunitinib 50 mg QD on a 4- weeks-on/2-weeks-off schedule. [ESMO 2018, abstract LBA6_PR]

Furthermore, the objective response rate was more than doubled with avelumab + axitinib vs sunitinib in the PD-L1+ subgroup (55 percent vs 26 percent; p<0.0001), with similar results in the overall population (51 percent vs 26 percent; p<0.0001). This was mainly driven by the greater partial response rates in the combination therapy arm, while the sunitinib arm was more likely to have progressive or stable disease.

“The findings support the potential of avelumab plus axitinib as a new treatment approach for patients with advanced RCC,” said Motzer.

The overall survival (OS) data were immature to date, but as of data cut-off after a median follow-up of about 12 months (11.5 months for the sunitinib arm), the HR for death was 0.78 in favour of combination therapy in an interim OS analysis, although statistical significance was not reached (p=0.068).

According to Motzer, avelumab + axitinib demonstrated a favourable safety profile, with similar rates of grade 3/4 treatment-related adverse events (TRAEs) as the sunitinib arm (55 percent for both). Nonetheless, TRAEs leading to discontinuation of all study drugs were reported in 8 percent of patients in the combination therapy arm compared with 4 percent in the sunitinib arm. Among patients receiving combination treatment, 38 percent experienced immune-related adverse events of any grade and 9 percent had grade 3/4 events, with hypothyroidism being the most common.

Noting that PFS and objective response were better with the combination therapy in both the PD-L1+ subgroup and overall population, invited discussant Professor Viktor Grunwald from the West-German Cancer Center in Essen, Germany, suggested that PD-L1+ might not be an optimal marker to identify patients who were most likely to benefit.

He also asked whether combination therapy is really better than sequential therapy, adding that “without [data on] OS benefit or HR-QoL improvement, it is uncertain whether the combo is ready for prime time.”

“Ipilimumab-nivolumab delivers clinical relevant OS benefit in intermediate-/high-risk patients and should remain the standard of care,” Grunwald believed. “[Nonetheless,] there is a niche in favourable risk patients, where axitinib + avelumab could be a new standard of care.”