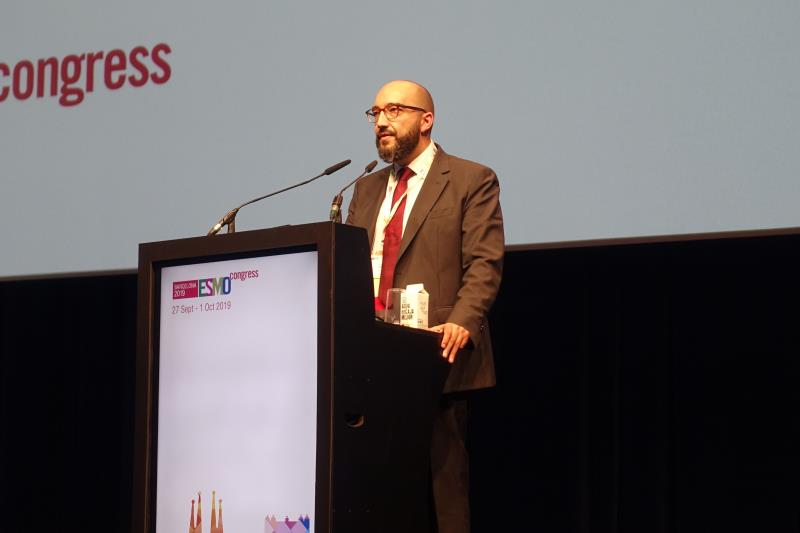 “IMvigor130 is the first [trial] to combine an immunotherapy and chemotherapy so far in the field of urothelial cancer and the largest reported positive trial in this field,” said Dr Enrique Grande from MD Anderson Cancer Center in Madrid, Spain.

The phase III IMvigor130 study included both patients who were eligible and ineligible for cisplatin. Participants were 1,213 previously untreated patients with locally advanced or mUC who were randomized 1:1:1 to receive atezolizumab + platinum-based chemotherapy** (arm A), atezolizumab alone (arm B), or placebo + platinum-based chemotherapy (arm C). [ESMO 2019, abstract LBA14]

In particular, patient subgroups with PD-L1 overexpression (IC2/3; HR, 0.68) or who were receiving cisplatin-based chemotherapy (HR, 0.73) appeared to derive a greater benefit from the addition of atezolizumab, reported Grande, who cautioned though, that this was an exploratory subgroup analysis.

Nonetheless, Grande pointed out that the OS results have yet to mature and follow-up will continue to final analysis. “This is a new option for the upfront treatment of patients with mUC. Longer follow-up is needed on OS and we will continue to search for biomarkers to identify which patients respond best to this therapy,” he said.

Among patients with PD-L1 status IC2/3, there was a similar trend towards a greater OS benefit with atezolizumab monotherapy (arm B) vs chemotherapy alone (arm C; median OS, not estimable vs 17.8 months; HR, 0.68) compared with the intention-to-treat population (HR, 0.83), although the difference was not formally tested due to statistical testing hierarchy.

The toxicity profile of the combination therapy was consistent with that of the individual drugs. The rates of adverse events (AEs) leading to discontinuation were similar at 34 percent in both chemotherapy-containing arms A and C. Immune-related AEs reported included skin rash, liver enzyme elevation, and thyroid hormone alteration.

During the discussion session, invited discussant Professor Thomas Powles of Barts Cancer Centre, London, UK looked at the findings in context of how they change practice.

How meaningful is the significant improvement in PFS, he asked, given an OS data that is trending the right direction but not yet statistically significant.

“PFS in the combination arm is statistically significant [compared with chemotherapy alone], but not yet clinically transformative without OS, in my opinion,” Powles said. “We probably need to wait for OS data for this to be practice changing.”

Noting that the PFS and OS benefit appeared greater in the patient subgroup positive for PD-L1, Powles’ take on patient selection was: this finding strengthens the case for using atezolizumab in PD-L1-positive patients who are ineligible for platinum-based chemotherapy (but probably not in the cisplatin-eligible patients yet until an analysis on the subgroup is available).

This finding in the first-line setting is in contrast to the previous IMvigor211 trial which did not find a significant OS benefit with atezolizumab monotherapy vs chemotherapy in the second-line setting in patients overexpressing PD-L1 (IC2/3). [Lancet 2018;391:748-757]

“So, the hypothesis that earlier treatment works [better] is sound, and this is exciting for the future of the disease,” said Powles.