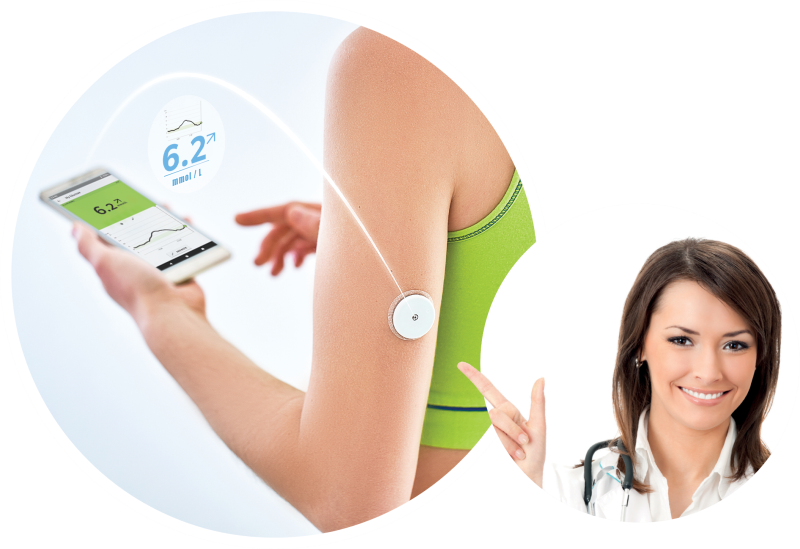 This makes blood glucose testing – and keeping glucose levels under control – important for GPs who are on the frontline of diabetes management.

The FreeStyle Libre system allows continuous glucose monitoring (CGM) without routine finger pricks, making glucose checks painless and comfortable for patients. Glucose readings are obtained through a sensor worn on the back of the upper arm that is scanned through a smartphone or a handheld reader.

HbA1c provides a reliable measure of chronic hyperglycaemia and correlates well with the risk of long-term diabetes complications. [Biomark Insights 2016;11:95-104] Elevated HbA1c levels have been tied to higher risk of complications, including cardiovascular disease and mortality. [N Engl J Med 2010;362:800-811] Hence, keeping HBA1c in normal range is an integral aspect of diabetes management.

“The FreeStyle Libre system can deliver substantial reduction in HbA1c regardless of whether [patients with T2D] are using insulin or not,” said study investigator Dr Eden Miller from High Lakes Health Care, Sisters, Oregon, US.

Real-world data from the FLARE-NL** study also showed that the use of FreeStyle Libre for 1 year improved well-being and reduced disease burden, on top of good glycaemic control, in patients with  T1D (77.2 percent), T2D (16.3 percent), or other diabetes types (6.5 percent) who were treated with insulin. HbA1c decreased from an estimated mean 64.1 to 60.1 mmol/mol (p<0.001), with an even greater reduction in patients with baseline HbA1c >70 mmol/mol (difference, -8.6 mmol/mol), regardless of diabetes types. Fewer patients also experienced hypoglycaemia, hospitalization for diabetes, and absence from work. [BMJ Open Diab Res Care 2019;7:e000809]

“[P]atients will test more often when they have an easier and more convenient way to do so  utilizing a device like FreeStyle Libre, leading them to ultimately being healthier, which is our goal for our patients,” said chief investigator Professor Jan Bolinder from Karolinska Institutet, Stockholm, Sweden. [https://abbott.mediaroom.com/2016-06-13-Abbott-Announces-Positive-Results-from-Groundbreaking-Study-of-FreeStyle-Libre-System-for-People-with-Type-1-Diabetes, accessed 22 September 2020]

Similarly, the use of FreeStyle Libre as a replacement for blood glucose monitoring in insulin-treated T2D led to a persistent 50 percent reduction in time spent in hypoglycaemia compared with baseline at 12 months. [Diabetes Ther 2017;8:573-586]

Reduced time in hypoglycaemia with FreeStyle Libre was also observed in the LIBERATES study of 141 patients with T2D and acute coronary syndrome (ACS). Device users were in range (3.9–10.0 mmol/L) for an additional 17 minutes per 24 hours compared with SMBG users on days 76–90. [EASD*** 2020, S11]

Time in range (TIR) was also better with FreeStyle Libre at days 16–30, primarily among patients on insulin at baseline, as was hypoglycaemic exposure (<3.9 mmol/L) which became more pronounced at days 76–90. Both groups experienced a 7.0 mmol/mol reduction in HbA1c from baseline, though there was no between-group difference at day 90.

Prevention of diabetic ketoacidosis (DKA) has traditionally relied on intensive SMBG, according to Professor Ronan Roussel from Hôpital Bichat and Université de Paris, Paris, France, lead author of the retrospective RELIEF study. However, this approach may not be completely effective.

In the RELIEF study of patients with T1D  (n=33,203) or T2D (n=40,955) on insulin therapy, the use of FreeStyle Libre almost halved DKA-related hospitalization rates, with a 52 and 47 percent reduction in annual rates (excluding coma) in the 1 year post- vs 1 year pre-FreeStyle Libre use in patients with T1D and T2D, respectively. [ADA 2020, abstract 68-OR]

The reductions were noted irrespective of levels of SMBG use the year prior to using FreeStyle Libre, or type of insulin used (continuous subcutaneous insulin infusion or multiple daily insulin injections).

FreeStyle Libre use may have enabled the detection and management of persistent hyperglycaemia and subsequent prevention of DKA. Patients may have also improved their self-care after device initiation, said Roussel.

ADEs: Before and after

In a retrospective French study, acute diabetes events (ADEs) were reduced with FreeStyle Libre use compared with 1 year prior in patients with T1D (3.3 percent vs 6.4 percent) and T2D (1.6 percent vs 2.7 percent; p<0.0001 for both). This benefit was primarily driven by fewer DKA-related hospitalizations. Diabetes-related coma and hospitalization for hypoglycaemia were also significantly reduced (p<0.0001). [EASD 2020, abstract 705]

Other studies showed lower ADEs after FreeStyle Libre initiation regardless of insulin treatment. For example, in patients with T2D not on bolus insulin, there was a 30 percent reduction in ADEs after 6 months of FreeStyle Libre use (HR, 0.70; p<0.001). All-cause hospitalizations were also reduced (HR, 0.87; p=0.025). [ADA 2020, abstract 85-LB]