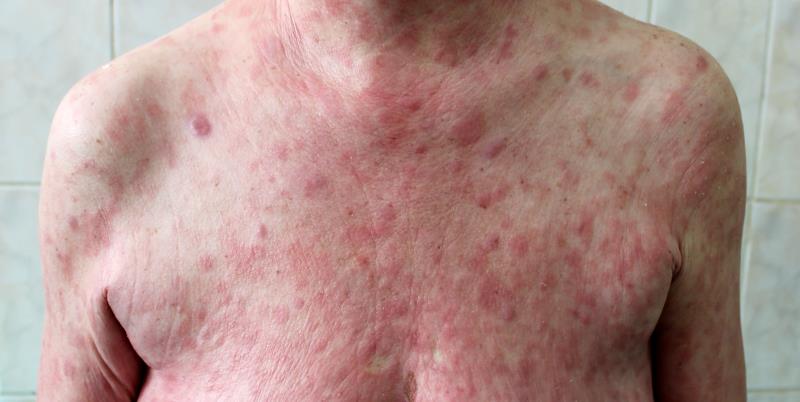 “Importantly, treatment benefit [with hypericin] was similar in patch and plaque lesions, suggesting enhanced depth of penetration with visible light spectrum wavelengths, which would be an advantage over some current MF/CTCL skin-directed therapies,” the researchers said.

FLASH randomized 169 early-stage MF/CTCL patients (mean age 58.4 years, 57.8 percent men, 72.3 percent White) to receive hypericin PDT (n=116) or placebo (n=50) in cycle 1. Each index lesion was coated with the ointment, then covered with opaque dressing or clothing for 18 to 24 hours, followed by administration of visible light (range, 500 to 650 nm). In cycle 2, all patients received the active drug to the index lesions for 6 weeks. Cycle 3 treatment was optional, but in any case, the active drug was administered in both index and additional lesions for 6 weeks.

“Hypericin PDT has a similar treatment schedule to traditional UV phototherapy but is more targeted to skin surface area and requires a light panel in the 500–650 nm spectrum that is potentially safer in patients with severe actinic skin damage and skin cancer history. Because hypericin PDT requires occlusion 12–24 hours after hypericin application, its use may be limited in certain anatomic sites (face), although site application limitations exist for all other current MF/CTCL skin-directed therapies (eg, topical chemotherapy not used in body folds or the central face),” according to the researchers.

“Hypericin PDT is also potentially suited for administration with an at-home light unit and could be a valuable user-friendly option to improve access to treatment for patients who live far from a healthcare centre and/or prefer the shift away from in-office treatments that occurred during the COVID-19 pandemic,” they added.

The study was limited by the inability to assess clinical response with respect to skin pigmentation (Fitzpatrick scale), as well as clinical or histologic subtypes of MF/CTCL (eg, folliculotropic). The researchers pointed out that the next step in the study is to evaluate clinical response and AEs with continuous hypericin PDT treatment without the 2-week rest periods and for longer durations to reflect real-world practice.