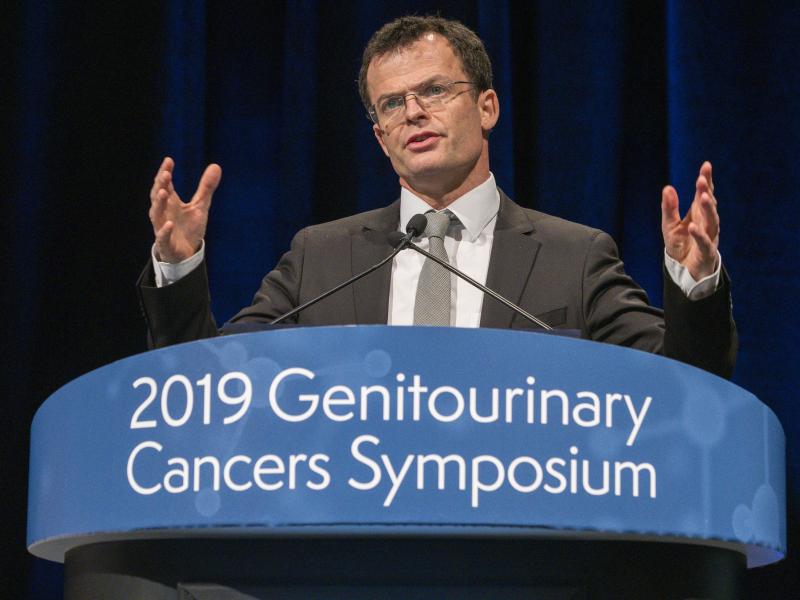 The combination of pembrolizumab and axitinib in the first-line setting yielded superior survival outcomes compared with sunitinib in patients with advanced renal cell carcinoma (RCC), according to results of the phase III KEYNOTE-426* trial.

“The significant [overall survival (OS)] advantage is particularly notable because it has not been achieved with first-line treatment of RCC with the use of anti-VEGF-based therapy administered alone or in combination,” said the authors.

“Pembrolizumab plus axitinib should be a new standard of care for first-line treatment of patients with advanced clear-cell RCC,” said study author Professor Thomas Powles from the Barts Cancer Institute and Queen Mary University of London, London, UK, who presented the findings at ASCO GU 2019.

Of the 176 and 242 patients on pembrolizumab-axitinib and sunitinib, respectively, who discontinued treatment, 50 and 60.7 percent, respectively received subsequent therapy, with a majority receiving a VEGF or VEGF receptor inhibitor in the pembrolizumab-axitinib group (44.3 percent) and a PD-1 or PD-L1 inhibitor in the sunitinib group (37.6 percent).

“The benefits of pembrolizumab plus axitinib with respect to OS and PFS were observed in all subgroups examined, including all IMDC** risk and PD-L1 expression categories,” said the authors.

The most common grade 3–5 AEs of interest among pembrolizumab-axitinib recipients were hepatitis (2.3 percent) and colitis (1.9 percent), and among sunitinib recipients, severe skin reactions (0.7 percent).

The future of RCC treatment?

“The results really were quite astounding,” said study co-author Professor Brian Rini from the Cleveland Clinic, Cleveland, Ohio, US. “The robust activity from the phase I [trial] held up and it translated into a very impressive survival advantage. It’s the first time in kidney cancer ever in a front-line setting that all three of those endpoints [OS, PFS, and ORR] have been met,” he said. [https://ecancer.org/conference/1127-2019-genitourinary-cancers-symposium.php]

“[The pembrolizumab-axitinib combination] is going to … assume a large part of the standard of care. Broadly speaking, kidney cancer patients … are all going to get an [immune-oncology]-based combo. The days of giving TKI monotherapy … are pretty much over,” he said.