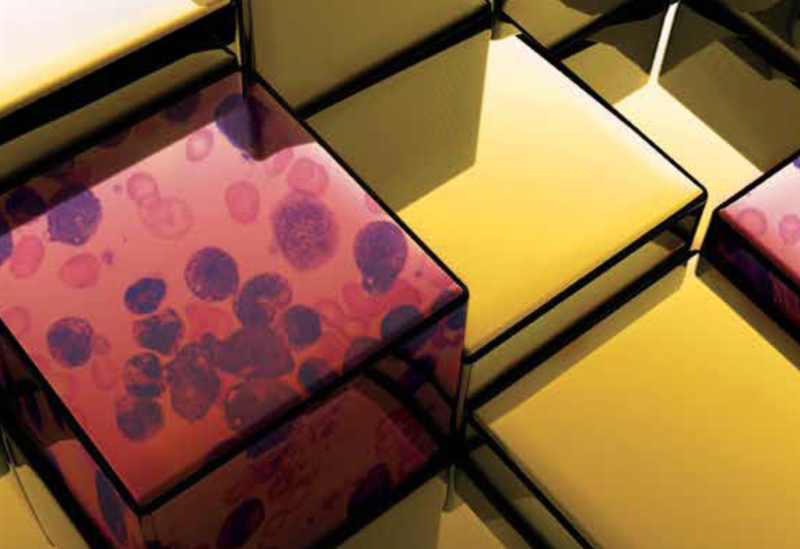 The trial included 233 adult patients (median age, 52 years; female, 51.5 percent) with CML in chronic phase previously treated with ≥2 TKIs who experienced treatment failure with or were intolerant of the most recent TKI. Patients intolerant of the most recent TKI were eligible if they had BCR-ABL1IS >0.1 percent at screening. Those with known bosutinib-resistant T315I or V299L mutations were excluded. [Hochhaus A, et al, ASH 2020, abstract LBA-4]

Patients in the study were followed up for a median of 14.9 months. Results showed a significant improvement in the primary endpoint of major molecular response (MMR) rate at 24 weeks among patients randomized to receive asciminib 40 mg BID (n=157) vs those who received bosutinib 500 mg QD (n=76).

“MMR rate at 24 weeks was 25.5 percent in the asciminib group vs 13.2 percent in the bosutinib group,” reported investigator Dr Andreas Hochhaus of the University Hospital, Jena, Germany. “The common treatment difference after adjustment for major cytogenetic response [MCyR] status at baseline was 12.2 percent [95 percent confidence interval (CI), 2.19 to 22.3; 2-sided p=0.029].”

“The between-group difference in MMR started to become evident at week 12,” he added.

Among patients who achieved MMR, median time to MMR was 12.7 weeks with asciminib vs 14.3 weeks with bosutinib.

“A consistent treatment effect of asciminib on MMR at 24 weeks was observed across subgroups evaluated,” said Hochhaus.

The treatment effect of asciminib vs bosutinib was similar after adjustment for baseline MCyR (odds ratio [OR], 2.35; 95 percent CI, 1.08 to 5.12), as well as for MCyR and other important covariates at baseline (OR, 2.38; 95 percent CI, 1.06 to 5.35). According to Hochhaus, this indicated that the treatment effect of asciminib remained significant after accounting for imbalances between treatment groups at baseline, including the proportion of patients who had received ≥3 prior lines of therapy (47.8 percent in the asciminib group vs 60.5 percent in the bosutinib group), and those who discontinued the last TKI due to lack of efficacy (60.5 percent vs 71.1 percent) or intolerability (37.6 percent vs 28.9 percent).

Complete cytogenetic response (CCyR), a key secondary endpoint, was achieved by 40.8 percent of patients in the asciminib group vs 24.2 percent of those in the bosutinib group at 24 weeks, with a common treatment difference of 17.3 percent (95 percent CI, 3.62 to 31.0) after adjustment for MCyR status at baseline.

The median duration of exposure was 43.4 weeks for asciminib and 29.2 weeks for bosutinib. At data cut-off, treatment was ongoing in 61.8 percent vs 30.3 percent of patients in the asciminib vs bosutinib group. The most common reasons for treatment discontinuation were lack of efficacy (21 percent vs 31.6 percent) and adverse events (AEs; 5.1 percent vs 21.1 percent). Among patients who discontinued bosutinib due to lack of efficacy, 28.9 percent switched to receive asciminib.

“ASCEMBL is the first controlled study comparing treatments for resistant/intolerant patients with CML. Results showed statistically significant and clinically meaningful superior efficacy as well as a favourable safety profile of asciminib, a first-in-class STAMP inhibitor, vs bosutinib. These results support the use of asciminib as a new treatment option in CML, particularly in patients with resistance or intolerance to ≥2 TKIs,” he concluded. “BCR-ABL1 mutations remain the key driver of CML even in patients treated in the third line or beyond.”