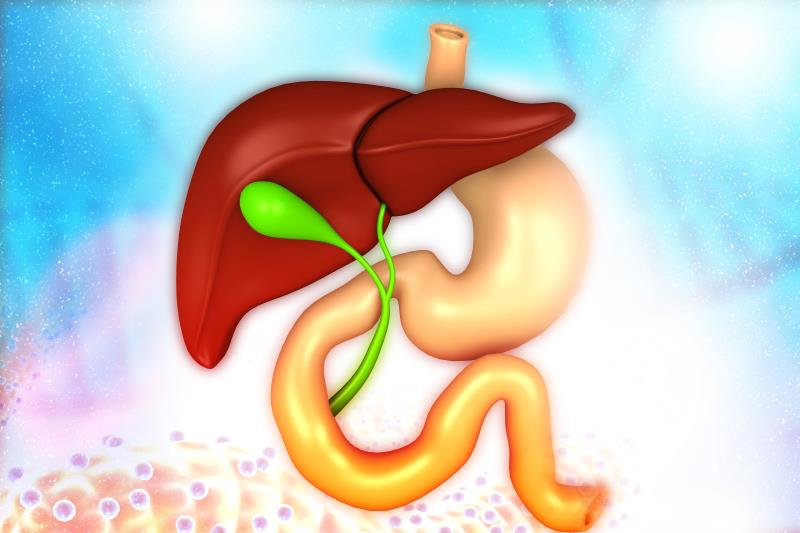 In the final analysis of the phase III ClarIDHy trial, ivosidenib was well-tolerated and had a favourable overall survival (OS) benefit despite a high crossover rate from placebo among individuals with previously treated advanced cholangiocarcinoma and an isocitrate dehydrogenase 1 mutation (mIDH1 CCA).

IDH1 mutations occur in about 20 percent of intrahepatic CCAs, which trigger the production of D-2-hydroxyglutarate which, in turn, promotes oncogenesis. [J Gastrointest Onco 2019;10:751-765] Although mIDH1 is not associated with prognosis, CCA has limited effective treatment alternatives, noted Dr Andrew Zhu from Massachusetts General Hospital, Boston, Massachusetts, US, who presented the findings at ASCO GI 2021.

When the RPSFT* method was used to adjust for the crossover rate, there was a statistically significant separation of the survival curves, with an adjusted median OS of 5.1 months for placebo (HR, 0.49; pone-sided<0.0001). “This represents about 5 months of benefit in median OS for ivosidenib,” explained Zhu.

“[Collectively, the efficacy findings suggest that] despite a high rate of crossover … ivosidenib was associated with a numerical improvement in OS, which is further supported by the RPSFT adjustment for crossover,” Zhu continued.

Despite the higher dose reduction (3 percent vs 0 percent) and interruption rates (30 percent vs 19 percent) with ivosidenib vs placebo due to TEAEs, discontinuation rate was similar between arms (7 percent vs 8 percent) and no treatment-related deaths were reported. “The safety profile was tolerable overall and consistent with previously published data,” said Zhu.

On the first day of cycle 2, compared with those on placebo, ivosidenib recipients experienced significantly less declines in EORTC QLQ-C30** Physical Functioning (ptwo-sided=0.002) and Pain subscales (ptwo-sided=0.039) relative to baseline. “For the additional subscales in which significant differences were observed, the results favoured ivosidenib,” added Zhu.

“Over 90 percent of patients had metastatic disease, highlighting the advanced setting of this population … Along with the tolerable safety profile and supportive quality of life data, the final efficacy results demonstrate the clinical benefit of ivosidenib in this patient population, for which there is an urgent/unmet need for new therapies,” Zhu concluded.

As noted in the initial ClarIDHy report, the mature OS data currently presented may augment the previous findings to support the application for the regulatory approval of ivosidenib.