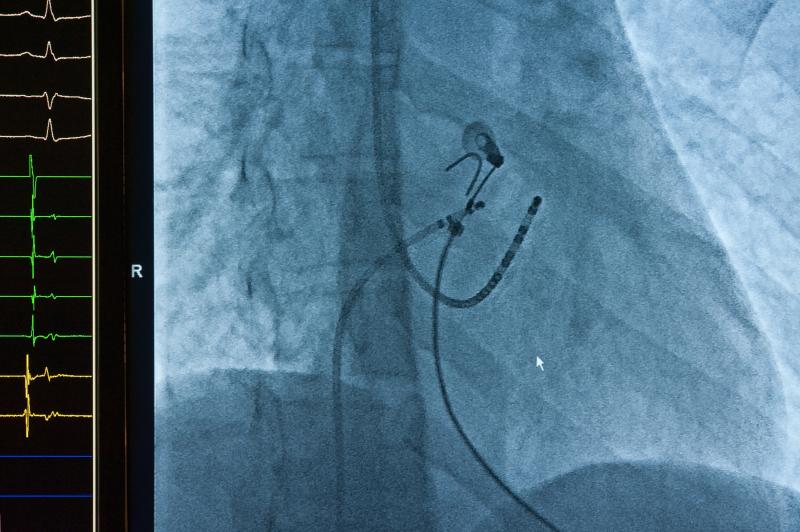 The use of uninterrupted dabigatran before, during, and after catheter ablation in patients with atrial fibrillation (AF) resulted in fewer major bleeding complications than uninterrupted warfarin, according to results of the RE-CIRCUIT* trial.

“The results of the RE-CIRCUIT study demonstrate that performance of AF ablation on uninterrupted dabigatran is a better anticoagulation strategy as compared with performance of AF ablation on uninterrupted warfarin,” said lead author Professor Hugh Calkins from Johns Hopkins Hospital, Baltimore, Maryland, US, who presented the findings at the American College of Cardiology (ACC) 66th Scientific Session in Washington DC, US.

In this open-label, multicentre (104 sites in 11 countries), controlled trial, 704 patients scheduled to undergo catheter ablation for paroxysmal or persistent AF were randomized to receive either dabigatran (150 mg twice daily) or warfarin (target international normalized ratio, 2.0–3.0). Of these, 635 (mean age, 59 years) were included in the final analysis (317 and 318 on dabigatran and warfarin, respectively). Anticoagulation was initiated 4–8 weeks prior to ablation and was continued during and up to 8 weeks postprocedure.

The incidence of minor bleeding events was comparable between groups (18.6 percent [n=59] vs 17.0 percent [n=54] in the dabigatran and warfarin groups, respectively), while there was no incidence of stroke or systolic embolism among the participants, and just one incident of a transient ischaemic attack in a patient on warfarin.

Severe adverse events occurred in 18.6 and 22.2 percent of patients in the dabigatran and warfarin groups, respectively, with no death occurring in either group.

“Thromboembolic and bleeding events ... are some of the most feared complications of AF ablation,” said Calkins.

High-risk patients on non-vitamin K antagonists (non-VKAs) are often put on VKAs before ablation to enable continuous anticoagulation during the procedure. They are then reverted to non-VKAs 1–2 months after ablation, said the researchers. “The practice of switching anticoagulants is cumbersome ... and the growing use of [non-VKAs] has made this approach impractical,” they said.

According to the researchers, the more specific mechanism of action and shorter half-life of dabigatran may be behind the lower numbers of major bleeding events. Normal levels of factor VII and a stable anticoagulation effect may also play a role, they said.