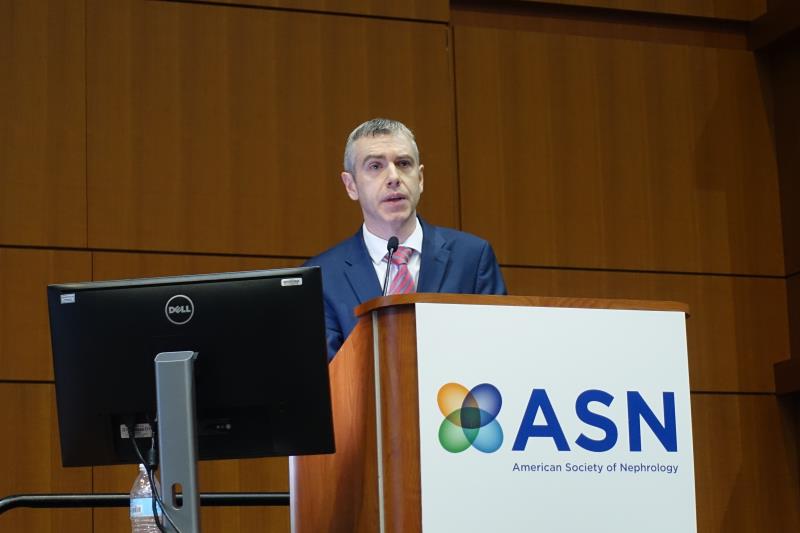 The combination of  sacubitril and valsartan results in fewer renal events and slows kidney disease progression vs valsartan alone in patients with heart failure (HF) and preserved ejection fraction (HFpEF) in the post-hoc analysis of 5,000 patients from the PARAGON-HF trial.

Sacubitril/valsartan, an angiotensin receptor-neprilysin inhibitor (ARNi), reduces natriuretic peptides, which may be of benefit to patients with HF, said study investigator Dr Finnian McCausland from the Brigham and Women’s Hospital in Boston, Massachussets, US.

“This finding was primarily driven by fewer occurrences of a sustained decline in eGFR of ≥50 percent,” McCausland said. “Sacubitril, in combination with valsartan, also attenuated the rate of decline in eGFR vs valsartan alone and this was consistent with the results of analyses from PARADIGM-HF in HFrEF. Overall, despite more episodes of hypotension, beneficial renal effects were seen for combined ARNi in HFpEF patients, and this was regardless of baseline eGFR.”

“In the renal space, we haven’t had much that has improved or stabilized renal function in these patients,” commented  Dr Mitchell Rosner from the University of Virginia in Charlottesville, Virginia, US who is unaffiliated with the study. “Having a drug that stabilizes and is potentially protective for kidney function over the long term is very important and exciting.”

Patients in the PARAGON-HF trial (n=4,796) received sacubitril with valsartan 103 mg, or valsartan 160 mg twice daily, on top of maintenance drugs and followed up for a median duration of 35 months. They were over 50 years of age, with at least 45 percent LVEF, New York Heart Association (NYHA) class II–IV HF, structural heart disease, or elevated N-terminal pro-brain natriuretic peptide (NTproBNP).

Those treated with valsartan alone experienced nearly twice the renal composite outcomes vs those  who received sacubitril/valsartan (64 vs 33), most commonly attributed to at least a 50 percent decline in eGFR (60 vs 27), followed by ESRD (12 vs 7). There was one death from renal causes in each group.

Adverse events were comparable between groups but more common in patients with lower baseline eGFRs. Hypertension was more common with sacubitril/valsartan whereas serum creatinine changes and hyperkalemia episodes were more common with valsartan.

“Heart failure with HFpEF accounts for half of HF cases, is rising in prevalence, and is associated with high rates of morbidity and mortality,” McCausland said. “Further work needs to be done to determine if the beneficial effect extends to patients  with lower eGFR,” he concluded.