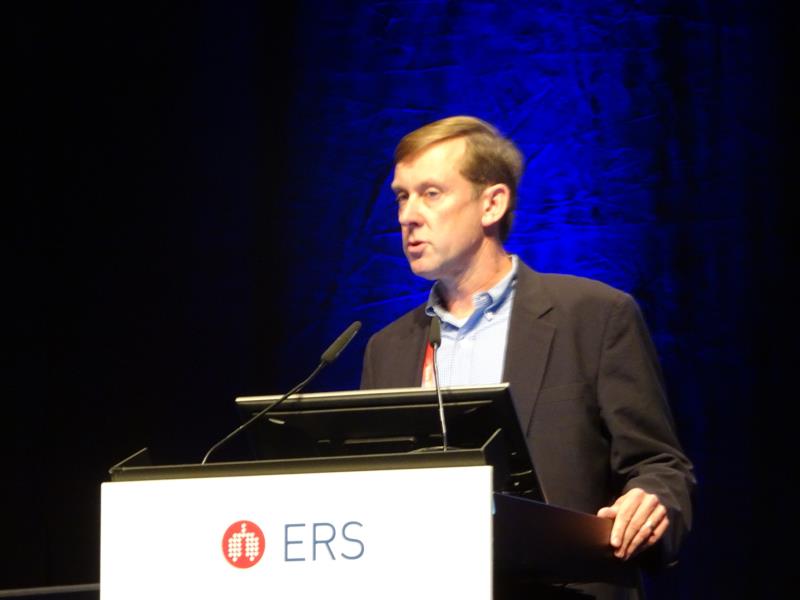 Use of the Zephyr endobronchial valve (EBV) led to significant improvements in a range of patient-reported outcomes (PROs) including multiple domains of respiratory symptoms and quality of life (QoL) in patients with severe emphysema, according to the post hoc results of the LIBERATE* trial presented at ERS 2019.

“[The improved] multidimensional measures of dyspnoea and QoL [with Zephyr EBV] … are highly consistent with the symptomatic benefits and physiologic improvements presented in the primary [analysis],” said study investigator Dr Mark Dransfield from the University of Alabama in Birmingham, Alabama, US.

To ascertain the impact of Zephyr EBV in 1-year respiratory symptoms and QoL, investigators evaluated 190 participants (mean age 63 years, 53 percent female) with heterogenous emphysema who were randomized 2:1 to receive either EBV or standard of care (SoC). [ERS 2019, RCT 447]

At 12 months, compared with SoC, nearly half of Zephyr EBV users had >15 percent improvement in FEV1** (17 percent vs 48 percent). The absolute difference in FEV1 was slightly more than the minimal clinically important difference (MCID) of 100 mL (p<0.001). The difference of about 40 meters for 6-minute-walk distance (6MWD) between the two arms exceeded the MCID of 25 (p=0.002), while the 7.5-point difference in St George’s Respiratory Questionnaire (SGRQ) score almost doubled the 4-point MCID (p=0.004). These absolute differences translate to clinically meaningful changes. [COPD 2005;2:111-124]

Bioresponder analysis revealed a significant improvement in mMRC with EBV vs SoC (~50 percent vs ~20 percent; p<0.001). A more pronounced difference was observed in the TDI focal score, with >60 percent of EBV users achieving the threshold as opposed to <20 percent of SoC recipients (p<0.001).

The Emphysema Symptom Intensity Score obtained from participants’ daily diaries revealed a sloping increase in the SoC arm, while the EBV arm had a downward trend (1 vs <-1) suggesting a reduction in the severity of symptoms with EBV.

Taken together, the current findings support the clinically meaningful benefits of the Zephyr EBV among patients with emphysema with little to no collateral ventilation in the treated lobe. [Am J Respir Crit Care Med 2018;198:1151-1164] Unlike surgery or other interventional measures, EBVs are readily removable in the event of complications or lack of patient response, thus making it a viable treatment option for this patient subgroup. [JAMA 2016;315:175-184; Lancet Respir Med 2016;4:185-193; Eur Respir J 2015;46:651-­662]

“[Moreover,] Zephyr EBVs do not seem to impact cough and sputum production characteristic of chronic bronchitis, reinforcing their role as treatment for emphysema,” said Dransfield.