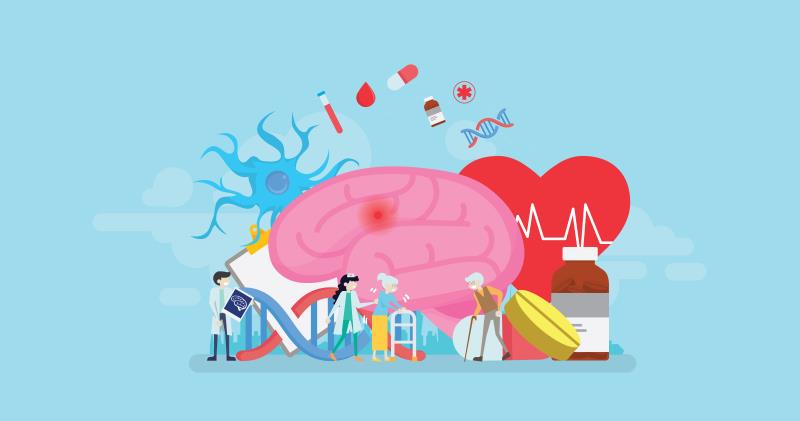 Case 1: An elderly patient on a vitamin K antagonist who had a fall
An 83-year-old female patient, who had a history of atrial fibrillation (AF) and ischaemic heart disease, was taking warfarin 3 mg QD for >6 months for stroke prevention. She had a ground-level fall at home and experienced headache afterwards. She was sent to the nearest Accident and Emergency (A&E) Department. CT showed intracranial bleeding with acute-on-chronic subdural haematoma on both sides of the brain. (Table) Blood test showed an international normalized ratio (INR) of 5.20. Following immediate treatment with prothrombin complex concentrate (PCC), she was referred to the neurosurgery department for further management. 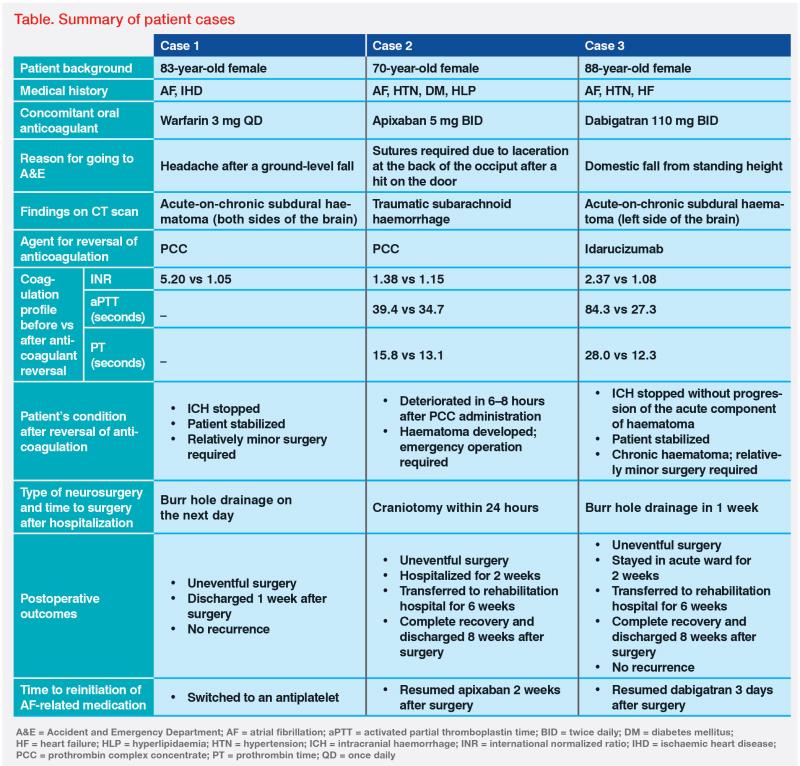 On the next day, the patient’s condition stabilized with an INR of 1.05, and she was considered fit for surgery. She underwent bilateral burr hole drainage for haematoma. The procedure was uneventful, and she was discharged about 1 week later. After consulting her cardiologist and physician about balancing the risks of ischaemic stroke and postoperative haemorrhage, the patient was switched from warfarin to an anti-platelet. (Table) As of June 2022, the patient was well with no post-operative complications.

Case 2: An elderly patient on a factor Xa inhibitor who had a head injury
A 70-year-old female patient, with diabetes mellitus, hypertension, hyperlipidaemia and AF, was taking a factor Xa (FXa) inhibitor (apixaban 5 mg BID) for stroke prevention for >6 months. She accidentally hit her head onto a wooden door, resulting in a laceration at the back of the occiput. Upon her arrival at the A&E for suture, CT showed traumatic cerebral haemorrhage. Since she was on anticoagulant therapy with FXa inhibitor, PCC was given immediately. (Table)

Unfortunately, the patient’s condition deteriorated in 6–8 hours after PCC administration. Repeat CT showed progressive haemorrhage and a haematoma. Within 24 hours after PCC administration, emergency craniotomy was performed for removal of the blood clot. The patient’s condition gradually improved after surgery, and the FXa inhibitor was resumed 2 weeks postoperatively. (Table) She was discharged upon full recovery after 6 weeks of rehabilitation.

Case 3: An elderly patient on a direct thrombin inhibitor who had a fall
An 88-year-old female patient with a history of hypertension, heart failure and AF was taking a direct thrombin inhibitor (DTI; dabigatran 110 mg BID) for stroke prevention for >6 months. She was admitted to hospital due to a domestic fall from standing height, with CT showing acute-on-chronic subdural haemato-ma on the left side of the brain. Given her medication history, she received one dose of a specific anticoagulant reversal agent (idarucizumab 5 g) intravenously to reverse the effect of the DTI immediately. Subsequently, the patient was sent to the neurosurgical ward for observation. (Table)

After receiving the antidote treatment for reversal of DTI, the patient’s condition stabilized. The acute component of the haematoma did not progress, becoming a chronic subdural haematoma in 7 days. The patient was then considered fit for burr hole surgery, which successfully evacuated the haematoma and was uneventful. (Table)

Upon discussion with her physician, the patient resumed anticoagulation with the DTI 3 days after the operation because of her underlying AF and high risk of embolic stroke. (Table) As of June 2022, the patient was in good condition without any bleeding events.

Discussion
Oral anticoagulant therapy is recommended in elderly patients with AF to reduce their risk of ischaemic stroke.1 In recent years, non–vitamin K antagonist oral anticoagulants (NOACs) have be-come increasingly used in AF patients. Just over half (54 percent) of patients receiving anticoagulants in Hong Kong are on NOACs.2

Compared with the vitamin K antagonist warfarin, NOACs provide comparable efficacy in stroke risk reduction and are easy to use, with no requirement for regular INR monitoring and fewer drug-drug and drug-food interactions.3,4 In addition, NOACs are associated with lower risks of intracranial bleeding, haemorrhagic stroke and all-cause mortality than warfarin.3,5

Neurosurgical intervention for head injuries
Craniotomy and burr hole surgery are the main neurosurgical procedures for treating acute subdural haematoma (which may develop soon after a severe head injury) and chronic subdural haematoma (which may develop a few days after a minor head injury), respectively.8 However, these procedures are high-risk interventions that carry risks of uncommon but serious complications, including further bleeding in the brain, deep vein thrombosis and stroke.8 Adequate preoperative haemostasis is thus essential for successful surgery and prevention of postoperative haemorrhage.9 Both prompt identification of coagulation status of elderly patients with TBI and immediate administration of an effective agent for anticoagulant reversal may reduce the risk of mortality or unfavourable outcome.6

Idarucizumab: A specific reversal agent for DTI
Idarucizumab is a humanized monoclonal antibody fragment that binds to dabigatran with approximately 300 times higher affinity than thrombin. This reversal agent is indicated in adult patients treated with dabigatran when rapid reversal of dabigatran’s effect is required: for emergency surgery or in life-threatening or uncontrolled bleeding.11

A sub-analysis of RE-VERSE AD (n=202), which included patients who required unplanned interventions, also showed complete reversal of dabigatran’s effect within minutes in almost all patients, including those requiring neurosurgery, with >91 percent achieving normal haemostasis. (Figure) The median time from administration of idarucizumab to emergency procedures was <2 hours in all patients, except in those who underwent neurosurgery (n=8), which was 3.3 hours.10 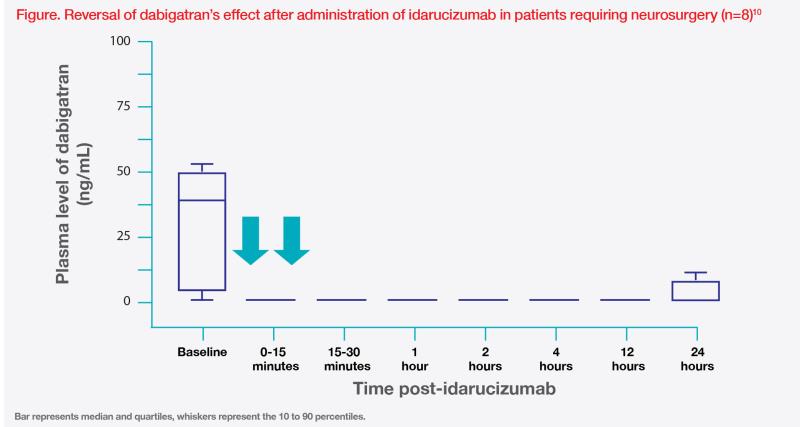 In patients with acute-on-chronic haematoma, if the acute component does not progress, it will usually resolve in 7–10 days. This will become a chronic haematoma, which is more fluid-like and less curd-like than an acute haematoma and may dissolve itself. However, during the time of dissolution, the volume of haematoma may expand and compress the brain, causing symptoms in about 10 days. In these cases, burr hole surgery will be performed to evacuate the haematoma.

So long as haemostasis can be achieved in a timely manner and the acute haematoma does not progress, the neurosurgeons would typically try to avoid craniotomy, as was seen in case 3. In both case 1 and case 3, the effect of anticoagulation therapy was promptly reversed, which halted the progression of the acute haematoma. Although it took longer for patient 1 to achieve haemostasis than patient 3 due to the nature of the individual anticoagulant, both patients’ TBI could be managed by burr hole surgery.

In contrast, soon after patient 2 arrived at the A&E, she was given reversal of anticoagulation that was nonspecific and ineffective in reversing the effect of the FXa inhibitors. Due to the rapid deterioration of her condition, emergency craniotomy had to be performed without achieving haemostasis, which put the patient at a high risk of postoperative complications.

Initial choice of anticoagulation
Approximately 30 percent of people ≥65 years of age suffer from falls and fall-related injuries each year.16 As the older population is growing rapidly, the healthcare cost is substantial and increasing worldwide.16,17 Hence, when choosing an oral anticoagulant for elderly patients, the increased risk of falls in daily life and the increased risk of bleeding during urgent operation should be taken into account. An anticoagulant with a specific reversal agent, such as DTI, would be useful in situations of emergency brain haemorrhage salvage. This may also help reduce the risk of postoperative complications and length of hospital stay.