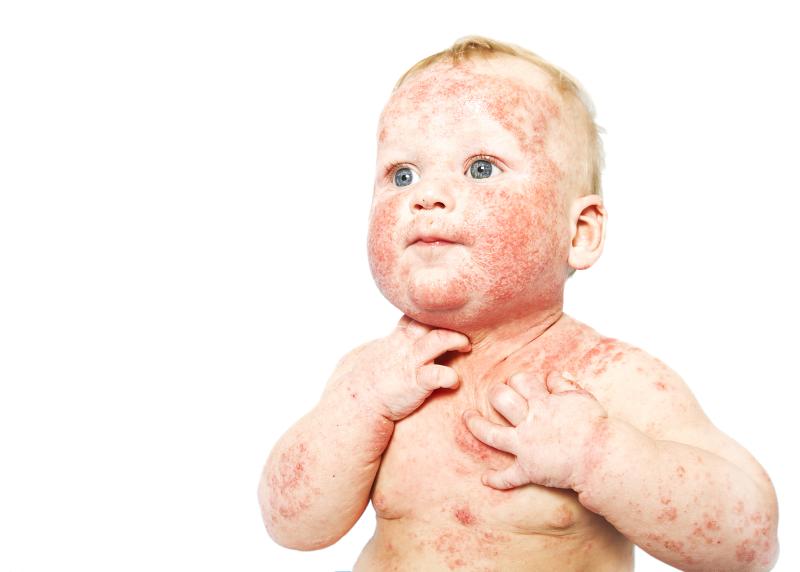 The presence of eczema or atopic dermatitis with concurrent allergic sensitization at 1 year of age was associated with an increased risk of developing asthma and food allergy in later childhood at 3 years old, according to the CHILD* study.

“Our findings are useful to help predict which children may develop asthma and allergies,” said lead author Maxwell Tran from McMaster University in Hamilton, Canada, who noted that although the filaggrin (FLG) gene variants are known risk factors for allergy, FLG genotyping is costly and not commonly used in clinical practice. “[T]his research offers healthcare professionals an alternative method of identifying at-risk children.”

The multicentre longitudinal cohort study included 2,311 children who completed skin prick testing at 1 year old, of which those who produced a ≥2 mm than that produced by the negative control to any of the 10 food or inhalant allergens were considered “sensitized”. They were assessed again at 3 years of age for asthma, food allergy, allergic rhinitis, and atopic dermatitis. [J Allergy Clin Immunol 2017;doi:10.1016/j.jaci.2017.08.024]

However, children with atopic dermatitis but were not sensitized to any allergen tested at age 1 year did not have a higher risk of developing asthma at age 3 years compared with the nonsensitized reference without atopic dermatitis (RR, 0.46, 95 percent CI, 0.11–1.93).

“Much of what happens to us later in life is related to the exposures we encounter in early childhood,” said study principal investigator Dr Malcolm Sears, a professor of medicine at McMaster University.

“A potential explanation [for the enhanced association between atopic dermatitis and food allergy in sensitized children] is that children shown to be sensitized to food allergens at age 1 year who also had atopic dermatitis might have consequently avoided the foods to which they were sensitized,” said Sears and co-authors, who believed that avoidance of or delayed exposure to certain food were associated with increased risk of food sensitization. [Pediatr Allergy Immunol 2017;28:471-477]

“Children with atopic dermatitis and evidence of sensitization to common food or inhalant allergens as early as age 1 year represent a high-risk subgroup that warrants further examination in primary intervention studies,” they added.