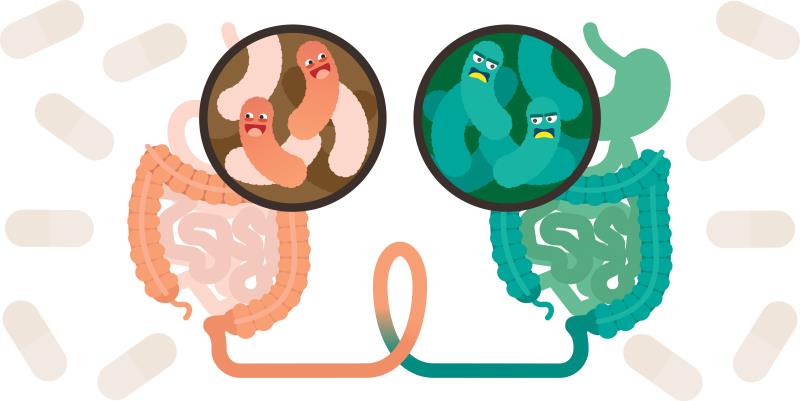 Donor selection for faecal microbiota transplant (FMT) can make a difference to maintenance of long-term remission in patients with ulcerative colitis (UC), reveals a study presented at the 2020 Crohn's & Colitis Congress (CCC).

Specifically, using faecal donation from siblings rather than from parents led to a greater success in sustaining clinical remission of UC. In addition, having a donor who was close in age (<10 years difference) to the recipient also improved remission rate in the long term.

“This is the first report of FMT to reveal importance of donor selection for long-term maintenance for UC,” said Dr Koki Okahara of Juntendo University Hospital in Tokyo, Japan who presented the study.

In the prospective, nonrandomized study, 79 patients (aged ≥20 years) with active UC received a triple-antibiotic therapy of amoxicillin, fosfomycin, and metronidazole followed by FMT (n=47) or triple-antibiotic therapy alone (n=32). Active UC was defined as satisfying any one of the following criteria: Lichtiger’s clinical activity index of ≥5, or an endoscopic Mayo score of ≥1. [CCC 2020, abstract 25]

After 4 weeks, more patients treated with FMT showed clinical response* compared with those who received triple-antibiotic alone (65.9 percent vs 56.2 percent). Similarly, remission** rate was also higher in the FMT group than the triple-antibiotic therapy alone group (40.4 percent vs 18.7 percent).

Clinical response was maintained*** through 12 months in significantly more patients treated with FMT than antibiotics alone (n=13 vs 10; p=0.046). The same was true out to 24 months, with 33.3 percent of the patients receiving FMT maintaining nonrelapse compared with 22.2 percent treated with antibiotics only (p=0.034).

In particular, the maintenance benefit was more pronounced when the donor’s age was no more than 10 years apart from the recipient vs donor-recipient pairs with ≥11 years difference (n=16 vs 14; p=0.003).

In keeping with this, faecal donation from siblings also led to maintenance of remission more often than donation from parents (n=13 vs 7; p=0.006).

To find out which species of the gut microbiota could potentially play a role in maintaining remission from FMT, the researchers analysed the change in microbiota of faecal samples collected from a subset of patients. Faecal analysis over 24 months revealed that certain species in the phylum Bacteroidetes, such as Bacteroides dorei and Bacteroides uniformis colonized from donor to patient and remained for 24 months.

Changes in the Bacteroidetes phylum has previously been shown following sequential triple antibiotic + FMT treatment for UC, which the researchers pointed out, presents a factor correlated with clinical responses.

“We show the importance of efficient microbiota stabilization and matching between donors and patients for the efficacy maintenance of FMT following a triple-antibiotic therapy,” said Okahara.

“[The regimen] exhibited reassuring clinical outcomes in terms of both short and long term,” he added. “[Elucidating] the mechanism of donor-patient matching may … [help] realize an effective stratified FMT [in the future].”