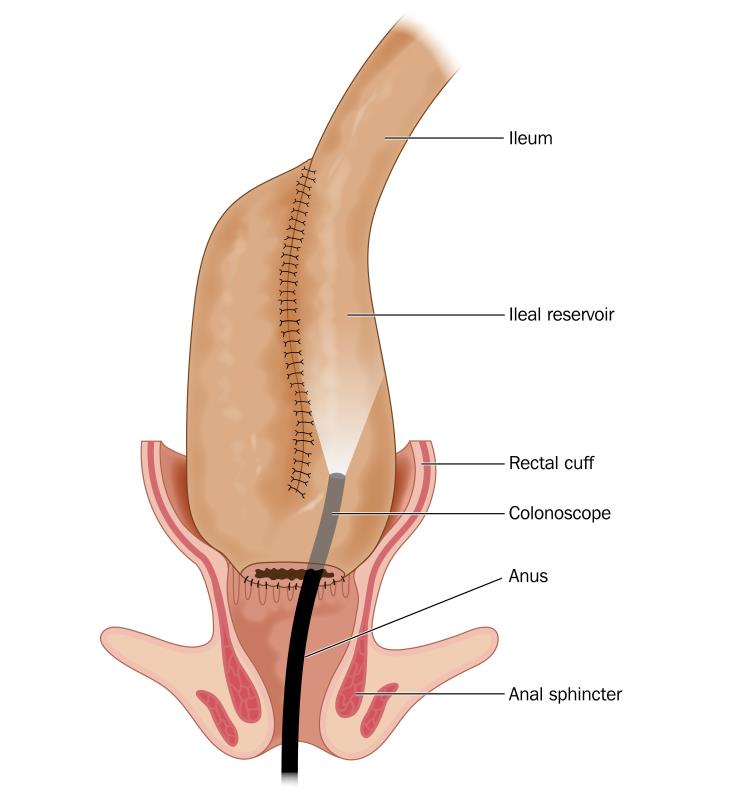 Some patients with colitis are more likely than others to develop cuffitis after proctocolectomy with ileal pouch-anal anastomosis (IPAA), according to a retrospective study presented at the annual Crohn’s & Colitis Congress.

Restorative proctocolectomy with IPAA is the most common procedure for patients with colitis. However, pouchitis or inflammation of the surgically constructed pouch can develop in up to 80 percent of patients post-surgery and despite the high prevalence, endoscopic phenotypes remain to be elucidated.

“Cuffitis or inflammation of the rectal cuff is significantly associated with pouch excision and a promising target to improve the outcome of pouchitis,” said study author Dr Shintaro Akiyama from the University of Chicago in Chicago, Illinois, US. He and his team sought to assess the frequency and characteristics of inflammation involving the rectal cuff by reviewing 1,081 pouchoscopies from 426 patients with inflammatory bowel disease (IBD) who underwent proctocolectomy with IPAA. Patient charts and endoscopic findings, including ulcerations, erosions, and loss of vascularity, were also looked into. Overall, 208 patients had normal cuffs and 73 had cuffitis. Majority of the patients (57 percent male, 92 percent Caucasian, mean age 26 years at diagnosis) were diagnosed with ulcerative colitis (91 percent) prior to surgery. Some had indeterminate colitis (5.8 percent), others had Crohn’s disease (1.7 percent). [Crohn’s and Colitis Congress 2020, abstract 24]

Notably, no significant differences between groups were observed in terms of prior immunomodulator or steroid use, or presence of Clostridium difficile, Akiyama said.

Session moderator Dr Edward Barnes from the University of North Carolina at Chapel Hill, North Carolina, US commented that majority of the patients undergoing colectomy will have ulcerative colitis. Hence, inflammation and having more remaining colon tissue after the procedure are important risk factors for cuffitis. “This study confirmed what we think and see in clinical practice.”

On a question from the floor whether surgical characteristics might have varied between the groups, Akiyama responded that the practice at his hospital centre is to staple and not to hand-sew in patients with a more severe disease. For mild disease, surgeons use the hand-sewn approach, he added.

Dr Jeremy Adler of the University of Michigan in Ann Arbor, Michigan, US, who was unaffiliated with the study, said it could be that sicker or older patients underwent stapled anastomosis, which may have contributed to the patterns seen in the study.