Clarithromycin: Beyond its role as an antibiotic
01 Dec 2019
Macrolide antibiotics are derived from the Streptomycesspecies. These contain either 14-membered (erythromycin [ERM],clarithromycin [CAM], roxithromycin [RXM]), 15-membered(azithromycin [AZM]) or 16-membered (spiramycin, josamycin,midecamycin) macrocyclic lactone rings. They inhibit proteinsynthesis by reversibly binding to the 23S ribosomal RNA (rRNA)in the 50s subunit of the bacterial ribosome. Traditionally,macrolides are used as first-line agents in respiratory, skin,soft tissue, and urogenital infections, and they are also activeagainst gram-positive cocci and atypical pathogens. 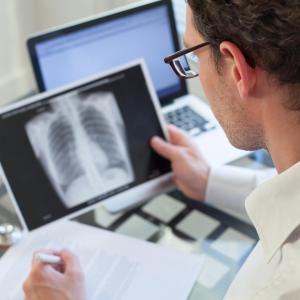 Osimertinib preferable in first-line treatment of EGFR-mutant NSCLC
Jairia Dela Cruz, 2 days ago
Nonsmall cell lung cancer (NSCLC) patients harbouring sensitive EGFR mutations may fare well with the third-generation tyrosine kinase inhibitor osimertinib as an upfront therapy, with the results of a network meta-analysis showing that the drug tops other currently available options in terms of progression-free survival and tolerability.

Developmental Care of the Preterm Neonate 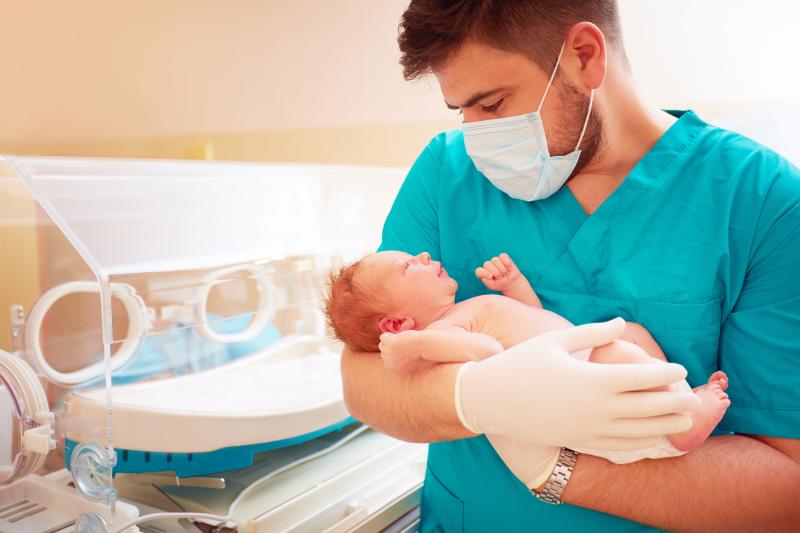 INTRODUCTION
Advances in antenatal, perinatal, and neonatal care lead to increased survival of preterm infants. As survival rates continued to increase, so did the angst of “intact survival,” or survival without disabilities. A recent meta-analysis revealed that at school-age, cognitive scores of former very low birth weight (VLBW) infants are approximately 10 points lower than those of matched control children1 due to difficulties with attention, behaviour, visual-motor integration, and language performance.2-3

NEURODEVELOPMENTAL CARE
Neurodevelopmental care is a broad term applied to physician–nursing practices, physical environmental elements, and family involvement philosophies that may favourably impact the neurodevelopment of the premature newborn.4 The fundamental objective of developmental care is to support the child’s brain development.5 (See Table 1) Sensory input affects the wiring of neuronal networks and their mode of functioning as well as the behaviour of the newborn. Infants born very prematurely may be overstimulated during a critical period when their brain is developing rapidly. Treatment and care procedures received during hospitalisation may cause discomfort and pain in the very preterm infants, and making it difficult for these infants to experience undisturbed periods of restful sleep. In rodents, pain during the neonatal period has been found to result in long-lasting enhancement of stress responses,6 altered neuronal circuits,7 learning deficits, and behavioural changes.8 Similarly, variations in maternal care have been shown to promote synaptogenesis, learning, and memory,9 as well as influence the expression of neuropeptide receptors related to normal gender-specific adult behaviours.10

NEUROSENSORY DEVELOPMENT
Neurosensory development follows a sequential pattern. Sensory development begins with sensations particularly to the skin, followed by kinaesthetic, chemosensory, auditory and visual development.11-12 (See Figures 1 and 2) The timing, intensity, and nature of exogenous stimulation are all important to normal neurosensory development. This staged maturation coincides with typical in utero sensory exposures, and with the uterine environment providing a more controlled and filtered exogenous sensory input. This is the rationale for limiting excessive sensory stimulation during early sensory development. Supported by animal studies, “Sequential Theory of Sensory Development” suggests that atypical and mistimed sensory stimulation play an influential role in brain development.13 Atypical onset and intensity of developing sensory experience afterwards (eg, early or excessive visual input) may interfere with the development or function of an earlier developing system (eg, auditory or chemosensory). Early or enhanced visual experiences may lead to accelerated development of the visual system with an associated decline in auditory or chemosensory responsiveness.14-16

ROLE OF SLEEP IN BRAIN DEVELOPMENT
The “Ontogenic hypothesis” theorizes that normal sleep cycles, with a predominance of rapid eye movement (REM) sleep, are necessary for early brain development.17-18 With maturation, there is a gradual shift towards adult sleep–wake cycles, and a marked decrease in sleep requirements with relatively less REM sleep with age.17 This association of extended REM sleep during a period of rapid brain maturation, stabilising to adult levels with brain maturity, is demonstrated in animals as well.19 This progressive maturation process in the prematurely born infant is not equivalent to the normal, uninterrupted progression in term-born infant, and the undefined and obvious challenges of prematurity may result in subsequent brain reconfiguration or brain plasticity.4 (See Figure 3)

BEHAVIOURAL LANGUAGE OF THE PRETERM NEONATE
“Synactive Theory of Development”20 is the framework for understanding infant’s behaviour. The principle of synaction (See Figure 4) states that development proceeds through the continuous balancing of approach and avoidance, continuous intraorganism subsystem interaction, and differentiation and organism-environment interaction to realize a hierarchical species’ unique developmental agenda. Observation of the preterm infant’s behaviour provides a way to infer the infant’s developmental goals and assess the infant’s current functional competence and state of equilibrium. These behaviours were noted under the three main systems, (1) Autonomic system; (2) Motor system; and (3) State system, with emphasis on the emerging attention system. The fourth system, (4) Self-regulation or regulatory system, reflects the infant’s current successes and efforts in returning to sub-system reintegration and calmness once the three basic subsystems have been disrupted and disorganized. All these reliably observable behavioural communications provide valuable information for the clinician and caregiver in how best to structure and adapt care, and interaction to enhance the infant’s competencies and strengths and prevent or diminish signals of stress, discomfort, and/or pain.

AGE-APPROPRIATE DEVELOPMENTAL CARE
Ideally, in utero environment is where infants receive positive sensory input, protection, and a variety of stimuli in an integrated and multimodal fashion. In utero, the foetus is provided secure boundaries for generalized flexion and gentle, secure containment for motor development, auditory input from mother’s voice, bowel sounds, blood flow from placenta and umbilical cord, as well as filtered sounds from the extrauterine environment. The traditional task- and protocol-focused NICU environment presents complete separation from the parent, sensory overload, and simultaneously, the frequent experience of invasive and painful events. (See Figures 5a and 5b) Prolonged diffuse sleep states, unattended crying, abrupt blood flow changes due to shifts into supine position, routine and rapid handling, invasive procedures such as suctioning, high ambient sound and light levels, lack of opportunity for sucking, and often poorly timed social and caregiving interactions, all exert deleterious effects upon the immature brain and appear to alter its subsequent development. The focus is now being placed on maximizing the quality of care in the NICU environment. Tables 2 and 3 showed the stages of neurosensory development and age-appropriate developmental care based on gestational age group, respectively.

POSITIONING AND CONTAINMENT
In utero, the infant is flexed, midline position with head, back, and feet contained by the uterus. It allows soothing, self-regulation by touching the face and sucking of fingers. Muscular development is dependent on buoyancy and contained uterine space. When a preterm infant is born, it loses the containment of the uterus. Without the surrounding amniotic fluid, the effect of gravity is felt and this affects muscular development. The goal of positioning and containment is to mimic intrauterine experience which is to facilitate flexed, midline positioning of extremities. Swaddling and containment of the infant with general flexion of the extremities and trunk is a general approximation of this effect.21 It is a means to promote sleep with decreased awakenings during quiet sleep (QS) and longer periods of REM sleep. It also appears to improve self-regulation, diminished pain, and stress responses, and decrease arousal level including crying, and may promote neuromuscular development in the preterm infant.

SENSITIVE HANDLING AND CUE-BASED CARE
There are various handling techniques to support the neurodevelopmental needs of the preterm infants, and these include gentle arousal (talking softly and touching gently before handling), gentle and slow minimal handling, containment during care procedures, and swaddling for weighing and bathing. Avoid sudden position changes and overstimulation. Whenever possible, try to minimize unnecessary light and noise during handling. A clutter of toys may be overwhelming. To facilitate self-consoling/calming behaviour, provide soothing interventions or comfort measures such as non-nutritive sucking, containment of infant’s arms and/or legs by gently holding the infant’s hands together on the chest and/or hold the legs tucked up, provide grasping opportunities, and kangaroo care (skin-to-skin contact). To support the vestibular system, the infant is gradually turned while maintaining a flexed and midline position. Be mindful to stress cues during handling, and respond by providing containment holds and time-outs (short breaks) to enable physiological recovery before resuming the activity with a much slower pace.

MODULATION OF SOUND EXPOSURE
Noise is an iatrogenic environmental hazard in the NICU that can have deleterious effects on preterm and term infants. Excessive noise in the NICU can result in undesirable physiologic responses, disrupt normal sleep patterns, cause noise-induced hearing loss, and affect caregivers’ communication and job performance. Safe sound levels in the NICU are an important aspect of optimizing care for this vulnerable group of patients. The American Academy of Pediatrics and Recommended Standards for Newborn ICU Design have guidelines for acceptable sound levels in the NICU.22-23 However, observational studies have shown that sound levels in the NICU often exceed these recommendations:

MODULATION OF LIGHT EXPOSURE
A preterm infant’s ability to protect the eyes is limited by his physiologic immaturity. The pupillary light reflex, which controls the amount of light entering the eye, is highly correlated with gestational age. Fielder24 found that no infant less than 30 weeks’ gestational age at birth had a pupillary reflex. At 34 weeks’ gestation, only 86% have light reflex and at 35 weeks’ gestation, all infants had the reflex present. Infants who had no reflex also had a larger papillary diameter. Therefore, the very immature infant receives a larger retinal light dose than their older counterparts. Direct ambient light has a negative effect on the development of a preterm infant’s visual neural architecture.

·         Standard 22 – Ambient Lighting in Infant Care Areas: Ambient lighting levels in infant spaces shall be adjustable through a range of at least 10 to no more than 600 lux (approximately 1–60 foot candles), as measured at each bedside. Both natural and electric light sources shall have controls that allow immediate darkening of any bed position sufficient for transillumination when necessary.

·         No direct view of the electric light source or sun shall be permitted in the infant space. Any lighting used outside the infant care area shall be located to avoid infant’s direct line of sight to the fixture.

About the author
Dr Imelda L. Ereno is a Senior Resident Physician in the Department of Neonatal and Developmental Medicine, Singapore General Hospital.

Clarithromycin: Beyond its role as an antibiotic
01 Dec 2019
Macrolide antibiotics are derived from the Streptomycesspecies. These contain either 14-membered (erythromycin [ERM],clarithromycin [CAM], roxithromycin [RXM]), 15-membered(azithromycin [AZM]) or 16-membered (spiramycin, josamycin,midecamycin) macrocyclic lactone rings. They inhibit proteinsynthesis by reversibly binding to the 23S ribosomal RNA (rRNA)in the 50s subunit of the bacterial ribosome. Traditionally,macrolides are used as first-line agents in respiratory, skin,soft tissue, and urogenital infections, and they are also activeagainst gram-positive cocci and atypical pathogens.

Osimertinib preferable in first-line treatment of EGFR-mutant NSCLC
Jairia Dela Cruz, 2 days ago
Nonsmall cell lung cancer (NSCLC) patients harbouring sensitive EGFR mutations may fare well with the third-generation tyrosine kinase inhibitor osimertinib as an upfront therapy, with the results of a network meta-analysis showing that the drug tops other currently available options in terms of progression-free survival and tolerability.