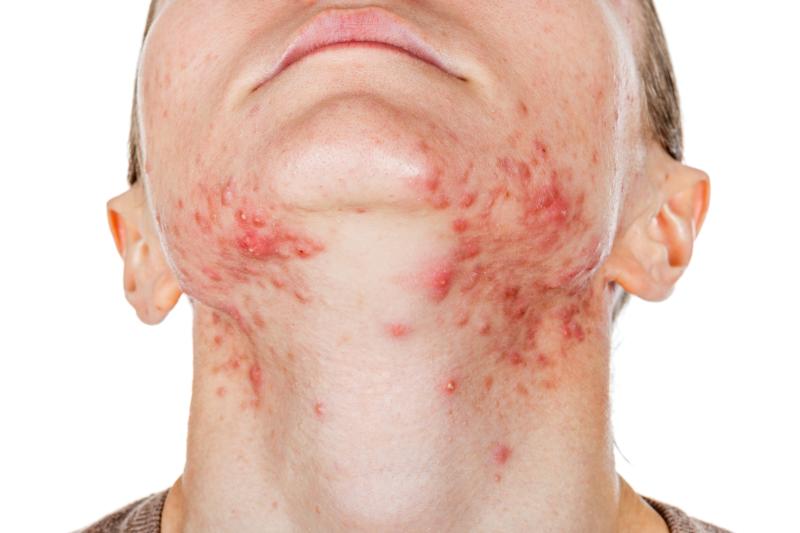 The use of epidermal growth factor receptor (EGFR) inhibitors for the treatment of nonsmall cell lung cancer (NSCLC) commonly triggers cutaneous side effects, which often leads to drug reductions or discontinuation, reports a new study at the recently concluded 2020 Virtual Congress of the European Academy of Dermatology and Venereology (EADV 2020).

While these toxicities could negatively impact oncologic outcomes, a multidisciplinary approach to their management could substantially soften the blow, according to the researchers.

The prospective observational study included 87 consecutive patients (mean age, 67±11 years; 42.5 percent male) with advanced NSCLC, of whom 81.6 percent had cutaneous reactions to treatment. Most of them (41 percent) had two side effects, while 37 percent and 22 percent had only one and three or more reactions, respectively. All patients had been treated with EGFR tyrosine kinase inhibitors from January to August 2019. [EADV 2020, abstract P0102]

Acneiform eruptions were the most common form of cutaneous side effects and were reported in 49 patients, corresponding to an incidence rate of 56.3 percent. Nearly a third of its episodes were only grade 1 in severity, though in seven patients, the eruptions were severe.

Other commonly observed cutaneous reactions were xerosis (48.3 percent), pruritus (24.1 percent), nail changes (39.1 percent), mucositis (29.9 percent), and hair changes (12.6 percent). While the researchers reported severe cases of these toxicities, most were only mildly or moderately severe.

In response to the cutaneous side effects, oncologists decreased the dose of the EGFR inhibitors in 18 percent of the patients. Treatment was discontinued in 14 percent of those with acneiform eruption, 12 percent with xerosis, and 9 percent with paronychia.

In dealing with the side effects, oncologists opted for a multidisciplinary approach, enlisting the help of dermatology specialists. After the evaluation of the toxicities and the appropriate treatment based on current guidelines, improvements were seen in patients who needed to terminate EGFR inhibitor treatment. After an average of 10±7 days, all oncologic treatment resumed.

The researchers also sought to identify potential predictors of the side effects. They found that the use of Afatinib appeared to significantly raise the likelihood of nail changes (p<0.01) and mucositis (p<0.005), as compared with other agents. No patient-related factors displayed such an interaction with cutaneous toxicities.

“These findings underscore the advantages of a multidisciplinary management of EGFR cutaneous reactions involving dermatologists, as this could lead to lower discontinuation rate of the targeted treatment,” the researchers said.