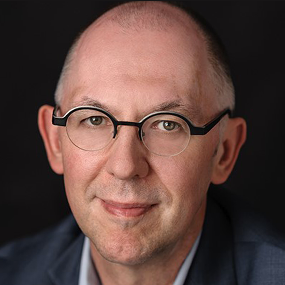 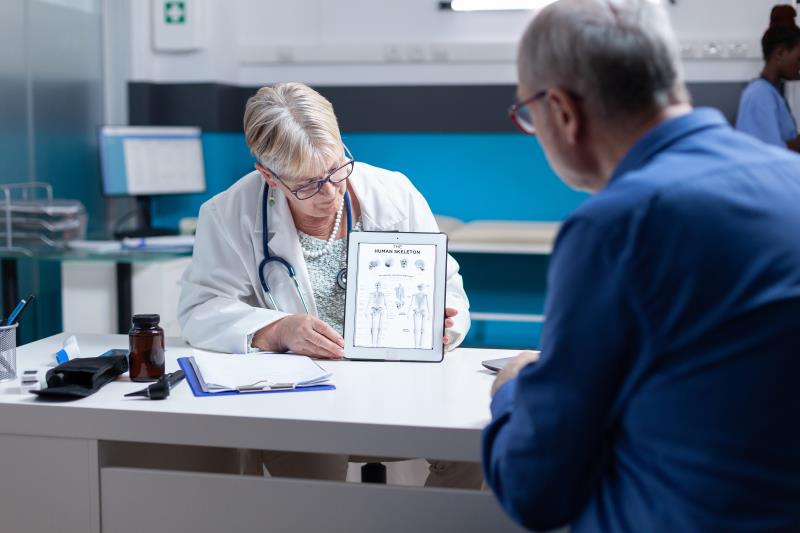 Men with metastatic prostate cancer (mPC) have an elevated risk of skeletal complications either due to bone metastases (skeletal-related events [SREs]), or from osteoporosis induced by androgen deprivation therapy (ADT). Two key opinion leaders recently shared their perspectives on bone complications in mPC as well as the use of bone-targeted agents (BTAs) such as denosumab (Xgeva) to reduce the risk of bone complications.

Prior research has demonstrated the increased prevalence of osteoporosis and osteoporotic fractures in men following ADT. In one study, the rate of fracture was 19.4 percent ≥5 years post-diagnosis among ADT recipients compared with 12.6 percent among non-recipients (p<0.001). [N Engl J Med 2005;352:154-164] In another study, ADT exposure for ≥6 months was associated with an increased fracture risk (hazard ratios [HRs], 1.65 and 1.46 for fragility fracture and any fracture, respectively). [J Urol 2010;184:918-923]

The second mechanism is through cancer-induced bone complications. Metastases of primary cancer to the bone can lead to SREs such as pathological fracture, spinal cord compression, and bone surgery or radiation. This can increase cancer burden leading to increased pain and health resource utilization and poorer quality of life. 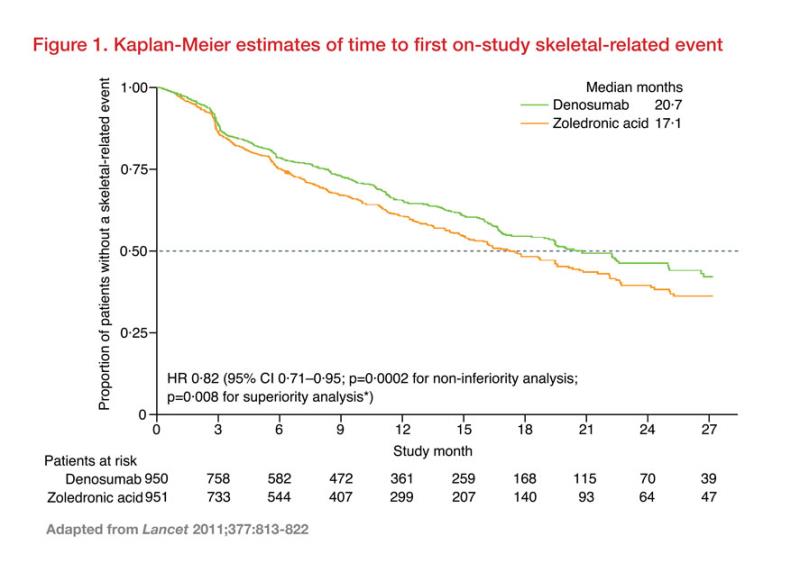 Renal impairment-associated AEs occurred in 16 and 15 percent of zoledronic acid and denosumab recipients, respectively. This is of specific interest particularly in elderly patients with CRPC who are prone to renal dysfunction. Monitoring of renal function and subsequent dose interruption or discontinuation, required with zoledronic acid, is not required with denosumab. Zoledronic acid is also administered intravenously as opposed to subcutaneous administration of denosumab.

Another study examined the safety of long-term denosumab (120 mg Q4W) or zoledronic acid (4 mg Q4W) in patients with breast or prostate cancer. After denosumab showed efficacy in the double-blinded treatment phase, patients were given the option of continuing open-label denosumab for another 2 years. New diagnosis of ONJ occurred in 6.9 and 5.5 percent of patients who continued or switched to denosumab, respectively, while hypocalcaemia occurred in 4.3 and 3.1 percent, respectively. [Support Care Cancer 2016;24:447-455]

Before starting bisphosphonates or denosumab, baseline BMD and dental clearance should be carried out, and normal levels of calcium and 25-OH vitamin D should be established and supplementation administered, said Chiong.

One year later, the PSA level increased to 0.59 μg/L and at 15 months, was 1.86 μg/L. Choline PET CT revealed the presence of one left iliac bone metastasis and one presacral LN avidity (suspicious for metastasis). ADT and calcium and vitamin D supplementation were initiated. PSA levels decreased to 0.07 μg/L after 3 months and remained suppressed at <0.1 μg/L while on ADT. BMD test 2 years later showed total and neck of femur T-scores of -1.4 and -2.2, respectively, indicative of osteopenia. The patient initiated subcutaneous denosumab (60 mg every 6 months) as osteoporosis prophylaxis.

After 2 years on ADT, PSA levels increased to 0.88 μg/L and to 10.1 μg/L over 8 months, though the patient had no bone-related symptoms. Bone and CT scans revealed three sclerotic bony metastases to pelvis and spine and enlarged pre-sacral LN. The patient then underwent bilateral orchidectomy, initiated abiraterone acetate + prednisolone for mCRPC, and continued calcium and vitamin D supplementation and denosumab.

The patient was on denosumab 120 mg/month for almost 2 years and is currently on 120 mg every 2 months. The patient has no skeletal complications or bone pain and undergoes regular monitoring of calcium and vitamin D levels while remaining on supplementation. Recent conventional imaging (bone and CT scans; for rising PSA levels) showed no new metastases.

The National Comprehensive Cancer Network recommends BTAs in men with CRPC with bone metastases. The European Society for Medical Oncology recommends that BTAs be initiated at bone metastases diagnosis, with denosumab or zoledronic acid initiated in men with CRPC and bone metastases, regardless of presence of symptoms. The US National Osteoporosis Foundation recommends BTAs in men aged ≥50 years with low bone mass (T-score -1.0 to -2.5) at the femoral neck, total hip, or lumbar spine and a 10-year probability of hip fracture ≥3 percent or a 10-year probability of a major osteoporosis-related fracture ≥20 percent.

All patients receiving ADT require bone loss monitoring, said Tombal. Despite the introduction of new survival prolonging agents, SRE prevention remains crucial. Patients with elevated SRE risk should receive BTAs at the doses suggested for SRE prevention. Patients who are at risk for osteoporosis should receive BTAs at the dose recommended for osteoporosis.