Dapagliflozin attenuates renal decline with or without CKD 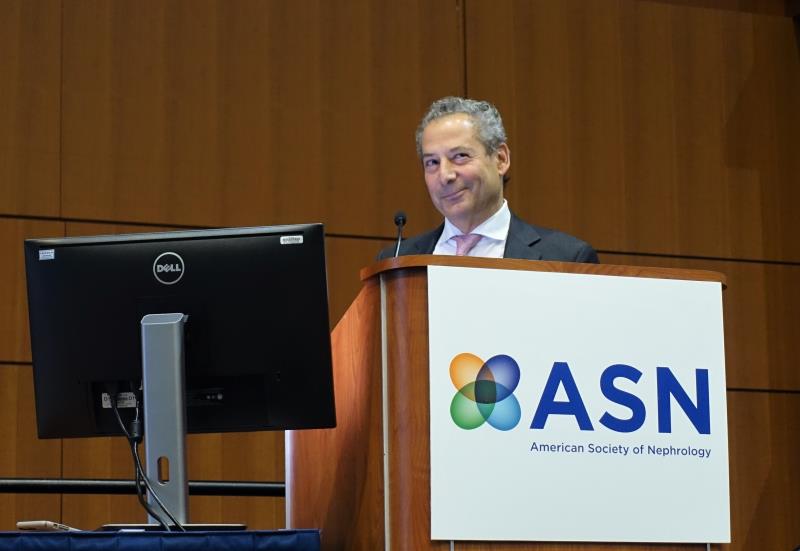 Treatment with the SGLT2* inhibitor dapagliflozin appears to attenuate renal decline in patients with heart failure and reduced ejection fraction (HFrEF), regardless of whether they have CKD, according to a prespecified subanalysis of the landmark DAPA-HF trial presented at ASN Kidney Week 2019.

The renal composite outcome of time to renal death, end-stage renal disease (ESRD), or ≥50 percent decline in eGFR was observed in 28 patients in the dapagliflozin group vs 39 in the placebo group. This translated to a hazard ratio (HR) of 0.71 (95 percent confidence interval [CI], 0.44 –1.16; p=0.17), which did not reach statistical significance. [ASN Kidney Week 2019, abstract FR-OR133]

“The curves started to separate relatively in 12 months  and continued to separate, but we didn’t have a lot of endpoints here,” said principal investigator Dr Scott Solomon, a cardiologist  from the Brigham and Women’s Hospital in Boston, Massachussetts, US. “When we looked at the adjudicated acute kidney injury [AKI], defined as 2 times elevation in serum creatinine since the last core lab measurement, we saw more endpoints. There was a 64 percent overall reduction in acute AKI  in patients treated with dapagliflozin.”

The change in GFR trajectory over the course of the trial was similar with other SGLT2 trials. There was a fairly rapid decline in GFR in patients treated with dapagliflozin, followed by a flattening out of the GFR slope. These slopes, when compared either from baseline or after 14 days, were significantly different in favour of dapagliflozin, said Solomon.

A win for SGLT2i in an HF population

DAPA-HF was a global trial of 4,744 patients with HFrEF from 20 countries, randomized to dapagliflozin 10 mg once daily or placebo, on top of contemporary therapy for HF, and followed for a median duration of 18.2 months.

Results of the primary endpoint, presented at ESC 2019 in Paris, showed that dapagliflozin, on top of  standard therapy, markedly reduced the risk of worsening HF (unplanned hospitalization or an urgent visit for HF requiring intravenous therapy) or cardiovascular (CV) death, and improved symptoms in patients with HFrEF.

The scale of benefits with dapagliflozin — 26 percent reduction in the composite endpoint, 30 percent reduction on worsening HF,  and mortality reductions of 18 percent for both CV and all-cause deaths – was something that equalled, if not surpassed, the achievements of other landmark trials in this space, dating back more than two decades, according to study discussant Dr Marco Metra from the University of Brescia, Italy.

Importantly, the relative and absolute risk reductions in death and hospitalizations were consistent across subgroups, which included patients with and without diabetes. Rates of adverse events were low and no different between groups.

“However, the extent to which dapagliflozin can impact renal function in patients with HF has been unknown,” said Solomon. “Hence, we examined whether dapagliflozin would delay the progression of worsening renal function, defined as time to renal death, reaching ESRD, or a ≥50 percent sustained decline in eGFR, both in patients with or without CKD.”

eGFR was calculated using the CKD-EPI equation and patients were divided based on eGFR (<60 mL/min/1.73m2 or ≥60 mL/min/1.73m2); eGFR over time was assessed in repeated measures using mixed effect models.

“Overall, dapagliflozin was as effective in reducing worsening HF, CV death, and all-cause mortality in patients with CKD as in patients without CKD,” said Solomon. “The 29 percent reduction in the renal outcome did not reach statistical significance possibly due to a small number of events and short trial duration. Nevertheless, the magnitude of the effect was similar in patients with and without T2D.”