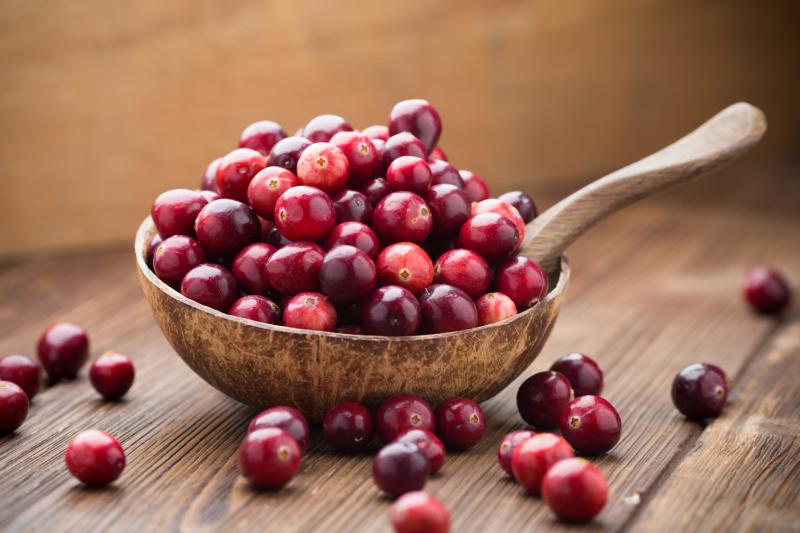 Eating a small cup of cranberries daily is apparently good for the brain, enhancing memory consolidation and retrieval for everyday events as well as neural functioning in healthy older adults, as shown in a recent study.

“We found that the participants who consumed [freeze-dried cranberry powder for 12 weeks] showed significantly improved episodic memory performance in combination with improved circulation of essential nutrients such as oxygen and glucose to important parts of the brain that support cognition—specifically memory consolidation and retrieval,” said lead researcher Dr David Vauzour from University of East Anglia's Norwich Medical School in Norwich, England.

“We also observed a significant decrease in low-density lipoprotein (LDL) cholesterol following cranberry intake, along with a trend in total cholesterol decreases,” Vazour said. “This supports the idea that cranberries can improve vascular health and may in part contribute to the improvement in brain perfusion and cognition.”

Vazour further noted that cranberry intake seemed to better benefit older male participants, who showed more favourable changes in body weight, fasting glucose, high-density lipoprotein (HDL) cholesterol, and blood pressure. “Such results are in agreement with data demonstrating the anti-obesogenic impact of cranberries, although most of the information is derived from animal studies.” [Food Res Int 2021;147:110539]

Cranberries (Vaccinium macrocarpon) are a rich source of (poly)phenols—such as anthocyanins, proanthocyanidins (both A- and B-type), flavanols, and hydroxycinnamic acids—which are recognized for their antioxidant and anti-inflammatory properties. These properties are believed to help protect against neurodegeneration, which is characterized by progressive changes in several interlinked cellular and molecular mechanisms, such as chronic neuroinflammation, oxidative stress and metabolic imbalances, as well as loss of vascular integrity and function. [J Sci Food Agricult 2018;100:5111-5116; Foods 2019;8:8080340; Age 2005;27:49-57; Nutrit Res 2011;31:190-196]

“The findings of [our] study are very encouraging, especially considering that a relatively short 12-week cranberry intervention was able to produce significant improvements in memory and neural function,” Vazour said. “This establishes an important foundation for future research in the area of cranberries and neurological health.”

The study included 60 participants (mean age 65 years, 58.3 percent female), all of whom reported being in good health and not consuming any food supplements or medications that would interfere with the intervention. Twenty-nine participants received 4.5 g of freeze-dried cranberry powder (equivalent to one cup or 100 g of fresh cranberries) daily, while 31 received placebo. All baseline values were similar in the two groups.

Vazour acknowledged that the relatively small sample size of the study might have been a limiting factor in terms of achieving sufficient power to detect significant differences in both cognition and brain perfusion. He called for additional studies with a large sample size to validate the present findings and to explore whether the positive changes associated with cranberry intake extend to a clinical population of cognitively impaired adults.