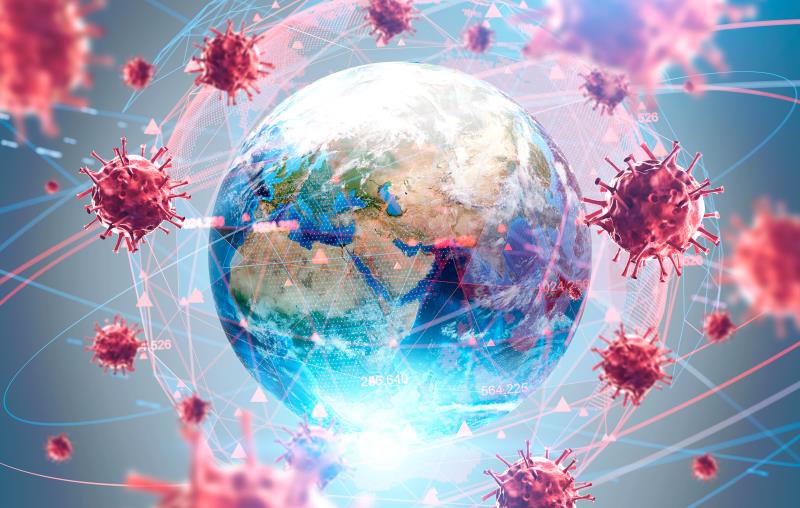 COVID-19 is officially a pandemic — the first to be caused by a coronavirus, the WHO* declared on Mar 11.

Calling the pandemic “a global health crisis unlike any in the 75-year history of the United Nations [UN]”, UN Secretary-General António Guterres highlighted that “COVID-19 is killing people, as well as attacking the real economy at its core – trade, supply chains, businesses, [and] jobs.” 1

Fallouts from the pandemic are of an unparalleled scale — cascading human suffering, plunging economy globally, and turning people’s lives upside down.

A global recession, which Guterres believed to be possibly of “record dimensions”, is almost a certainty.

“Our world faces a common enemy. We are at war with a virus,” he declared.

Within a span of 3 months, what started out as an outbreak from a seafood market in China had treaded across 200 countries and territories around the globe, claiming more than 37,000 lives to date along its track.

Worse still, the number of daily new cases continues to mount globally, with no signs of abating — in particular, in the US, Iran, and certain countries in Europe such as Italy, Spain, Germany, and France.

On Mar 16, the total number of confirmed cases outside of China hits above 83,000 — surpassing that inside the country, the first time since the COVID-19 outbreak.

“Many countries have exceeded the capacity to care for even mild cases in dedicated health facilities, with many unable to respond to the enormous needs of the elderly,” remarked Guterres during his Mar 19 UN’s address.1

Within the region of Southeast Asia, cases have soared as well — by mid-March, numbers have crossed the triple-digit mark in at least five countries including Malaysia, Thailand, Indonesia, the Philippines, and Singapore.

In Singapore, where the outbreak has largely been contained thus far, also saw a rise in daily cases in March. More than two-thirds were imported cases involving mostly residents or long-term pass holders returning from abroad.

“The health catastrophe makes clear that we are only as strong as the weakest health system,” said Guterres. “Global solidarity is not only a moral imperative, it is in everyone’s interests.”

“Urgent and aggressive measures are the need of the hour. We need to act now,” implored Dr Poonam Khetrapal Singh, WHO Regional Director for Southeast Asia.2

“When you realise that a public health emergency of international concern was declared on January 30, and as we speak, we are now mid-March, it’s very important to understand that any country that still has not heeded the call needs to be acting and acting fast: not least preparing the population through appropriate risk communication,” said Dr Gauden Galea, WHO Representative in China, during an interview with the UN media.3

Several countries have come under fire for not acting sooner, despite the unmistakable gravity of the situation. By the time they came to grips with the reality, the virus had already taken a foothold within their home ground. When the healthcare system is overwhelmed, doctors would have to triage which patients get to access the limited healthcare resources — inevitably leaving some denied of a chance to survive.

To avoid the healthcare system from collapsing, measures for what epidemiologists called “flattening the curve” of the pandemic need to be enacted, swiftly. The aim is to slow down the spread of the virus such that large proportions of the population are not ill at the same time.

Normally, a pandemic curve follows an exponential growth, which would culminate at a high peak, and then decline naturally when all susceptible individuals have been infected, according to Galea. However, this did not happen in China.

Aggressive containment measures were taken to test, trace, and isolate infected cases, and lockdown of an entire city was ordered on the morning of Jan 23, when the total confirmed cases in the country hit 571 with 17 dead as of the previous day.

The country has since shown a downward trend in daily number of new cases from its peak in mid-February.

“China has demonstrated that the course of the outbreak can be altered,” Galea said. “One: the shape of the course of the events … appears very unnatural. It is an epidemic that has been nipped as it was growing and stopped in its tracks.”

“So, that’s a big lesson that the natural course of the outbreak does not need to be a very high peak that overwhelms health services.  This lesson in containment, therefore, is a lesson that other countries can learn from and adapt for their own circumstances,” he stated during the UN’s interview.

Italy, seeing its healthcare systems driven to the brink by the blitz of the microscopic invader, became the first country outside of China to impose a lockdown — initially in the region of Lombardy, which then extended to other northern provinces and later the entire nation.

The national quarantine serves to restrict movement of the population, which hopefully, would slow down the spread of the virus. Closure of all nonessential businesses was mandatory.

As the daily new cases and death tolls continued to climb globally, other countries followed suit in locking down their cities/countries. So far, the UK, France, Spain, Belgium, Germany, Denmark, Malaysia, New Zealand, Ireland, El Salvador, and Peru have gone on nationwide lockdowns. The US and the Philippines have imposed enhanced community quarantine in certain regions and are mulling over the expansion of quarantine zones, as of Mar 30.

“It appears that the strict measures China took may have ‘bought the world some time’ but did not prevent the global dissemination of SARS-CoV-2,” commented experts in JAMA’s opinion column. [JAMA 2020;doi:10.1001/jama.2020.3072]

The question of how best to fight the war remains a topic of debate, and varies depending on the phases of outbreak, cultures, resources, governments, and laws involved.

Having kept the outbreak largely under control without resorting to lockdowns so far, Singapore, Hong Kong, and Japan held important lessons, according to a commentary from ten experts led by Dr Helena Legido-Quigley of NUS** Saw Swee Hock School of Public Health, Singapore. [Lancet 2020;395:848-850]

These countries had focused on early detection, quarantine, and treatment — principles of which constitute the overarching theme of the recommendations by the WHO, after a fact-finding mission in China.

To achieve these, the three countries had scaled up their laboratory testing capacity, readjusted surveillance systems to identify potential cases, and adapted financing measures to shift all direct costs for treatment to the governments, pointed out Legido-Quigley and co-authors.

“The first [lesson] is that integration of services in the health system and across other sectors amplifies the ability to absorb and adapt to shock,” they wrote.

“The second is that the spread of fake news and misinformation constitutes a major unresolved challenge. Finally, the trust of patients, healthcare professionals, and society as a whole in government is of paramount importance for meeting health crises,” the experts continued.

“Timely, accurate, and transparent risk communication is essential and challenging in emergencies because it determines whether the public will trust authorities more than rumours and misinformation,” they explained.

In Singapore, detailed clinical and logistics information is disseminated to the public daily through mainstream media and Whatsapp group. These platforms were also used to debunk circulating misinformation.

In addition, there was also a stepwise series of entry restrictions for visitors from China, which later extended to those from France, Germany, Italy, Iran, Republic of Korea, and Spain. In view of the rising imported cases, no visitors are allowed to enter or transit through Singapore starting Mar 23, while all returning residents are served 14-day stay-home notice (except those returning from Hubei province, who would be quarantined).

From containment to mitigation

Containment strategies such as quarantine work when the number of infected patients is small and in concentrated locales, according to Drs Stephen Parodi and Vincent Liu of Kaiser Permanente, Oakland, California, US, in an opinion paper. [JAMA 2020;doi:10.1001/jama.2020.3882]

“As COVID-19 spreads both in the US and around the world, it may not be possible to care for all patients in this manner,” wrote Parodi and Liu. “It is critically important that the strategy for slowing the spread of the COVID-19 pandemic change from containment to mitigation.”

Mitigation strategies aim to slow the further spread of virus and reduce the demand for health care use. Social distancing is one measure under the strategy, which can take the forms of prohibition of large gatherings, staggered work schedules, and distance learning for students, among others.

“[We] must take a comprehensive approach. Not testing alone. Not contact tracing alone. Not quarantine alone. Not social distancing alone. Do it all,” said WHO Director-General Dr Tedros Adhanom Ghebreyesus during a recent WHO media briefing on COVID-19.4

“This is, above all, a human crisis that calls for solidarity,” he proclaimed.