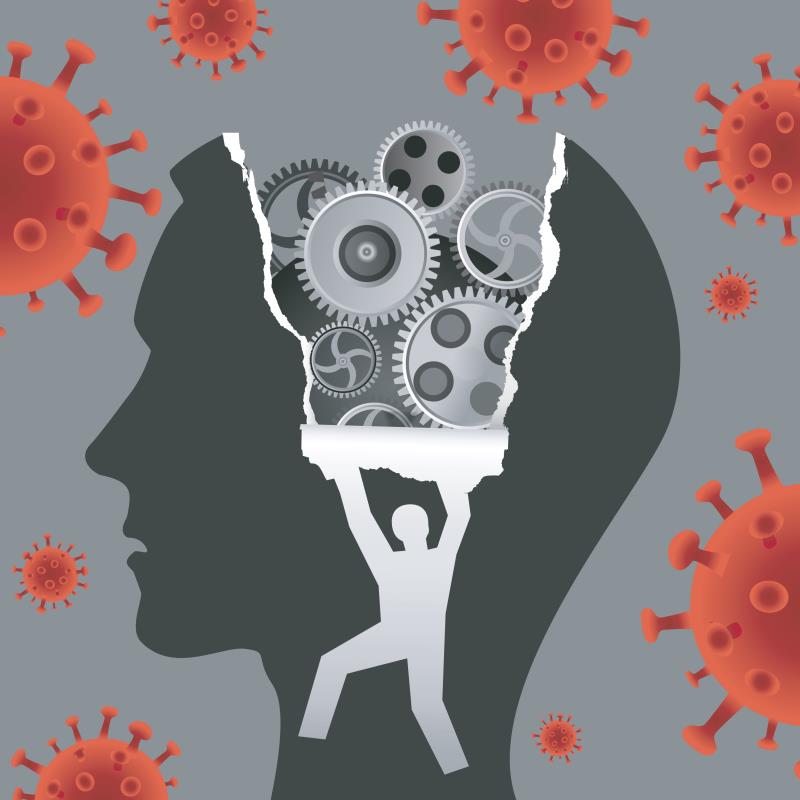 Some COVID-19 patients experienced cognitive and behavioural problems within 2 months after discharge from hospital, with certain symptoms persisting to 10 months, reveals a longitudinal study presented at EAN 2021.

“About 30 percent of COVID-19 survivors manifest with cognitive disturbances and 30–40 percent with psychopathological disorders,” said the researchers.

“These disturbances have been associated with the severity of the acute-phase respiratory symptoms, infection-triggered neuroinflammation, cerebrovascular alterations and/or neurodegeneration …  [but it remains] to be clarified whether [these] cognitive and psychological disturbances persist in the post-COVID phase,” they continued.

During the 2-month period after discharge from hospitalization (sub-acute phase), more than half of the patients had cognitive issues — with the most common being executive dysfunction such as difficulty in paying attention, planning, and problem solving (16 percent). [EAN 2021, abstract EPR-067]

Other cognitive disturbances that were identified as possible overhangs of the infection included visuospatial problems (6 percent) and impaired memory (6 percent). Nearly a quarter of participants had a combination of symptoms linked to executive function (23 percent).

In addition, psychological issues affected one in five patients, with 16 percent and 18 percent of them reporting depression and post-traumatic stress disorder (PTSD), respectively, during the sub-acute phase.

While the incidence of total cognitive disturbances decreased from 53 percent to 36 percent at 10-month follow-up from hospital discharge, PTSD and depressive symptoms persisted in similar proportion of participants as the sub-acute phase.

“Our study has confirmed significant cognitive and behavioural problems are associated with COVID-19 and persist several months after remission of the disease,” said principal investigator Professor Massimo Filippi from University Vita-Salute San Raffaele in Milan, Italy.

“A particularly alarming finding is the changes to executive function we found, which can make it difficult for people to concentrate, plan, think flexibly and remember things. These symptoms affected three in four younger patients who were of a working age,” he noted.

Another factor associated with worse executive function performance was the severity of acute respiratory symptoms due to COVID-19 during hospitalization (r=-0.347; p<0.01).

On the other hand, there was no significant association between brain volume and cognitive performance — indicating that the cognitive and behavioural changes arose independently of brain structural integrity.

“Whether these alterations are directly linked with the infection itself or with its related consequences is still to be determined, as well as whether they are reversible or part of a neurodegenerative process,” Filippi stated.

“Larger studies and longer-term follow up are both needed, but this study suggests that COVID-19 is associated with significant cognitive and psychopathological problems,” said lead author Dr Elisa Canu of San Raffaele Hospital, Milan, Italy.

“Appropriate follow-up and treatments are crucial to ensure these previously hospitalized patients are given adequate support to help to alleviate these symptoms,” she suggested.