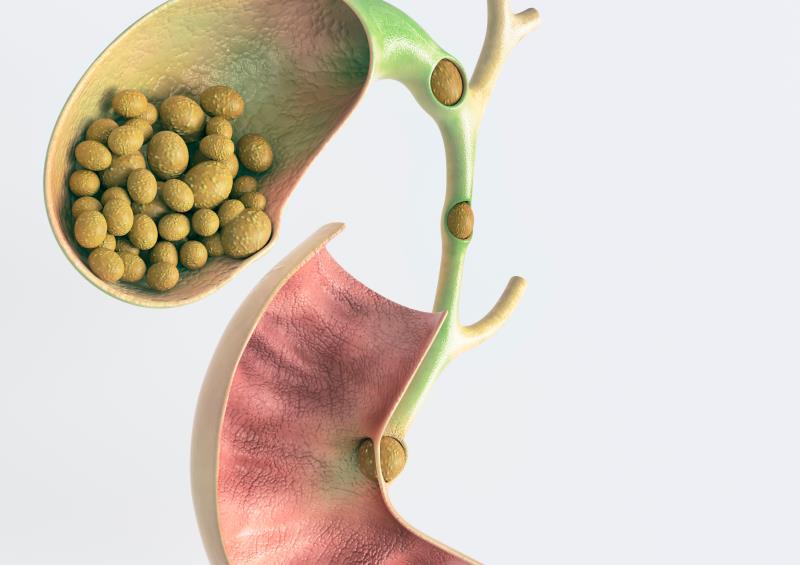 In obese patients without gallstones, a 6-month treatment course of ursodeoxycholic acid (UDCA) following bariatric surgery may reduce their likelihood of developing symptomatic gallstones, according to findings of the UPGRADE trial from The Netherlands presented at DDW 2021.

Participants in this multicentre, double-blind, superiority trial were 985 patients with morbid obesity and an intact gallbladder who were scheduled to undergo bariatric surgery (Roux-en-Y gastric bypass [RYGB] or sleeve gastrectomy). They were randomized 1:1 to receive UDCA (900 mg/day; n=492) or placebo (n=493) for 6 months.

A total of 477 and 490 individuals in the UDCA and placebo arms, respectively, were included in the modified intention-to-treat analysis. Mean age of participants was 45 years, 80 percent were female, and mean BMI at surgery was 40 kg/m2. RYGB was the most common procedure, being conducted in 91.9 percent (n=889) of patients. At baseline, 19.5 percent (n=189) of patients had asymptomatic gallstones, as determined through pre-randomization gallbladder ultrasound.

Among patients without gallstones at baseline, the absolute incidence of asymptomatic gallstones was 4.2 and 8.9 percent with UDCA and placebo treatment, respectively, with 21 patients needing to be treated to prevent one patient from developing asymptomatic gallstones. Gallstone formation was also significantly reduced with UDCA vs placebo (11 percent vs 21 percent; RR, 0.52, 95 percent CI, 0.36–0.75; p<0.0001).

Side effects were generally rare, with number of side effects and serious adverse events (AEs) comparable between study arms. No serious AEs were considered related to the trial drug. Of the three deaths that occurred, none were deemed related to surgery or treatment.

While the mechanism behind gallstone formation following bariatric surgery is yet unknown, multiple factors may be at play including genetics and lithogenic genes, gallbladder hypomotility, intestinal factors, rapid phase transition, and hepatic hypersection of cholesterol. “One contributing factor is the imbalance of biliary lipids which can lead to cholesterol supersaturation and crystallization,” she said.

Preventive strategies such as prophylactic cholecystectomy at time of bariatric surgery is considered too invasive and may be associated with higher morbidity.

Evidence has suggested that UDCA may reduce gallstone formation during rapid weight loss, though there is no high-level evidence that this treatment extends to the reduction of symptomatic gallstone disease, she continued.

“[Based on the results of this study,] we consider the administration of UDCA desirable in patients without gallstones at baseline,” concluded Haal.