Coronavirus surrogates may stay on meat, fish in cold storage for up to a month 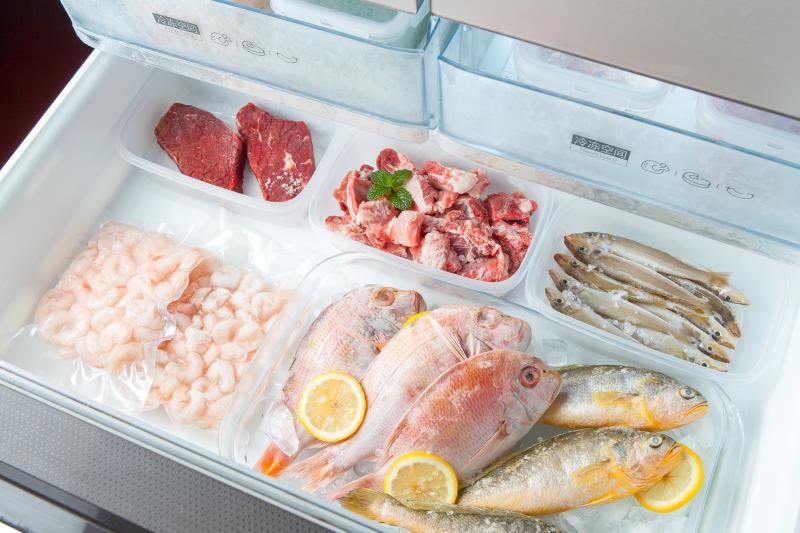 Surrogates of SARS-CoV-2* – a lipid enveloped RNA bacteriophage (Phi6) and two animal coronaviruses (CoVs; MHV and TGEV**) – survived in cold-storage temperatures for 30 days, a study finds, highlighting the risk of viral survival on food products and potential transmission on humans upon consumption.

“As enveloped viruses such as SARS-CoV-2 and other [CoVs can] survive refrigeration and freezing for long periods of time, there is a potential risk of viral persistence on contaminated food products that could result in subsequent exposure and transmission,” said the researchers. “[Hence,] a greater understanding of the survival of these viruses at low temperatures on meat and fish products, as well as other foods, is needed and should be encouraged.”

“[Our study showed that] viral surrogates differed in survival, depending on food product and temperature, but overall, viruses survived for [the full 30-day period] at high concentrations at both refrigerated (4°C) and frozen temperatures (–20°C),” said the researchers.

“[There were] generally greater reductions at the refrigerated than the frozen temperature,” the researchers said, suggesting that the surrogates persisted under colder conditions.

The results on Phi6 align with data showing the ability of Phi6 to stay for up to 60 days on food surfaces at the two temperatures evaluated.

“[The] TGEV reductions were not significantly different at either temperature on any of the foods tested, indicating that this virus is reduced to similar extents between the two temperatures and across all four food products,” the researchers explained. Having low log10 reductions for both temperatures imply that TGEV can remain on food surfaces for long periods in cold storage.

Apart from temperature, virus recovery methods and the biological properties of the surrogates could have influenced the differences in outcomes, they noted. Although surface hydrophobicity of the viruses and the food surfaces evaluated were not characterized in the trial, these may have also factored in the survival differences. [www.who.int/publications/i/item/covid-19-and-food-safety-guidance-for-food-businesses, accessed August 7, 2022]

“We provide evidence of SARS-CoV-2 surrogates surviving for relatively long and varying time periods on refrigerated and frozen meat and fish, potentially due to the low temperatures that allow virus survival,” said the researchers. “[This] is a significant and concerning finding.”

“Although you might not store meat in the fridge for 30 days, you might store it in the freezer for that long,” emphasized first author Assistant Professor Emily Bailey from Campbell University, Buies Creek, North Carolina, US, in a news release.

As such, rigorous and sustained food sanitation from harvest through distribution are warranted to prevent contamination, they stressed. “[T]here is a need to better address the lack of or inadequate disinfection of these foods prior to meat packaging.”

Despite evidence showing the ability of these surrogates to survive under different environmental conditions, using them instead of the actual SARS-CoV-2 may have limited the findings, the researchers noted. [Environ Sci Technol 2017:51:8692-8700; Environ Sci Technol Lett 2020;7:544-553; Environ Sci Technol 2021:55:2674-2683; Appl Environ Microbiol 2021;87:e0153221] “[T]he differences in virus survival observed in our results suggest that one indicator virus may not be predictive of the behaviour of pathogenic SARS-CoV-2.”

Further studies should thus look into other viruses, including SARS-CoV-2 itself and other human and animal CoVs, to evaluate their ability to survive on various meat and fish products and even in fresh produce.