Coronavirus can travel up to 4 metres in air 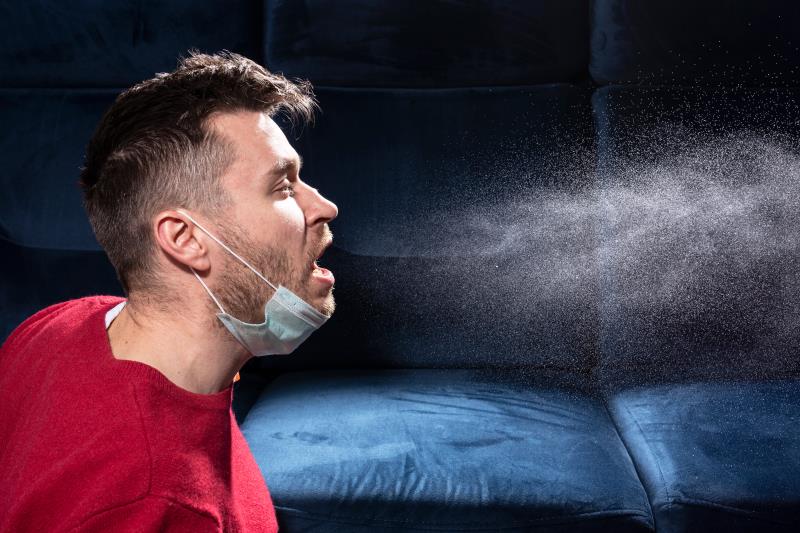 SARS-CoV-2, the virus causing COVID-19, was widely distributed on object surfaces and could spread as far as 4 metres in the air based on sampling from hospital wards in China — a distance that far exceeds the current guideline recommendations on social distancing.

Detection of the virus in air samples at this distance also suggests a risk of aerosol transmission, a topic of debate which until now remains up in the air.

Among the air samples collected from the hospital ICU isolation wards and general wards housing COVID-19 patients, 35 percent of the samples from ICU and 12.5 percent from general wards tested positive for SARS-CoV-2. [Emerg Infect Dis 2020;doi:10.3201/eid2607.200885]

The rates of positive detection varied by sampling sites, with those near and downstream of the patients more likely to be laden with the virus: 44.4 percent of patient wards sampling, 35.7 percent near the air outlets, and 12.5 percent of samples from the doctors’ office area turned out positive.

The upstream area also posed exposure risk to aerosol transmission, with a maximum distance of 4 metres.

Nonetheless, the researchers acknowledged that as the minimal infectious dose is still unknown, the viral load at such distance may not necessarily be infectious. Also, positivity by nucleic acid test does not necessarily indicate that the virus was viable.

“Knowing the extent of environmental contamination of SARS-CoV-2 in COVID-19 wards is critical for improving safety practices for medical staff and answering questions about SARS-CoV-2 transmission among the public,” said the researchers.

“The environmental contamination was greater in the ICU than in the general wards; thus, stricter protective measures should be taken by medical staff working in the ICU,” they added.

Based on swabs of surfaces, environmental contamination was also higher in the ICU than the general wards (43.5 percent vs 7.9 percent).

Relatively high number of floor swab samples were tested positive, especially in the ICU (70 percent vs 15.4 percent in general wards), which the researchers believed was “because of gravity and air flow causing most virus droplets to float to the ground.”

“In addition, as medical staff walk around the ward, the virus can be tracked all over the floor, as indicated by the 100 percent rate of positivity from the floor in the pharmacy, where there were no patients,” they observed.

Indeed, half of the samples taken from shoe soles of the ICU staff were positive for the virus, indicating that these may be a potential carrier of virus transmission.

“We highly recommend that persons disinfect shoe soles before walking out of wards containing COVID-19 patients,” the researchers highlighted.

Not only was the virus detected in the air and on the ground, it was present on many surfaces of objects frequently touched by the patients or hospital staff, such as  computer mice, trash cans, sickbed handrails, and doorknobs.

“SARS-CoV-2 was widely distributed in the air and on object surfaces in both the ICU and general wards, implying a potentially high infection risk for medical staff and other close contacts,” they concluded.

As no medical staff at the hospital had been infected, this according to the researchers, “indicates that appropriate precautions could effectively prevent infection … medical staff should perform hand hygiene practices immediately after patient contact.”

“Our findings suggest that home isolation of persons with suspected COVID-19 might not be a good control strategy. Family members usually do not have personal protective equipment and lack professional training, which easily leads to familial cluster infections,” they cautioned.