Comprehensive genomic profiling in oncology – from vision to reality 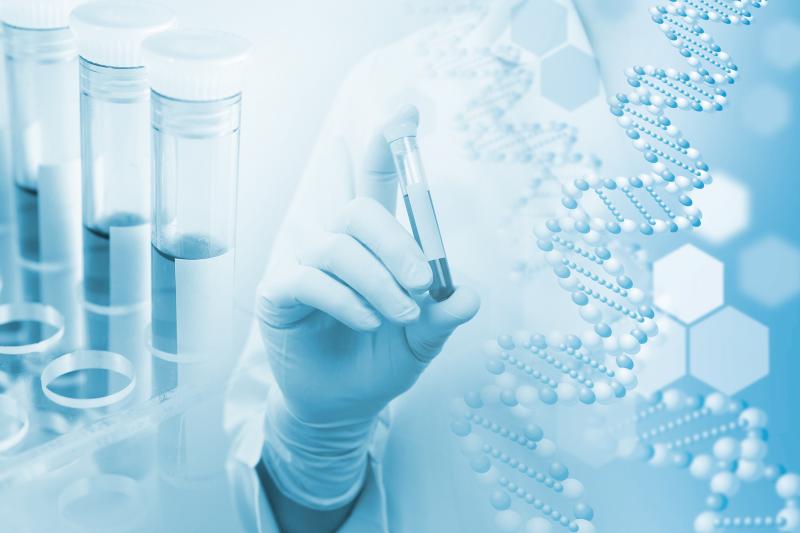 Comprehensive genomic profiling (CGP) has emerged as a key driving force behind personalized cancer care. With the wealth of data available with CGP, medical oncologists now have in their armamentarium a tool that could enable them to provide patients with the optimum treatment. At a Roche Foundation Medicine-sponsored symposium held at the 2018 European Society of Medical Oncology (ESMO) Congress in Munich, Germany, a panel of experts reviewed key data on CGP, with a focus on the treatment of advanced cancers.

Molecular data and the future of personalized oncology treatment
“In just the last 10 years alone, we have experienced a breathtaking acceleration in scientific progress, particularly in the field of oncology and haematology,” said Dr Niko Andre, head of Global Medical Affairs, Roche Pharma AG, in Basel, Switzerland. The wealth of data generated from molecular biology as well as the advancements in targeted therapies mean that physicians can now prescribe targeted therapies matched to specific DNA mutations in tumours.

The detailed report provided by FMI includes information on therapies that could clinically benefit the patient’s tumour type and relevant clinical trials.

Real-world application of CGP in lung cancer
To demonstrate the utility and benefits of CGP in real world, Dr Rohit Lal, consultant medical oncologist at Guy’s Cancer Centre in London, UK, presented two case studies, one of which was in advanced lung cancer. The first case study was that of a 62-year-old man who presented in September 2014 with lesions in his left lung, multiple pleural and subpleural lesions, minimal left pleural effusion, and an 8 cm right upper pole renal cyst. A further biopsy confirmed metastatic carcinoma.

“At this point, the patient began carboplatin pemetrexed chemotherapy, while a FoundationOne® test was ordered to guide further treatment,” said Lal. The FoundationOne® report showed that the patient’s disease had a MET*  amplification which drove the initial treatment strategy. More importantly, in providing a list of the available therapeutic options that had been approved at the time (including crizotinib and cabozantinib), Lal noted that the report helped motivate a switch in therapy and identified crizotinib as a second-line therapy.

The switch to crizotinib resulted in a metabolic response and improved overall performance status. The patient continued treatment with crizotinib for 6 months until pulmonary progression, and was then switched to cabozantinib. “In October 2015, having been on cabozantinib for 9 months, the patient’s CT revealed stable disease. However, he died of complications associated with his condition.”

Utility of FoundationOne® in rare tumour types
In his second case study, Lal described a case of a 63-year-old woman who was first diagnosed with an aggressive and rare form of squamous thymic carcinoma (stage 4b at diagnosis). The patient underwent postoperative carboplatin-paclitaxel chemotherapy (6 cycles), followed by radical radiotherapy. However, she experienced relapsed pulmonary metastases 9 months after completion of chemotherapy. “At this point, we carried out another biopsy and sent her sample for molecular testing.”

Lal highlighted that a key difficulty in thymic carcinoma is the lack of FDA-approved therapies. “Her FoundationOne® report revealed a number of genomic alterations, which helped us to triage a treatment strategy, rather than directly guide therapy,” he noted. The patient was given second-line palliative chemotherapy, which she did not benefit from, and subsequently pembrolizumab and zoledronic acid which resulted in a response in pulmonary metastases and stable bone disease.

“Ultimately, in a situation where there is a rare tumor, even in cases where there are no approved treatment options, CGP can help physicians learn more about their patient’s disease, thereby enabling them to design a treatment strategy that could benefit the patient,” Lal concluded.

CGP to address the unmet needs of cancer of unknown primary (CUP)
“CUP syndrome is an entity whereby metastases are found, but the primary tumour, despite a thorough workup, cannot be identified. CUP is associated with a poor prognosis,” said Professor Alwin Krämer from the German Cancer Research Centre and Department of Internal Medicine, University of Heidelberg, Germany.

If neither the clinical presentation nor the histopathology is suggestive of a potential primary tumour, which is true in the majority of cases, CUP is currently treated with an unspecific platinum-based chemotherapy, said Krämer.

A novel strategy is to treat based on genomic alterations, identified through genomic profiling. Indeed, CGP on 200 CUP specimens using FoundationOne® assay has shown that many CUP samples have at least one genomic alteration that is potentially targetable. [JAMA Oncol 2015;1:40-49]

To address the need to demonstrate the efficacy and safety of molecularly-guided therapy versus standard chemotherapy across a large cohort of patients with CUP, the CUPISCO** trial was designed. [Ann Oncol 2017;28:3015-3021]

“CUP is the ideal model to test clinical utility of CGP in a histology-independent setting. Ultimately, CUPISCO aims to demonstrate the benefit associated with using CGP to define treatment arms and provide molecularly targeted therapies in patients with CUP.”

Addressing poor prognosis in triple-negative breast cancer (TNBC) via molecularly-guided trials
“TNBC is a heterogenous disease associated with poor outcomes, and to date, there are still limited therapy options for patients affected by it. Compared with other breast cancer subtypes, the prognosis for TNBC is generally worse, coupled with the fact that it tends to metastasize and relapse,” said Dr Rebecca Dent, senior consultant and chief of the Breast Medical Oncology Service, National Cancer Centre, Singapore.

Ross and Gay et al. reported that a high number of TNBC patients with residual disease (who had already received neoadjuvant chemotherapy) relapsed; however, CGP revealed that up to 90 percent of these patients have a targetable pathway. [Pathology 2017;49:120-132]

“In general, TNBC has the most genomic instability and highest mutational burden, and is most likely to benefit from immune checkpoint inhibition,” said Dent.

In the LOTUS*** study, CGP using FoundationOne® assay identified TNBC patients with prolonged progression-free survival (PFS) on ipatasertib + paclitaxel, she pointed out. Subjects were 124 patients with locally advanced or metastatic TNBC who were randomized to receive the oral AKT-inhibitor ipatasertib or placebo, both in addition to paclitaxel as first-line therapy. While the improvement in PFS with ipatasertib was modest in the intention-to-treat population versus placebo (6.2 vs 4.0 months; log-rank p=0.037); the PFS benefit was more prominent in the subgroup with PI3K/AKT pathway-activated tumours identified retrospectively with CGP (median, 9.0 vs 4.9 months, HR, 0.44; log-rank p=0.041). (Figure 2), [Lancet Oncol 2017;18:1360-1372]

“This is an exciting time for TNBC as it is only through molecularly-guided, biomarker-driven trials that we will be able to identify a target that will provide positive results in TNBC,” said Dent. 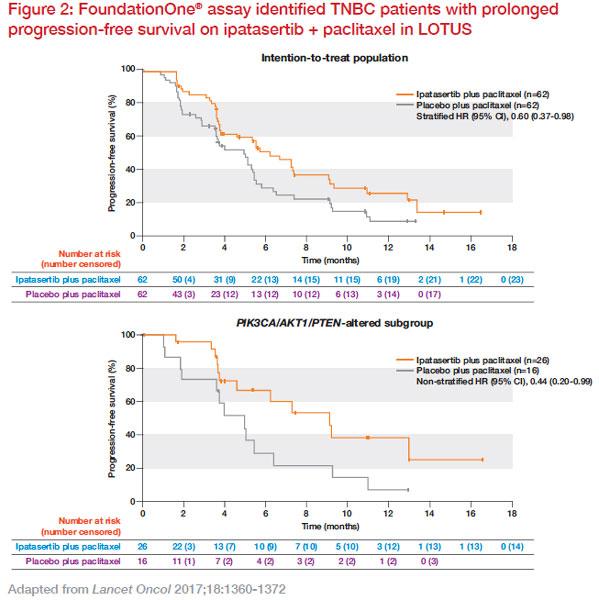 CGP for novel assay and clinical trial design in lung cancer
“TMB is an emerging biomarker for immune therapy response across a variety of solid tumours; patient who tend to respond to immunotherapy fall into the category of those with high TMB, especially in cancers such as NSCLC and SCLC,” said Professor Rafal Dziadziuszko, deputy chair of the Department of Oncology and Radiotherapy, Medical University of Gdansk, Poland.

A key challenge in thoracic tumours lies in obtaining samples from certain patient groups. “It is estimated that approximately 20 percent of patients cannot be rebiopsied and hence, there is a need to diagnose these patients based on blood assessments,” said Dziadziuszko. “There is a significant need for an approach that can detect genomic alterations and measure TMB when tumour tissue is unavailable.”

As circulating tumour DNA derived from blood can provide an alternative source of diagnostic material, Roche and FMI have developed a blood TMB (bTMB) assay, which according to Dziadziuszko, “is essentially a combination of the FoundationACT® and FoundationOne® assays.” The bTMB assay is analytically validated for accuracy and precision with as little as 1 percent tumour content (maximum somatic allele frequency) in 20 ng of cell-free DNA, using plasma samples from the OAK and POPLAR trials. [Nat Med 2018;24:1441-1448]

Patients with limited or no tissue may now have the opportunity to test whether they could potentially benefit from immunotherapies, thus providing more options for patients with lung cancer, he said.

Summary
In conclusion, CGP, with its ability to aid in identification of targetable pathways and targeted therapies, holds many potential benefits for cancer patients, especially those with advanced or rare cancers. This has been convincingly demonstrated via real-world case studies and trials in lung cancer, CUP, and TNBC. Also, by providing additional genomic information, CGP elucidates which patients may benefit from certain immunotherapies.
LOGIN TO READ FULL STORY