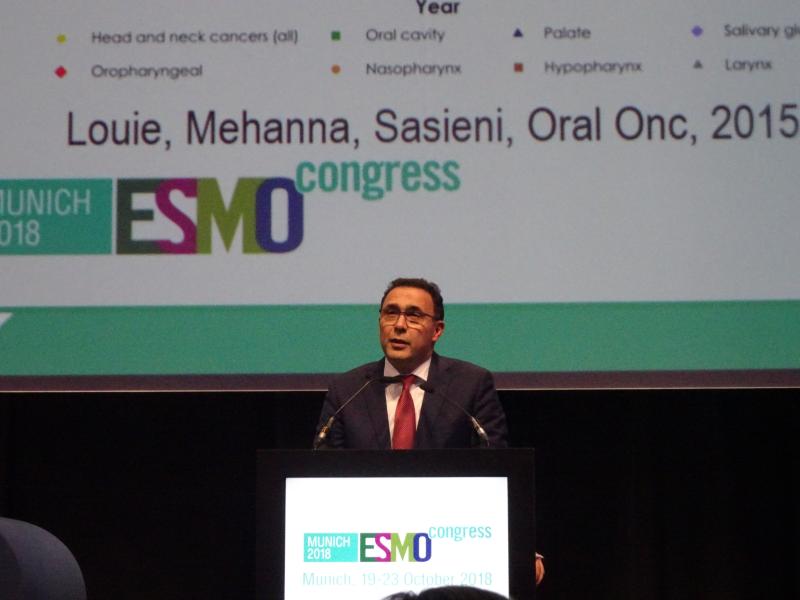 De-escalating therapy falls short of expectations to reduce toxicity in patients with low-risk human papillomavirus-positive (HPV+) oropharyngeal carcinoma, the De-ESCALaTE HPV trial has shown, supporting the current standard of care which is chemotherapy with cisplatin and radiotherapy.

“Many patients have been receiving cetuximab with radiotherapy on the assumption that it was as effective as chemoradiotherapy and caused less side effects, but there has been no head-to-head comparison of the two treatments [until this study],” said lead investigator Dr Hisham Mehanna from the Institute of Head and Neck Studies and Education at the School of Cancer Studies, University of Birmingham in Birmingham, UK.

In the De-ESCALaTE trial, cetuximab did not cause less toxicity and even resulted in worse OS. “Our study was not powered to identify a difference in survival,” Mehanna said. “We thought cetuximab would lead to the same survival rate but better toxicity. Hence, it was a surprise to find a significantly worse OS with cetuximab. There was an 8.1 percent difference in OS between cisplatin and cetuximab for a hazard ratio [HR] of 4.99. When it was adjusted, the HR increased to 5.94.  The number needed to treat to cause harm was 12. So, patients with oropharyngeal cancer who are HPV+ should be given cisplatin, and not cetuximab, where possible.”

The incidence of oropharyngeal cancers has been increasing in western countries, and this has been attributed to HPV. Patients with HPV+ oropharyngeal cancer tend to be younger. “They respond well to treatment but the corollary to that is they live for 3 or 4 decades … and have to withstand the treatment effects,” Mehanna said during the ESMO press briefing.

De-ESCALaTE enrolled 334 patients from 32 centres in the UK, Ireland, and the Netherlands, who were randomized to radiotherapy (70 Gy in 35 fractions) and either cisplatin (three doses of 100 mg/m2 weekly) or cetuximab (400 mg/m2 loading dose followed by weekly 250 mg/m2); 80 percent were male, average age was 57 years.  Eighty-four percent had stage I/II disease, while 16 percent had stage III disease.

There was no difference in mean global health status, quality of life or swallowing function between the cisplatin and cetuximab arms so was the mean overall adverse events (AEs). The incidence of acute severe or late severe toxicity (grade ≥3) AEs per patient (4.81 vs 4.82), so was all-grade toxicity (grade 1-5, 29.15 vs 30.05 events per patient), was similar between arms, respectively. Cisplatin did however result in significantly more serious AEs than cetuximab (162 vs 95).

The OS results for De-ESCALaTE echoed the findings of the US National Cancer Institute’s Radiation Therapy Oncology Group (RTOG) 1016 trial presented at the American Society of Radiation Oncology (ASTRO) 2018 meeting.  “What we’ve learned … cisplatin had a role in locoregional and distant metastasis control. Therefore, I would advise caution when using de-escalation treatments that reduce systemic chemotherapies,” Mehanna said. “Changes in the standard of care should only be done on the basis of high-level phase III comparative evidence … [Therefore] cisplatin remains the standard of care for HPV+ low-risk oropharyngeal cancer.”