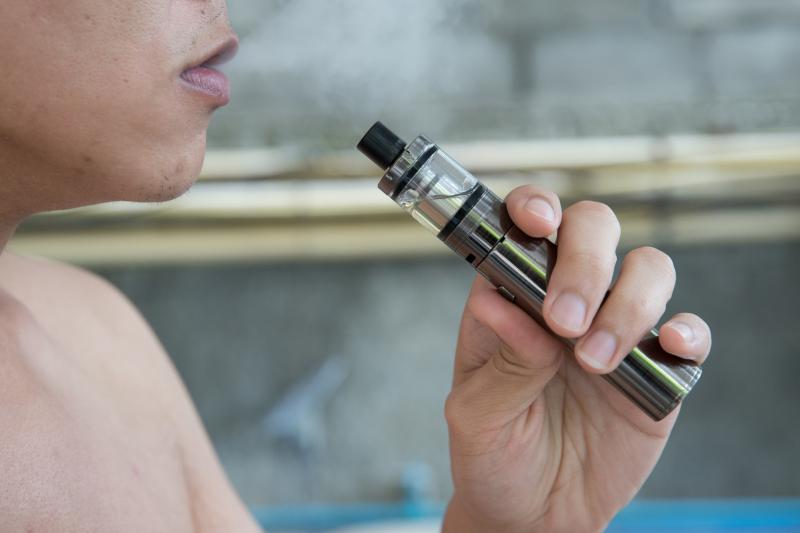 Fan worries smokers might switch to e-cigarettes as an alternative.

E-cigarette use remains low among adult patients with inflammatory bowel disease (IBD), and among these users, conventional cigarette smoking still remains prevalent, according to a recent study presented at the Crohn’s and Colitis Congress (CCC) 2020.

“Cigarette smoking can negatively affect treatment response in IBD patients, especially among those with Crohn’s disease (CD),” said researchers, noting that while it is widely considered as a safer alternative to conventional cigarettes, recent developments have brought to light potential harms associated with e-cigarette use.

“To the best of our knowledge, we currently do not know the recent smoking habits in American IBD patients, especially when it reveals that e-cigarette use might cause serious lung injuries,” they added.

An intermittent e-cigarette habit was slightly more common, with 2.6 percent of the participants reporting use during some days. This corresponded to a population estimate of 80,252 people. On the other hand, 2.4 percent of the respondents reported everyday use, corresponding to an estimated 71,768 daily users in a 3 million-people population.

The use of combustible cigarettes, in comparison, remained more popular. The overall prevalence of conventional smoking was 17.9 percent with a population estimate of 557,387 people. A daily habit was much more common than some-day smoking (15.3 percent vs 2.6 percent).

“While numerous studies show [that] e-cigarette use is generally increasing rapidly in the US, we found that 5 percent of IBD patients are currently using e-cigarette,” said the researchers, pointing out that concomitant use with combustible cigarettes was also relatively common.

“It is possible that most of the e-cigarette users are still in the process of transitioning from cigarette smoking and thus using both types,” they offered.

In the present study, the researchers retrieved participant data from the National Health Interview Study, a nationally representative survey of noninstitutionalized adults in America. Only those that had been diagnosed by their physicians as having IBD were eligible.

“We lack information on effects of using e-cigarette or both e-cigarette and cigarette in IBD treatment outcomes, as well as how e-cigarette use will complicate other health risks in IBD patients,” the researchers said. “We need further research on these effects to properly guide IBD patients who are in need of smoking cessation.”