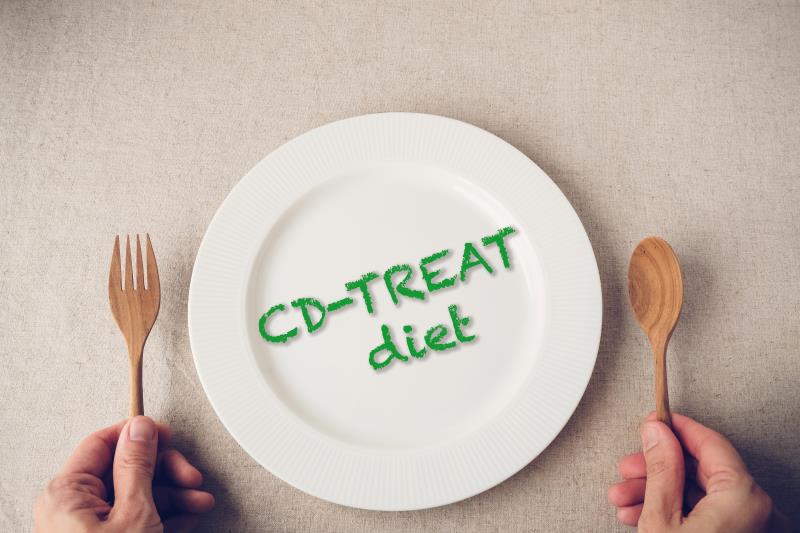 CD-TREAT* diet, a food-based diet with a similar dietary profile to exclusive enteral nutrition (EEN), induces clinical response or remission and improves quality of life (QoL) in children and adults with active Crohn’s disease (CD), according to a study presented at ESPGHAN 2022.

“EEN is an established [and a recommended first-line] induction treatment for active CD with a proposed mechanism of action involving the gut microbiome,” said Professor Konstantinos Gerasimidis from the University of Glasgow in Glasgow, Scotland, who presented the study.

“However, EEN comes with two major challenges,” Gerasimidis said. One is the amount of liquid formula required to achieve a better outcome – patients are required to consume 360 glasses or 120 litres within 8 weeks. The second issue is the rapid recurrence of gut inflammation upon discontinuation of the treatment.

Therefore, a better and more tolerable treatment that may also be used for long-term treatment of CD is warranted, noted Gerasimidis.

This open-label study involved 25 children (aged 14.4 years) and 32 adults (aged 32.6 years) who were diagnosed with active CD (wPCDAI** ≥12.5 [children] and HBI*** ≥5 [adults]). The participants were instructed to follow a CD-TREAT diet for 8 weeks. The meals were delivered to the participants’ doorstep. However, seven patients failed treatment, while 10 patients dropped out within the first 2 weeks of treatment due to palatability issues. The primary outcome of the study was clinical response (defined as wPCDAI fall ≥17.5; HBI fall ≥3) or remission (defined as wPCDAI <12.5; HBI <5). [ESPGHAN 2022, abstract G-O-048]

Of note, the adult cohort demonstrated a higher rate of clinical response (91 percent vs 76 percent) and remission (83 percent vs 71 percent) than the children cohort.

In patients with undetectable faecal GIP++, median faecal calprotectin (FC) level dropped from baseline to week 8 following the CD-TREAT diet, achieving a 50-percent reduction in FC (from 1,190 to 534 mg/kg).

Conversely, those with detectable faecal GIP had an increase in median FC level from baseline to week 8 (from 416 to 771 mg/kg). This indicates that these patients did not adhere to the CD-TREAT diet, which is a gluten-free diet, Gerasimidis said.

“CD-TREAT diet improved disease activity indices[, in terms of achieving clinical response and remission,] and QoL in the majority of patients who completed treatment, and decreased FC [level] in those who were most likely to be compliant,” said Gerasimidis.

“Future randomized controlled trials [are necessary and] should aim to compare CD-TREAT with other induction treatments [to] improve palatability, improve compliance, and reduce dropout rates,” he noted.