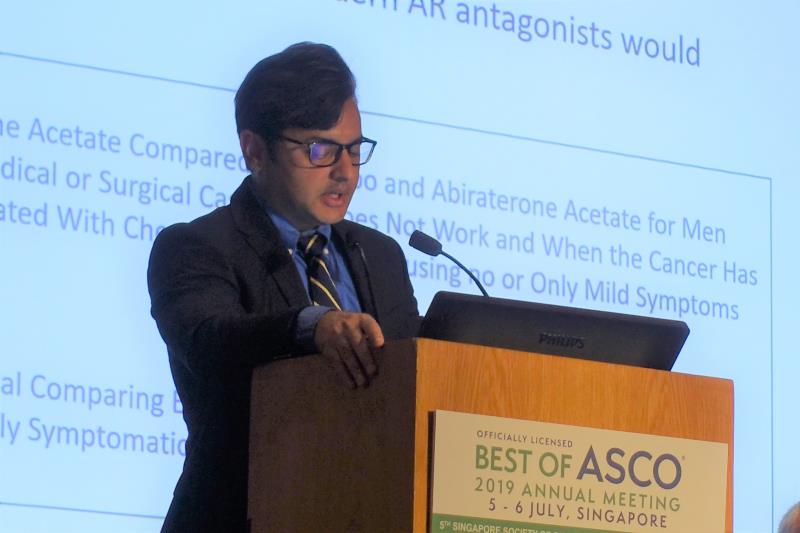 The addition of radium-223 (Ra223) to enzalutamide for the treatment of mCRPC* was associated with increased fracture risk, which was entirely abolished with mandated use of bone-protecting agents (BPAs) such as zoledronic acid and denosumab, according to interim results of the EORTC 1333 (PEACE III) trial.

“Pathological and nonpathological fractures are well recognized complication in advanced prostate cancers,” said Dr Akhil Chopra, from the OncoCare Cancer Centre Singapore, who presented the findings on behalf of the study investigators at the recent Best of ASCO (BASCO) 2019 Meeting in Singapore.

Skeletal fractures are a common and often underestimated side effect of systemic treatment for mCRPC, he pointed out. In the previous ERA223 trial which randomized 806 mCRPC patients to abiraterone acetate alone or in combination with Ra223, fracture rates were higher in the combination arm vs the abiraterone acetate alone arm (29 percent vs 11 percent). [Lancet Oncol 2019;20:408-419]

Subsequently, the trial was unblinded prematurely and was amended following a mandate to use BPAs for all patients in the study. The FDA and EMA also advised against using this combination.

Whether combining Ra223 with enzalutamide was also associated with an increased risk of fracture, and if the use of BPAs would protect against such risk was unknown.

The PEACE III trial, which compares enzalutamide 160 mg QD alone or in combination with Ra223 in 560 patients with bone-predominant mCRPC, also amended its protocol following the mandate to use BPAs after ERA223 unblinding. The interim analysis reported at the BASCO 2019 Meeting was on a safety population of 160 patients. In total, 55.0 percent of the cohort received BPAs during treatment for mCRPC. [BASCO 2019, abstract 5007]

“At 1 year, there was a 12.4 percent cumulative risk of fracture with enzalutamide that increased to 37.4 percent when Ra223 is added to enzalutamide [among patients unexposed to BPAs],” Chopra reported. Meanwhile, no fracture was seen in those with exposure to BPAs, regardless of treatments.

“With mandatory continuous administration of BPA starting at least 6 weeks before the first injection of Ra223, the cumulative risk at 1 year was abolished with 0 fracture on enzalutamide alone and 0 with the combination [therapy],” Chopra noted.

“This safety analysis confirms the importance of complying to international recommendations when treating mCRPC patients, and especially the importance of preventing skeletal complications in patients with bone metastases,” he highlighted.

“These early results strongly suggest that the risk of fractures is very well controlled in both arms when patients receive BPA,” added Chopra, who said the investigators are closely monitoring the study with ongoing recruitment and follow-up.