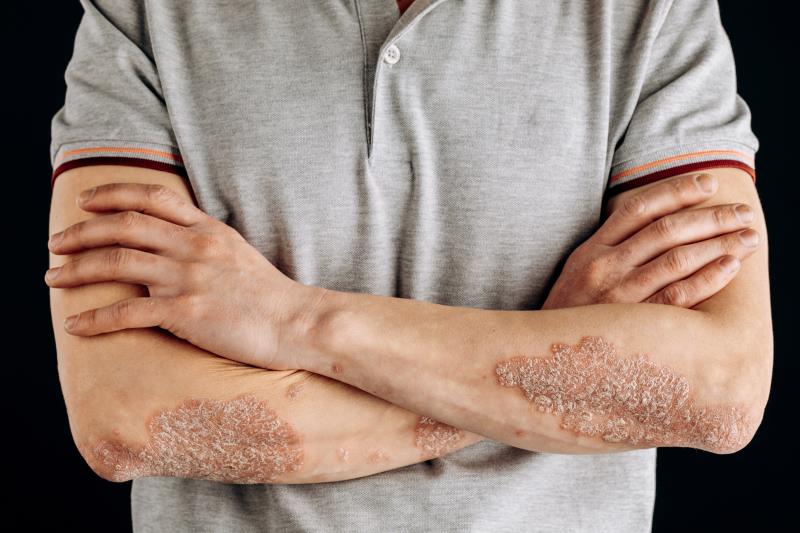 Patients with psoriatic arthritis (PsA) with no prior exposure to biological disease-modifying antirheumatic drugs (bDMARDs) experience improvements in their condition when treated with bimekizumab, according to results of the phase III BE OPTIMAL trial.

“The study met all of its primary and ranked secondary endpoints [at week 16],” presented study author Professor Iain McInnes from the University of Glasgow, Glasgow, UK, at EULAR 2022.

“Bimekizumab-treated … patients … showed improvements in joint and skin outcomes, as well as in the composite outcome of minimal disease activity (MDA), reflecting the efficacy of dual [IL-17A and IL-17F] inhibition across PsA disease manifestations,” he said.

Ninety-six and 95 percent of patients completed treatment at week 16 and 24, respectively (n=821 and 806, respectively).

A greater proportion of patients in the bimekizumab than placebo group achieved PASI90** (61.3 percent vs 2.9 percent; p<0.001). PASI90 was achieved in 41.2 percent of patients assigned to adalimumab.

ACR20 and ACR70 responses were maintained and consistent to week 24, remarked McInnes. “The placebo patients who crossed over onto bimekizumab rapidly recovered rates of response to be broadly similar to those patients who had already [responded] by week 16,” he added.

More patients on bimekizumab than placebo achieved MDA at 16 weeks (45.0 percent vs 13.2 percent; p<0.001), with responses improving in the placebo group upon switching to bimekizumab (48.5 percent vs 37.7 percent [bimekizumab vs placebo-bimekizumab] at 24 weeks). At week 16, bimekizumab also outperformed placebo in inhibiting structural progression both in the overall and at-risk*** populations.

None of the adalimumab recipients experienced Candida infections which occurred in 11 bimekizumab and two placebo recipients. There were no incidents of systemic candidiasis, major adverse cardiovascular events, uveitis, or inflammatory bowel disease, and no deaths. There was one incident of basal cell carcinoma in the bimekizumab group and one stage 1 breast cancer in the placebo group. At week 24, fungal infections were more common in bimekizumab than adalimumab recipients (5.7 percent vs 0.7 percent).

The responses of bimekizumab in this and the BE COMPLETE trial, which involved patients with inadequate response to tumour necrosis factor inhibitors, suggest that the benefits of bimekizumab for joint and skin outcomes are consistent irrespective of prior exposure to bDMARDs, concluded McInnes.