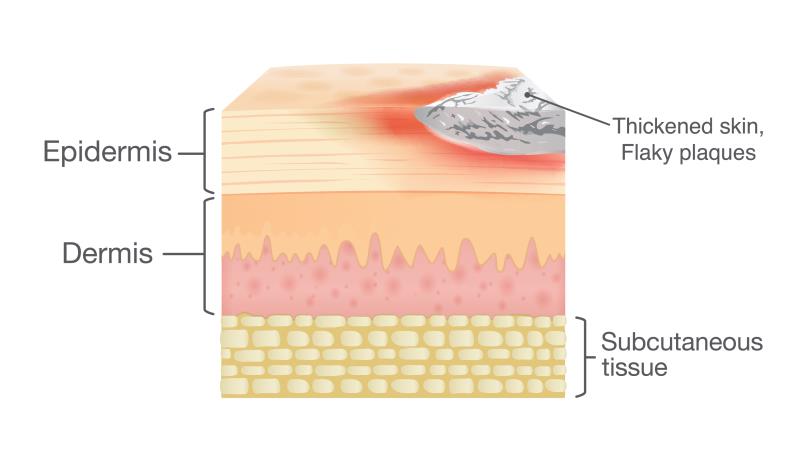 The pooled BE RADIANT* and BE SURE** cohorts consisted of 692 patients with moderate-to-severe plaque psoriasis who were given bimekizumab 320 mg Q4W through week 16 (initial treatment period). From weeks 16–48 (maintenance treatment period), 300 patients (mean age 46.1 years) continued on bimekizumab Q4W (Q4W/Q4W group), while 369 patients (mean age 44.9 years) were switched to bimekizumab Q8W (Q4W/Q8W group). Scalp IGA***, mNAPSI+, and palmoplantar (pp)-IGA scores were used to assess the effect of bimekizumab on psoriasis at these high-impact areas (ie, scalp, nail, and palmoplantar, respectively). [EADV 2021, abstract 1093]

Although the palmoplantar area is considered one of the hardest to treat, a high proportion of bimekizumab Q4W/Q4W and Q4W/Q8W recipients also demonstrated complete palmoplantar clearance (with pp-IGA score of 0) at week 16 (73.2 percent and 80.0 percent, respectively), which was maintained up to week 48 (80.4 percent and 80.0 percent, respectively).

Given that it takes a longer time for nails to grow, a smaller proportion of patients treated with either bimekizumab Q4W/Q4W or Q4W/Q8W regimen achieved an mNAPSI score of 0 (nail clearance) at week 16 (26.4 percent and 20.2 percent, respectively) when compared with other areas, though the proportion continued to increase through week 48 (59.6 percent and 65.3 percent, respectively).

“In conclusion, complete clearance of scalp and palmoplantar psoriasis was achieved by a high percentage of bimekizumab-treated patients at week 16, with responses sustained to week 48,” said lead author Dr Joseph Merola from the Harvard Medical School in Boston, Massachusetts, US.

“[Overall,] regional clearance of high-impact areas was comparable between [the] bimekizumab Q4W/Q4W and Q4W/Q8W maintenance dosing regimens,” he added.

*BE RADIANT: A study to evaluate the efficacy and safety of bimekizumab compared to an active comparator in adult subjects with moderate to severe chronic plaque psoriasis

**BE SURE: A study to evaluate the efficacy and safety of bimekizumab in adult subjects with moderate to severe chronic plaque psoriasis