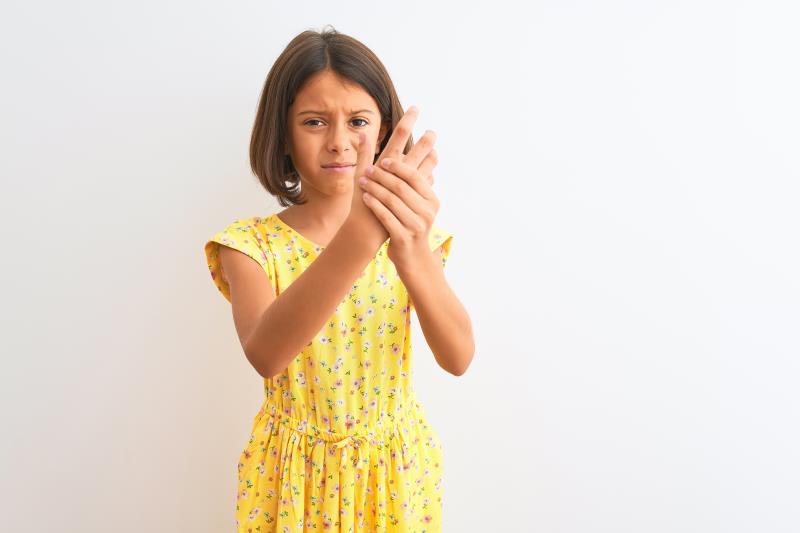 In patients with juvenile idiopathic arthritis (JIA) with insufficient response to conventional synthetic (cs) or biologic (b) disease-modifying antirheumatic drugs (DMARDs), the JAK*1/2 selective inhibitor baricitinib reduced the frequency and delayed time to disease flares, according to a phase III trial presented at EULAR 2022.

Participants were 220 patients aged 2 to <18 years (mean age 13.3 years, 69.1 percent female, 22.4 percent Asian) with extended oligo- or polyarticular JIA, enthesitis-related arthritis (ERA), or juvenile psoriatic arthritis (JPsA) who had an insufficient response to ≥1 cs and/or bDMARDs. The study had three phases, ie, a 2-week pharmacokinetic/safety assessment (PKS; n=29), a 12-week open-label lead-in phase (OLLI; n=219), and an up to 32-week double-blind withdrawal phase (DBW; n=163). Upon safety and dosage confirmation in PKS, patients enrolled in the OLLI phase and received oral, age-based doses of baricitinib once/day (equivalent to 4 mg QD). Patients who had a JIA-ACR30** response at the end of OLLI were randomized 1:1 to continue baricitinib or receive placebo until week 32 or a disease flare.

Mean duration since JIA diagnosis was 4 years, with mean age at diagnosis 9.3 years. Fifty-three and 58 percent of patients had prior exposure to biologic JIA therapy and methotrexate, respectively, while 33 percent had used corticosteroids. Mean Juvenile Arthritis Disease Activity Score-27 at baseline was 21.8.

Fewer patients in the baricitinib than placebo group experienced a flare at week 44 (17.1 percent vs 50.6 percent; p<0.001). This between-group difference was evident as early as within 4 weeks of switching from baricitinib to placebo (3.7 percent vs 23.5 percent).

During the PKS and OLLI phases, treatment-emergent adverse events (TEAEs) occurred in 57.3 percent of patients, and serious AEs in 2.7 percent.

Exposure to baricitinib was longer than to placebo (mean 26.34 vs 18.91 weeks), with the exposure-adjusted incidence of TEAEs numerically higher in the baricitinib than placebo group in the DBW phase (65.9 percent vs 46.9 percent). Serious AE rate was comparable between groups (4.9 percent vs 3.7 percent). There was one case of herpes zoster in the placebo group and one case of Candida infection in the baricitinib group. There were no cardiovascular events, uveitis, or deaths during the study.

During the DBW phase, the most common AEs in the baricitinib group were upper respiratory tract infection, headache, nasopharyngitis, and arthralgia (n=9, 9, 6, and 6, respectively), while in the placebo group, cough, headache, nasopharyngitis, and arthralgia were the most common (n=4, 3, 3, and 3, respectively). Two patients in the placebo group and one in the baricitinib group discontinued treatment due to AEs.

“Baricitinib significantly increased time to first disease flare and [reduced] the frequency of disease flares … in patients with JIA vs placebo, and improved JIA-ACR scores in the majority of patients within 12 weeks,” said study author Professor Athimalaipet Ramanan from the Bristol Royal Hospital for Children and Bristol Medical School, Bristol, UK, and co-authors.

“These findings support baricitinib as a treatment for signs and symptoms of JIA with an inadequate response to bDMARDs or csDMARDs,” said Ramanan. “These are very encouraging findings for our patients and parents and families of children with JIA in having an effective oral JAK1/2 agent for the management of children with JIA,” he concluded.