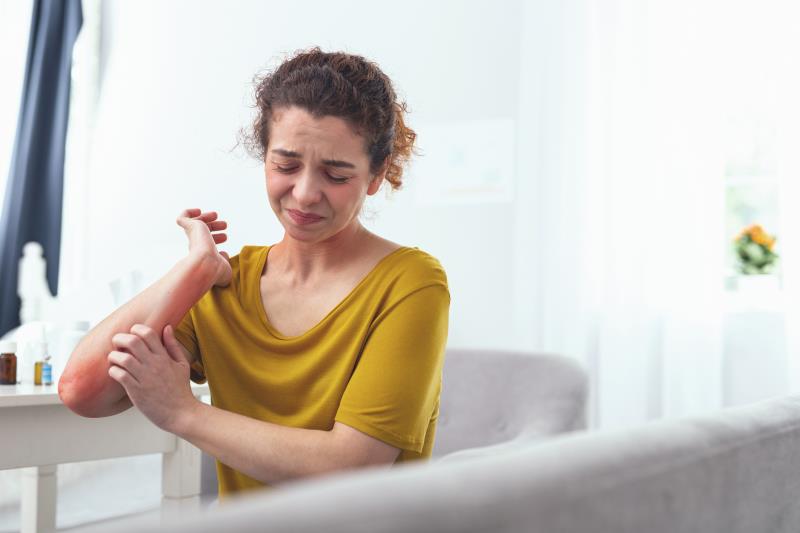 Although TCS is one of the mainstays of AD treatment, topical therapy may be inadequate for moderate-to-severe cases. [J Eur Acad Dermatol Venereol 2012;26:1045-1060; Allergol Int 2017;66:230-247] Moreover, topical regimens may not be sustainable for AD affecting large body surface areas. [J Am Acad Dermatol 2014;71:116-132] “Given the heterogenous nature of AD, [it is necessary] to identify novel treatments that target the underlying disease pathologic features, providing additional therapeutic options for patients,” said the researchers.

“[Although] vIGA-AD … is a stringent measure of response that takes into account the appearance of skin lesions … the assessment does not consider improvements in disease extent, itch, sleep disturbances, or quality of life (QoL),” noted the researchers. As such, these findings may not reflect a complete benefit with baricitinib.

In the evaluation of other prespecified secondary efficacy outcomes, itch improved with baricitinib 4 mg as early as 2 days after treatment initiation compared with placebo, based on percent change from baseline (CFB; least squares mean [LSM], –13.2) and CFB in Itch NRS** (LSM, –0.8; p<0.001 for both). These findings are important, as itch is a central, debilitating symptom of AD that significantly impairs QoL. [Ann Allergy Asthma Immunol 2018;121:340-347]

Use of baricitinib 4 mg also led to more TCS-free days (29 percent vs 13 percent) and significant reduction in the amount of background TCS used (LSM, –91.1; p<0.001) compared with placebo. “[These findings] mitigate concerns associated with continual or sustained application of topical treatments,” said the researchers. “Because AD is a chronic disease with recurrent flares, the addition of TCS to baricitinib could allow patients and physicians to escalate and reduce TCS therapy based on symptoms.”

Despite the higher treatment-emergent adverse event rates with baricitinib vs placebo (58 percent [4 mg] and 56 percent [2 mg] vs 38 percent [placebo]), serious AE rates across all arms were low (4, 2, and 4 percent, respectively). Fifteen cases of herpes simplex virus (HSV) infection were reported; nonetheless, HSV infection is known to be correlated with AD and baricitinib use, noted the researchers.

Taken together, the findings reflect the ability of baricitinib 4 mg plus TCS to improve signs and symptoms of moderate-to-severe AD, with a safety profile parallel to those seen in baricitinib monotherapy studies. [Br J Dermatol 2020;183:242-255] “[The monotherapy] studies validated the role of JAK1/2 signalling in AD pathogenesis … [The current findings] validate the clinical benefit of JAK inhibition in combination with TCS therapy – a regimen that more closely mirrors clinical practice,” they added.

The findings also imply that topical regimens may still be beneficial if used in conjunction with systemic therapy, noted the researchers. “Thus, combination therapy can be regarded as the current standard of care in AD management. However, it is desirable that the need to add topical therapies decreases with ongoing systemic therapy.”

Given the short treatment period, the ongoing phase III long-term extension trial BREEZE-AD3 may be able to elucidate the long-term efficacy and safety of baricitinib in this setting. [https://clinicaltrials.gov/ct2/show/NCT03334435, accessed December 2, 2020]