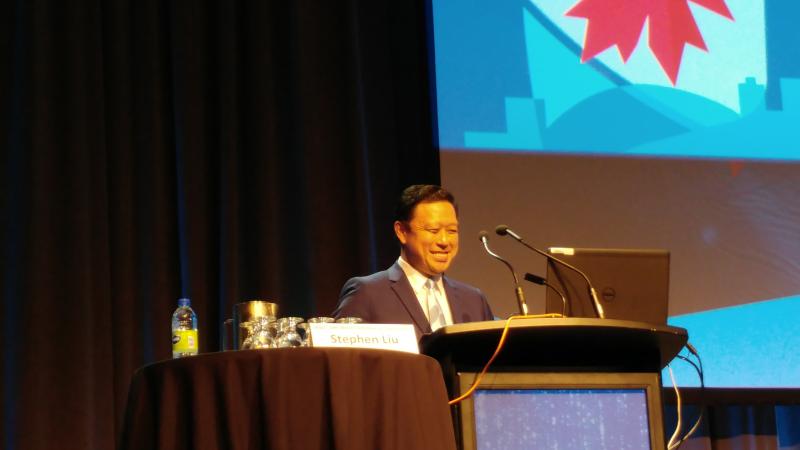 Atezolizumab, when added to standard-of-care chemotherapy, significantly improves survival of patients with extensive-stage small-cell lung cancer (SCLC) in the first-line setting, according to results of the IMpower133 trial reported at the International Association for the Study of Lung Cancer (IASLC) 19th World Conference on Lung Cancer (WCLC 2018).

“IMpower133 is the first study in more than 20 years to show a clinically meaningful improvement in overall survival [OS] vs current standard of care in the first-line treatment of extensive-stage SCLC. Our findings suggest that atezolizumab plus carboplatin and etoposide is a new standard of care in this setting,” said investigator Dr Stephen Liu of the Georgetown University, Washington DC, US. [Liu S, et a, WCLC 2018, abstract PL02.07; N Engl J Med 2018, doi: 10.1056/NEJMoa1809064]

In the study, 403 patients (median age, 64 years; 64.2–65.3 percent male) who had received no prior treatment for extensive-stage SCLC were randomized in a 1:1 ratio to receive four 21-day cycles of atezolizumab (1,200 mg intravenously on day 1) plus carboplatin and etoposide, or placebo plus the same chemotherapy. Following this induction phase, patients were maintained on either atezolizumab or placebo alone, according to their previous randomized assignment, until disease progression or loss of clinical benefit.

“After a median follow-up of 13.9 months, the co-primary endpoint of OS was significantly improved by 30 percent in the atezolizumab vs placebo arm,” reported Liu.

“OS favoured atezolizumab in almost all subgroups, except in patients with treated brain metastases at baseline,” Liu noted.

While the objective response rate did not differ significantly between the atezolizumab and placebo arms (60.2 percent vs 64.4 percent), the duration of response was slightly longer with atezolizumab vs placebo (median, 4.2 months vs 3.9 months; HR, 0.70; 95 percent CI, 0.53 to 0.92).

“The event-free rates at 6 months and 12 months were superior in the atezolizumab vs placebo arm [32.2 percent vs 17.1 percent and 14.9 percent vs 6.2 percent, respectively], as was the proportion of patients with ongoing response [14.9 percent vs 5.4 percent],” Liu noted.

In terms of safety, the investigators identified no new signals with the combination of atezolizumab plus carboplatin and etoposide. “Rates of haematologic adverse events [AEs] were similar between the two arms. The incidence and types of immune-related AEs were similar to those seen with atezolizumab monotherapy,” said Liu. “Administration of atezolizumab did not compromise the ability to deliver standard chemotherapy with carboplatin plus etoposide, as patients in both arms received the same number of doses of chemotherapy.”