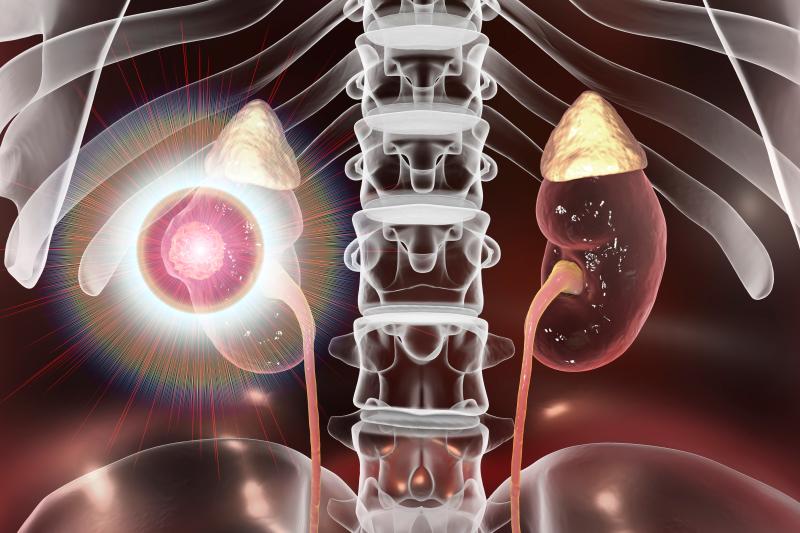 “These study results support atezolizumab plus bevacizumab as a first-line treatment option for patients with PD-L1-positive advanced RCC,” he said, when presenting the findings at ASCO GU 2018.

A total of 915 patients with previously untreated advanced or metastatic RCC were randomized 1:1 to receive intravenous atezolizumab (1,200 mg) plus bevacizumab (15 mg/kg) Q3W or oral sunitinib (50 mg QD on a 4-week-on, 2-week-off treatment cycle). Median duration of treatment was 12.0 and 9.2 months for patients on atezolizumab-bevacizumab and sunitinib, respectively. Forty percent of patients (n=362) had PD-L1-positive disease (n=178 and 184 on atezolizumab-bevacizumab and sunitinib, respectively).

The improvement in PFS among atezolizumab-bevacizumab vs sunitinib recipients was also demonstrated in the intention-to-treat (ITT) population (median PFS, 11.2 vs 8.4 months, HR, 0.83, 95 percent CI, 0.70–0.97).

Overall survival, though immature at time of analysis, was comparable between patients in the atezolizumab-bevacizumab and sunitinib arms in the ITT population (median OS not reached in either group, HR, 0.81, 95 percent CI, 0.63–1.03; p=0.09).

Treatment-related adverse events (AEs), both overall and grade 3–4, occurred at a lower rate among patients on atezolizumab-bevacizumab compared with sunitinib (91 percent vs 96 percent for all AEs and 40 percent vs 54 percent for grade 3–4 AEs), though more patients on atezolizumab-bevacizumab discontinued at least one treatment component due to AEs compared with those on sunitinib (12 percent vs 8 percent).

“With the introduction of checkpoint inhibitors, clinicians started looking at combinations of these medicines with anti-angiogenic medicines like bevacizumab [which] may affect the local immune response in the tumour and help prime the response of tumour and immune cells to immune-system activators like atezolizumab,” said Motzer, describing the benefits on combination therapy.

“For an aggressive cancer like this, where less than 20 percent of people survive 5 years after diagnosis, we think a 3.5 month longer PFS, given the tolerability for this new combination treatment regimen, is an important development,” he said.

“Adding immunotherapy to existing targeted therapies has shown promising results in recent clinical trials. We’re pleased to see validation of this approach through this large trial in advanced kidney cancer, a disease that remains incurable for most patients,” added ASCO expert Dr Sumanta Pal from the City of Hope National Cancer Center in Duarte, California, US, who moderated the ASCO GU 2018 presscast.