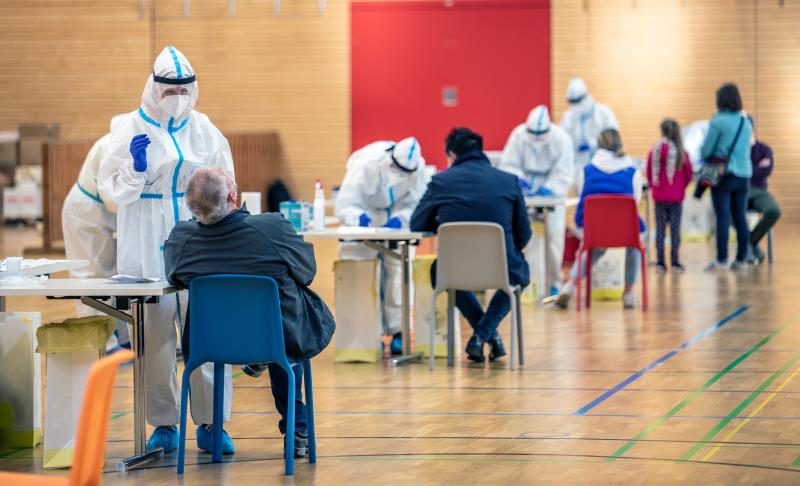 Same-day pre-event screening for SARS-CoV-2 using antigen-detecting rapid diagnostic tests (Ag-RDT) may enable the resumption of large-scale indoor events which were halted or had their attendance capacity reduced during the COVID-19 pandemic, according to a study from Spain presented at ECCMID 2021.

“Our study provides preliminary evidence on the effectiveness of same-day point-of-care screening with Ag-RDT, combined with [N95] face mask-wearing and active air ventilation, to create safe indoor environments with no need for physical distancing measures,” the authors said. “Our findings pave the way to reactivate cultural activities halted during COVID-19, which could have important sociocultural and economic implications.”

Adults aged 18–59 years (n=1,047) who tested negative on an Ag-RDT test from a nasopharyngeal swab done from 12 hours before a 5-hour indoor concert in Barcelona, Spain, on December 12, 2020, were randomized to either attend the concert (attendee) or return to normal life (control group). Included in the analysis were 465 attendees and 495 controls (mean age 33.6 years, 82 percent male). Attendees were inside the concert venue for a median 2 hours and 40 minutes.

The pre-event swabs were assessed using real-time reverse-transcriptase PCR (RT-PCR) and transcription-mediated amplification test (TMA). The Ag-RDT result was reported to the participants after 15 minutes through an app installed on their smartphones and the TMA results reported 24–48 hours post-event. Forehead temperature was assessed at the screening site and event entrance and participants received an N95 mask, use of which was mandatory during the event. The event location had a 900-person capacity and no physical distancing measures were enforced. Singing and dancing were allowed. A 20-person capacity outdoor smoking area was available with distancing and crowding measures enforced. Beverages were served in a different room (1,600-person capacity) with participants requested to remove masks only when drinking.

Eight days post-event, a second round of nasopharyngeal samples were taken and assessed via Ag-RDT, RT-PCR, and TMA.

Individuals with COVID-19 diagnosis in the 14 days pre-event, relevant comorbidities, or living with older people were excluded.

At baseline, 3 percent of patients in the experimental and control groups (n=13 and 15, respectively) had a positive TMA result (despite negative Ag-RDT results), all of whom had been diagnosed with COVID-19 within a median 50 days pre-event. One individual in each group tested positive on RT-PCR and none had positive cell viral culture results. The cycle threshold (Ct) value was 37 in both groups.

Both individuals with positive RT-PCR results also had positive Ag-RDT results and exhibited mild clinical disease. Twelve and 15 individuals in the experimental and control groups, respectively, had positive TMA results, of whom three and four were TMA-positive at baseline.

The negative predictive value of Ag-RDT screening was 99.9 and 99.8 percent for a positive RT-PCR and a positive viral culture, respectively.

Ag-RDT + other interventions: The way forward?

“Mass-gathering events are associated with a high risk of spreading SARS-CoV-2,” said the authors. Events such as concerts and sporting events were either cancelled or had their attendance capacity reduced to prevent infection transmission, an intervention which had a significant impact on local economies, they added.

Ag-RDTs for mass screening have multiple benefits over nucleic-acid amplification tests, including short turnover times and lack of need of laboratory referrals, they said.

“The study showed that the risk of infection was no higher among those attending the event than those who lived in the same community and did not attend,” said Professors Rosanna Peeling and David Heymann from the London School of Hygiene and Tropical Medicine, London, UK, in a commentary. [Lancet Infect Dis 2021;doi:10.1016/S1473-3099(21)00291-7]

The use of masks, adequate ventilation, prevention of crowding, availability of hand sanitizer, and limited movement within the venue may also have played a role in limiting transmission, the authors noted.

The results also highlight the lack of feasibility in using TMA as a screening tool prior to indoor events. “[Techniques like these] would exclude people that have had COVID-19 in previous weeks or months, and those who have recovered and no longer have the potential to transmit the virus,” they pointed out.

However, vaccination, changes in SARS-CoV-2 incidence, and new, more transmissible variants may affect the findings. As such, future studies that consider these factors are warranted.