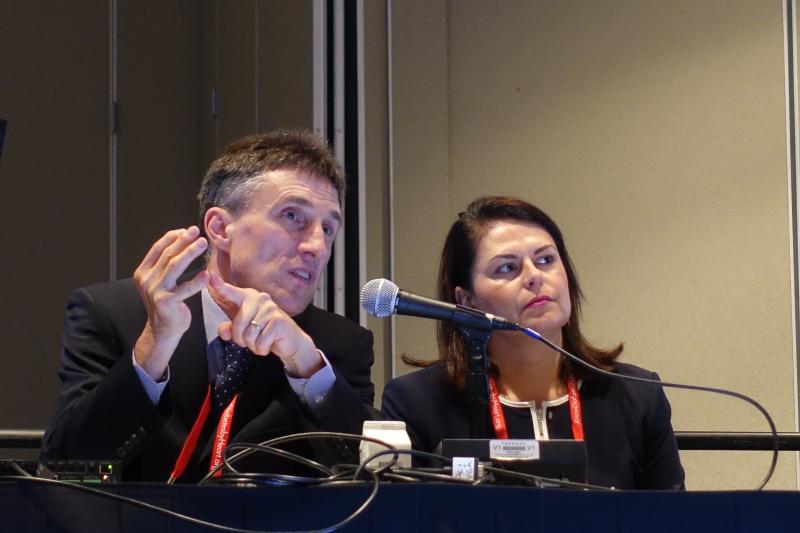 Emerging evidence is showing that the two major new classes of antidiabetic drugs — SGLT2* inhibitors and GLP-1** receptor agonists (RAs) — not only confer cardiovascular (CV) benefits to patients with type 2 diabetes (T2D), they also delay the loss of kidney function among these patients, potentially providing nephrologists with an additional tool in their armamentarium for managing patients with chronic kidney disease (CKD) in the future.

Specifically, the CANVAS trial saw a 30 percent reduction in the risk of 3-point MACE*** of nonfatal MI, stroke, and CV death with canagliflozin in the CKD population; while there were risk reductions of 29 percent for CV death and 39 percent for hospitalization for heart failure (HHF) with empagliflozin in EMPA-REG. [Circulation 2018;138:1537-1550; Circulation 2018;137:119-129]

Although reduction of atherosclerotic complications has been the main focus of recent major trials, renal disease has remained a recalcitrant problem in diabetes and is still on the rise.

While Wheeler noted that the renal endpoints examined in the major SGLT2 inhibitors CVOTs were diverse, the signals in renal benefits are “fairly consistent” in terms of reduction in albuminuria, CKD progression (as indicated by eGFR#), and end-stage renal disease (ESRD) events.

It was also revealed in the latest findings from DECLARE-TIMI 58, released in conjunction with the ADA 2019 Meeting, that the prespecified renal outcome of a sustained ≥40 percent decline in eGFR was 46 percent lower and the risk of ESRD or renal death was 59 percent lower with dapagliflozin vs placebo. [Lancet Diabetes Endocrinol 2019;doi:10.1016/S2213-8587(19)30180-9]

“There were consistent reductions in renal endpoints in these trials, with suggestion of attenuation of renoprotection at lower eGFR levels,” observed Wheeler.

Noting that the glycaemic benefit of SGLT inhibitors was also greater in those with more preserved eGFR (≥90 percent) as reported in a meta-analysis of the three major CVOTs above, [Lancet 2019;393:31-39] Wheeler said this suggests that the renoprotective effect of the drugs was independent of glycaemic benefit. “Renoprotection likely results from haemodynamic changes and may be independent from reductions in HbA1c.”

Consistent with the evidence from SGLT2 inhibitors, CVOTs with GLP-1 RAs also showed renal benefits with this drug class. The risk of composite renal outcomes+ was reduced by 22 percent (p=0.003) with liraglutide vs placebo in the LEADER trial, which was driven mainly by new-onset persistent macroalbuminuria (hazard ratio [HR], 0.74; p=0.004). [N Engl J Med 2017;377:839-848]

However, she cautioned that the findings were not from dedicated renal outcome trials but from CV safety trials, in which renal outcomes are secondary endpoints. “Bear in mind that the population has largely preserved renal function, with preserved eGFR and minimal albuminuria,” she continued.

The same sentiment was echoed by Wheeler, who said, “Most trials exclude patients with advanced CKD, the very patients that nephrologists get referred.”