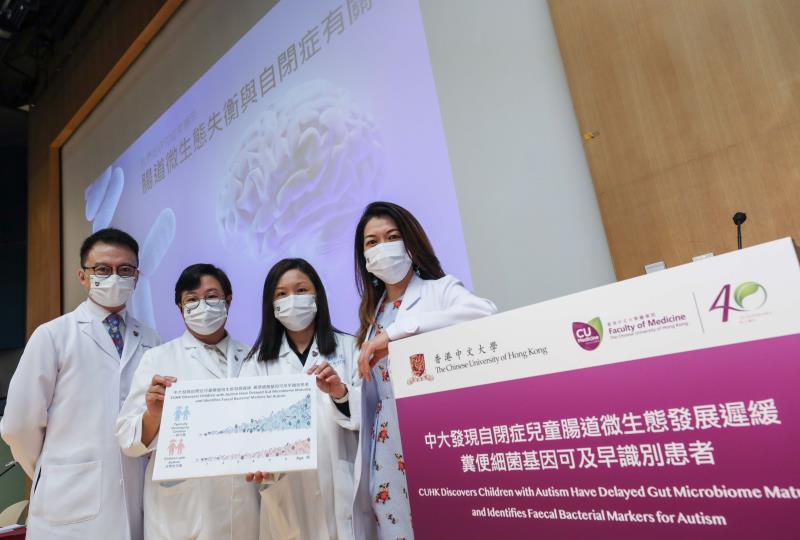 Researchers from the Chinese University of Hong Kong (CUHK) have found an altered and underdeveloped composition of gut microbiome in Chinese children with autism-spectrum disorder (ASD) and identified novel bacterial markers for ASD prediction.

“The community of microorganisms in the gastrointestinal [GI] tract is known to influence brain physiology and social behaviour via a diverse set of pathways, including immune activation, production of microbial metabolites and peptides, and production of various neurotransmitters and neuromodulators,” wrote the researchers. [Cell 2021;184:1740-1756; Science 2019;doi:10.1126/science.aar2016] “Given that the gut microbiome has been linked to brain function via the gut-brain axis, we hypothesized that an underdeveloped gut microbiota may be associated with ASD.”

A total of 64 preschoolers aged 3–6 years with a diagnosis of ASD and 64 age- and sex-matched typically developing (TD) preschoolers participated in the study. The researchers first examined associations between host factors and children’s faecal microbiome composition. “Our data indicate that chronological age, ASD and body mass index [BMI] – but not diet – were the main factors associated with gut microbiome variation in this cohort,” they wrote. [Gut 2021;0:1-9]

Five bacterial species accounted for most of the microbiota differences between ASD and TD children, namely, Alistipes indistinctus, candidate division_TM7_isolate_TM7c, Streptococcus cristatus, Eubacterium limosum and Streptococcus oligofermentans. To validate them as biomarkers, the researchers obtained faecal metagenomes from an independent cohort of eight children with ASD and 10 TD children recruited in Hong Kong. Validation results indicated that compositional differences in gut microbiota have a diagnostic accuracy of approximately 80 percent and could serve as an early and noninvasive screening tool for ASD.

“Diagnosis of autism is currently carried out when signs of atypical social and language development appear. This is not satisfactory, as earlier diagnosis and treatment of autism provide greater and longer-lasting effects. Research has shown that if children with ASD get early intervention, they are less likely to need intensive support in elementary school and beyond,” commented co-author Dr Dorothy Chan of the Department of Paediatrics, CUHK.

The study also found that several Clostridium species linked with ASD via production of clostridial toxins, which have pathological effects on the central nervous system, were enriched in ASD children’s samples and closely interacted with each other, forming a connected group. [PLoS One 2013;8:e76993] Furthermore, pathways related to neurotransmitter biosynthesis were decreased in the gut microbiome of children with ASD. Finally, the researchers found that while the relative abundance of various bacterial species decreases (eg, Eubacterium limosum and Bifidobacterium breve) or increases (eg, Eubacterium brachy and Haemophilus parainfluenzae) with age in TD children, these associations were absent in children with ASD, suggesting abnormal development of the gut microbiota during early life.