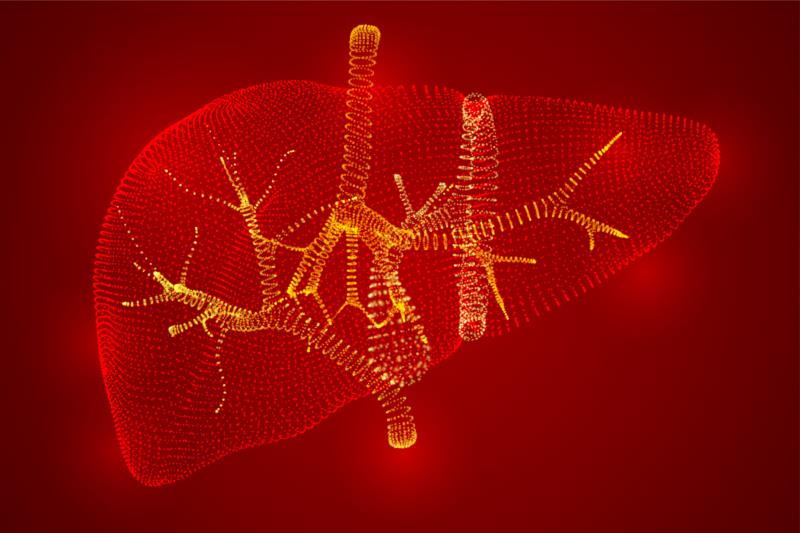 Treatment with the FGF19 analogue aldafermin, previously known as NGM282, led to significantly reduced liver fat content (LFC) in patients with nonalcoholic steatohepatitis (NASH), according to a study presented at ILC 2020.

At week 24, patients treated with aldafermin achieved a statistically significant reduction in LFC from baseline, as measured by MRI-PDFF**, compared with placebo (-39.0 percent vs -13.0 percent; p=0.002).

In addition, a significantly higher percentage of patients on aldafermin achieved an LFC reduction of ≥5 percent (absolute reduction 68.0 percent vs 24.0 percent; p<0.001) and ≥30 percent (relative reduction 66.0 percent vs 29.0 percent; p=0.004) than those on placebo. “Consistent response on LFC [was observed] across cohorts 1–4,” said lead author Dr Stephen Harrison from the University of Oxford in Oxford, UK, and Pinnacle Clinical Research in San Antonio, Texas, US.

Significantly more patients treated with aldafermin than placebo also achieved a NAS reduction of ≥2 points with no worsening of fibrosis (62.0 percent vs 9.0 percent; p<0.001).

A significant decrease from baseline in alanine aminotransferase (ALT) levels was observed in the aldafermin vs placebo arm at week 24 (-49.0 percent vs -6.0 percent; p<0.001; ALT levels decreased from 73 to 31 IU/L and from 55 to 49 IU/L in the aldafermin and placebo arms, respectively), which was near normal ALT levels, Harrison noted.

Treatment-emergent adverse event (AE) rates were generally comparable between the aldafermin and placebo arms (86.8 percent vs 88.0 percent), with two serious AEs (rectal bleeding and liver biopsy procedure-related complication) occurring in the aldafermin arm. However, these were not considered treatment related by the site investigator.

“Ultimately, the primary endpoint was met,” noted Harrison. “Cohort 4 data [also] suggest that the histological effects previously observed at 12 weeks are durable and potentially amplified with extended treatment [of 24 weeks, with] … a favourable tolerability profile that appears to be safe and … well tolerated.”

“Clinically significant improvements in histology regulatory endpoints of fibrosis improvement, resolution of NASH, and the composite endpoint requiring achievement of both are very positive,” he highlighted.